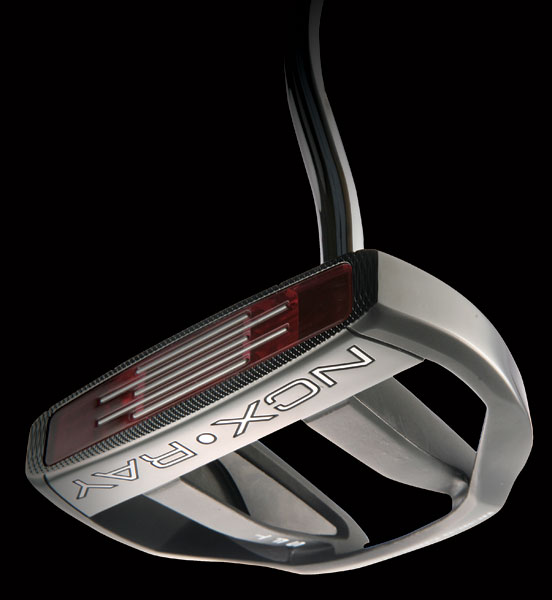 Never Compromise’s new NCX-Ray putter line features one of the most radical faces we’ve ever seen. Not only does it boast a striking red dual-density insert, it also uses something called Suspended Face Technology (SFT). SFT features embedded ribs in a soft composite. The result? Reduced vibration at impact and just the right feel that makes even the hardest golf balls feel soft.

While its visual and tactile qualities are second to none, its ultralightweight face material also reduces the club’s centerweighting by 25%. And that, of course, produces a higher MOI that keeps the club square at impact.

Another advantage is its deep CG. The X-Ray mallets repositioned 80 grams of weight, a move that pushed the CG 18% deeper (the blade models were moved about half that much). Four models available, Sigma shown. $149.

At least 85% of the Rife IMO’s ($149) head weight is located in the middle 40% of the club. That means most of the putter’s mass is directed into and through the ball.

The IMO is easy to keep balanced and swing on your desired path, and that leads to more consistent putts.

The Nickel Putter ($295) features a CNC-milled aluminum putterhead (it’s named Nickel after its designer). Two lead weights totaling 70 grams directly behind the face make for a truer stroke. Its coolest feature, though, is an integrated ball marker/ball retrieval component that allows you to mark and pick up your ball at the same time. There’s also a grip-end ball grabber. Never bend over again! USGA-approved._Ê

Heavy Putter’s MID-WEIGHT Series ($169) has less weight in its putterhead than previous models, but has more than most other flatsticks (250 grams)–just the thing if you suffer from the yips. Comes in five models with a silver satin or black PVD finish. (CX2 model shown with plumber’s neck

Built with a Pure Power Sole Unit, the Hi-Tec Pure Power i ($199) helps to ensure that your foot moves in a more comfortable and stable way. Its Variable Chassis Thickness (VCT) provides the sole and cleat with more surface contact with the ground, so you can move without compromising flexibility. Available in three colors. {mospagebreak}

Geox‘s new ProTechs ($200) include a breathable, waterproof membrane and moisture-wicking fabrics that not only make them comfortable, but help to get rid of moisture. Comes with Trisport cleats and a Fast Twist insert system for maximum traction. With leather uppers.

FootJoy delivers its most stable line of shoes ever with the SYNR”G ($220). Pronounced “synergy,” the line features a high-performance G-Force outsole that took two years to develop and is just the thing for golfers who crave maximum support. Available in four styles.

Compact, easy to use and inexpensive. That pretty much sums up the new Swami GPS ($150) unit by Izzo. But we like its large display and no-nonsense buttons–perfect for those who prefer their technology spartan. Holds information for 10 courses at a time and comes with a belt clip, charger, USB cable and instructions.

The new, asymmetrical Mibrella ($50-$60) (think “MY umBRELLA”) reimagines what an umbrella is. A forward shaft places the golfer in the center of its canopy, creating extra coverage for both golfer and golf bag. Comes with a “load and go” cart clamp ($40) that allows you to mount it and keep it open in between shots. Features a UV barrier and pushcart mount. Available only in pro shops.

Winner of Golf Channel’s Fore Inventors Only competition, the deceptively simple Club Caddy ($15) might look like a giant clothespin, but in reality

it’s a miniature caddy. Just clip it to your club’s shaft near the hosel and set it on the ground. It keeps your clubs upright and your grips dry and eliminates the need to bend over and pick up your clubs.

The waterproof Rule Twenty-One ($20) back-pocket golf towel fuses an absorbent Bamboo Terry Layer with a soft-feel waterproof shell and makes it easy to clean your golf ball and clubface without dirtying your pockets. It will be one of the most economical additions to your golf gear. {mospagebreak}