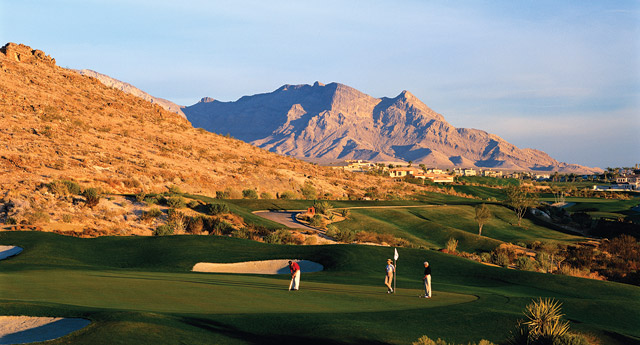 BOXGROOVE
If you've ever wanted to play a private course but just couldn't get on, you may have finally found your "in." A new service called Boxgroove affords its members a chance to play on private courses all over America. As of May 2011, 357 private courses in 45 states are participating, including Moon Valley CC (Phoenix), Riverview (Redding, Calif.), The International (Bolton, Mass.) and Red Rock (Las Vegas, shown). Standard and value memberships available. For more information, visit boxgroove.com.

MIURA
It's not every day that a new set of irons is introduced by Miura. But when they are released, it's cause for industry watchers to perk up. The Japanese manufacturer introduced their forged, game-enhancement Passing Point 9003 ($225/iron) irons on April 1, and they're no joke. The elegantly shaped cavity-back irons feature a wider sole, which will appeal to all players, and a progressive offset. Just the sticks golfers seeking a higher trajectory will love. Comes in 4-iron through GW in right-hand only. miuragolf.com

TITLEIST
Any new offering from Titleist is worth mentioning, especially when it comes from wedge guru Bob Vokey. This spring saw the release of his new 200 Series wedges ($140) in the company's Wedgeworks lineup. The new clubs feature a classic head shape with a high toe peak and a soft trailing edge, something that Vokey says "keeps the club from getting stuck in the turf." With a bright brushed-chrome finish, the wedges come in a variety of loft/lie combos (46_¡-60_¡) and feature Spin Milled Condition of Competition grooves that comply with the USGA wedge ruling. vokey.com

FOOTJOY
Featuring a proprietary waterproofing system called ECL (Extreme Comfort Leather), the DryJoys Tour ($170) from FootJoy guarantee that no water will penetrate your shoes for at least two years. But that's not all these ultracomfortable and supportive new kicks feature. Look for full-leather linings, a polyurethane foot bed for super cushioned comfort and Cyclone cleats that grab the ground and won't let go. Comes in eight different color options, including White Smooth/Brown Gator (shown). footjoy.com

ASHWORTH
Looking for a golf shoe that won't look out of place in the clubhouse? Consider Ashworth's new Cardiff shoe ($120). Its molded rubber (and spikeless) sole combine with tumbled leathers and rich suede accents to take the Cardiff from the course to the clubhouse and beyond. Available in navy, white and black. ashworthgolf.com

ROYAL COLLECTION USA
As some of you know, Sonartec has been rebranded as Royal Collection USA, and the Japanese company recently released the JP104 series of woods. The driver ($440) features a driving cavity, strong CG and variable-face thickness for a thicker, circular sweet spot; the fairway woods ($250) have a shallow, wide profile for added forgiveness; the stainless-steel JP104 hybrid's ($220) wider sweet spot makes it easy to escape the toughest lies; and JP104FH hybrids ($250) launch the ball like a fairway wood but with the control of a hybrid. We're glad to see these clubs back on the market. They're for better players, and solid ballstrikers will see a big payoff when they make pure contact. royalcollectionusa.com

On the heels of last year's white ZL Driver, Cobra Golf introduces its white S3 Driver ($475). Like its black S3 cousin, the new, limited-edition driver features E9 Face Technology, which increases its sweet spot by 30%. It also affords better players the ability to alter their ballflight and shape via its Adjustable Flight Technology. Comes with an all-white Aldila RIP Beta shaft and white Golf Pride Tour Wrap 2G grip. Available in lofts of 9.5_¡ (S-flex) and 10.5_¡ (S- and R-flexes); 9.5_¡ in left-handed. cobragolf.com

BOLLE
The new Zander ($100) frames from Bolle feature something the company calls "EagleVision." What's that? A technology that optimizes contrast in the green portion of the spectrum and results in an enhanced view of green nuances. Just the thing golfers need to see better on the links. But that's not the only feature the golf-specific Zander boasts. Note the semi-rimless lens. That provides unobstructed views when addressing the ball. Smart. bolle.comSmart. bolle.com

NEVER COMPROMISE
Remember the sweet Gambler series that Never Compromise introduced earlier this year? Well, they're back with another flashy, high-end offering called "Dinero" ($299+). While the Gambler series featured Vegas-inspired artwork on the sole and hosel, the 303 stainless-steel Dinero boasts global currency symbols like the $, £, ¥ and €. What do we think of them? They're money baby, money. Custom options available include grips, paint fill, length and lie. nevercompromise.com

PIRETTI
The Texas-based Piretti Golf has released two new putters. The 365-gram Matera ($285) is designed for players who like a wider profile, but don't like to look at the lines of a deep pocket in the flange of the putterhead. Comes in a PVD black finish and a single or triple sight line or a sight dot. Like the Matera, the blade-style Potenza ($285) is milled from a solid billet of 11L17 carbon steel. The Potenza has a flow neck with half shaft of offset preferred with this style head. We're big fans of this young boutique company, and it's great to see more new models after last year's sweet debut lineup. piretti.com

TAYLORMADE
This Est 79 series ($100), a handsome new value line of putters from TaylorMade boasts four blades and two mallets and are made from 303 stainless steel. Weighing a healthy 345 grams, they come in three lengths (33", 34" and 35") and feature a Surlyn PURE ROLL insert for a soft feel and true roll. Quality-looking stuff at a discount price. Nice! taylormadegolf.com

YES! GOLF
When Yes! Golf filed for bankruptcy last December, fans of their C-Groove putter line worried that they'd never be able to pick up one of the company's flatsticks again. Fortunately Adams Golf purchased the company in an auction a month later. So if you're in the market for one of their eight putter models (three new putters are debuting, including the Christina, shown), rest assured. They're available for immediate shipment anywhere in the U.S. yesgolf.com

The game's best putters often stick a tee in the green and putt to it. This helps narrow their focus to a small point and makes the hole look that much bigger when they play. But the creators of Dead Center Putting ($10) say that doesn't help ingrain good speed control. So they've developed a new training aid that does. Simply place the DCP's insert ring in a golf hole and add either the beginner disk or the advanced disk to change the width of the opening. You can change the shape of the disk to alter which angle your putt approaches it from, so you can then lag putts at the proper speed. deadcenterputting.com

While video swing analysis has become de rigueur among instructors, putting analysis has mostly been relegated to high-end fitting studios. The folks at PuttingShark ($379) hope to change that. Their new portable putting analyzer and simulator records and measures one's putting stroke–clubface angle, swing path, angle of attack, club speed and sweet spot deviation–so you know exactly what kind of contact you're making. Simply connect it to your computer and start draining putts from everywhere. puttingshark.com

TRUE linkswear Gears Up for Record-Setting 2022