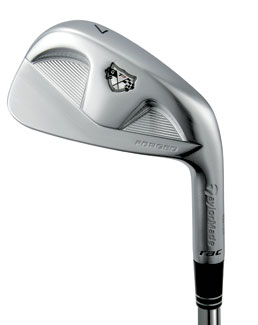 Now Playing: TaylorMade rac MB TP Irons
Who said musclebacks have to be plain in shape? The new rac MB TP Irons ($1,200/3-PW) from TaylorMade Golf feature the company’s usual high-tech spin on innovative new golf equipment, this time in the shape of a Tour-proven muscleback. Played by such names as Retief Goosen, Fred Funk and John Daly (how’s that for a threesome?), the rac MB TP irons were designed with heavy input from several touring professionals who prefer minimal offset and a high center of gravity for the kind of workability and controlling ballflight that’s demanded by the world’s greatest players.

The forged carbon steel rac TP MB irons feature a thinner topline and more compact size and shape than the previous rac TP irons, as well as enlarged, second-generation feel pockets to promote a softer feel. Each iron also has a milled

Sometimes it helps to look at an iron from every angle, especially from above and below, to really see if a particular iron suits your ability and demands. In the case of TaylorMade Golf’s rac MB TP irons, each iron features a thin sole design, which creates a somewhat higher CG than thicker-soled irons, resulting in not only a lower trajectory but greater ability when it comes to shaping shots. From above, one can see not only limited offset but a thinner topline, which better players prefer when it comes to iron shape aesthetics. Now, if improved workability and a higher CG aren’t to your liking, TaylorMade also offers several irons that feature thicker sole widths, lower CGs, more perimeter weighting and greater offset for players who want the most in forgiveness, distance and improved spin.

Power Tools
In a mere 10 years, the average driving distance on the PGA Tour has exploded from John Daly’s 288-yard average in 1996 to a whopping 319-yard average held by the longest guy ever on Tour, Bubba Watson. We’ve seen several PGA Tour players hit the ball unprecedented lengths this year, so it’s no doubt that today’s equipment has helped professionals hit a long way.

But what about the rest of us mere mortals? Can today’s drivers do for the average player what they have done for the best players in the world? Granted, you may not challenge Bubba Watson’s leading average of nearly 320 yards per drive, but a few extra yards is definitely not out of the question with one of today’s exciting new drivers. The key in deciding which driver works best for you has to do with first determining what clubhead you prefer, what loft is suited for your swing and, finally, what shaft length, weight and flex are best fit for your swingspeed and tempo. Also, be sure not to forget grip and grip size, as bigger grips promote less hand rotation than skinnier grips do. 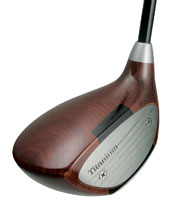 Together At Last
No really–titanium and persimmon can coexist. Featuring a combination of persimmon and titanium, the new SMART ti driver ($369) from Louisville Golf is one of the most unique drivers ever made. Not only does it feature the built-in, spin-correcting gear effects and soft sound that persimmon provides, but it has also tacked on a few more yards of distance. By using a recessed cavity behind the titanium clubface insert, Louisville was able to increase the SMART ti’s COR to a level that’s higher than any other persimmon driver tested by the USGA. In sum, it’s an absolute blast to hit and unbelievably accurate. For more information and to check out all of Louisville Golf’s persimmon products, visit www.louisvillegolf.com.

Teego
If you’ve ever been to one of those high-tech driving ranges where your ball pops out of the ground onto the tee, then you know how good it feels to not bend over and tee up another ball. The makers of the Teego ($99) had the exact same experience in mind when they developed their portable golf ball dispenser. Not only does the Teego go anywhere, it’s very durable and works with any type of tee and holds a total of 150 golf balls. But its best feature might be how it works. The Teego is gravity-driven, so there’s no need for batteries or electrical plugs. Optional accessories also include a driving mat, practice net and X-Tees that work with the Teego system. For more information, visit www.teego.com._Ê

Big Bender
One of the most popular training aids ever, the Medicus iron has helped hundreds of thousands of golfers better their iron swing mechanics by way of a hinging feature in the shaft. The new Medicus Dual Hinge Driver ($159) does the same for longer shots, helping golfers stay on-plane, monitor proper tempo and wrist cock and more. By allowing the golfer to see instant feedback, the Medicus Driver enables golfers to groove proper fundamentals into the swing and, when a fault occurs, the shaft bends and the swing must be repeated from the start. Right- and left-handed models are available in what’s likely to be another one of golf’s most popular training aids. For more information, visit www.medicus.com.

Here at Golf Tips, it’s our responsibility to advise you, the reader, about the new and exciting clubs, components and training aids that will have the biggest impact on your game. But once a month, we like to open the doors to our readers and see what they think.

1 What new club has made the biggest impact on your game and why?
A: Sonartec MD Transition
“For a long time, the gap between my fairway woods and irons was causing me trouble, especially on long par-3s and tough approaches on par-4s. I couldn’t bring myself to muscle a long iron shot, and I didn’t like swinging easy with a fairway wood. The Sonartec MD Transition filled the distance gap between 200 and 220 yards, from both the fairway and off the tee. Also, it’s a money club for hitting bump-and-run shots around the green.”
–Steve, Newport Beach, Calif. (6 handicap)

2 What training aid has helped you the most?
A: Momentus
“I’ve tried a lot of training aids, many of which have helped me learn better swing mechanics. But finding a training aid dedicated toward helping me improve my tempo, loosen muscles and stay on-plane has really made a difference in my game. The heavy-weighted Momentus Swing Trainer also helps me ingrain a more consistent swing plane, which I need to prevent myself from swinging too much from the outside-in. It really limbers me up before I head out to the golf course.”
–Richard, Eugene, Ore. (8 handicap)

3 What’s the best driver you’ve hit, and what makes it so good?
A:_Ê Mizuno MX-500
“Mizuno has been best known to produce high-quality stuff for better players, but one swing with the MX-500 convinced me that Mizuno is out to help everyone play better. I’m not sure how it works, but the carbon crown and titanium face help me hit the ball higher, farther and straighter than I did with my old driver. I miss the “clack” sound of the all-titanium drivers, but even with the muted “thump” sound of the MX-500, it’s still the best driver I’ve played.”
–John, Camarillo, Calif. (15 handicap)_Ê

4 How much time do you spend practicing your short game vs. your long game?
A: 30/70
“In my foursome, I’m known for having a very good short game. But as far as practice time is concerned, I hit balls maybe 70 percent of the time, and hone in on my short game 30 percent of the time. My secret to success is, I actually practice my short game every day! Whether in the office or at home, I make an effort to swing a wedge or putter at least once a day. By keeping a short club in my hands as often as possible, I’ve been able to develop a better feel and I’ve become more accustomed with each club. More familiarity leads to more confidence, which then leads to lower scores!”
–Ryan, Seattle, Wash. (3 handicap)