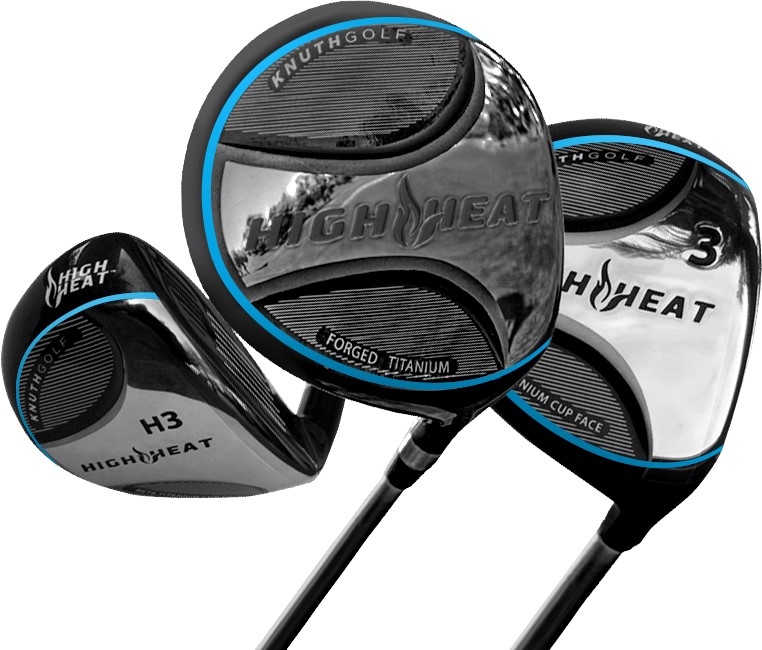 When a long drive champion tests a new big stick and comes away with a hearty thumbs-up, it’s time to take notice. So it was when Sean “The Beast” Fister hit the Trackman with Knuth Golf’s High Heat driver.

At the request of High Heat designer Dean Knuth, Fister throttled back his swing speed to a more realistic “amateur” level of 100 mph and did his best to avoid what’s commonly thought of as the “sweet spot,” concentrating on the toe and heel hits that all but a handful of avid golfers manage more often than not.

The result, according to Knuth’s numbers? Armed with Knuth’s patent-pending Optimal CG Game Changer and Fire Zone Face Technologies — which expands the sweet spot to basically the entire face by reducing the average thickness of the toe and heel areas by 30 to 40 percent — the High Heat driver produced ball speeds of 1.41 times the average swing speed (known as the “smash factor”) compared to the major brands’ average of 1.3. That translated into more than 20 yards extra distance, and the data is similar for the 3-metal too.

In fact, the 1.41 smash factor produced in High Heat’s tests on toe and heel strikes surpassed MyGolfSpy’s 50,000 center-strike tests of other drivers.

How did Knuth achieve this eye-opening (and smile-inducing) increase in power? By taking the USGA’s recent changes to the “CT” rule — the amount of time a ball can stay on the face of a club, from 257 to 275 microseconds, sometimes called the trampoline effect — and pushed those numbers toward the High Heat’s perimeter, to an average of 267 on the toe and 266 on the heel. That’s why Knuth has dubbed High Heat’s full-hot-face effect “257+ Technology.”

Why is this breakthrough important? First, consider that the width of the center impact area is the just 1.68 inches — the diameter of a golf ball — so the large toe and heel areas are less than an inch from the middle of the face. The narrow width of the center impact area —plus the average amateur’s swing, set up and grip pressure flaws — are why they hit in the toe and heel on about half their drives, according to Kay McMahon,  LPGA Hall of Fame teacher. Historically, the much  lower CT in the toe and heel areas compared to a higher CT in the middle of the face, plus the loss of ball speed on toe and heel hits due to twisting of the club at impact, is why amateur golfers lose on average between 20-30 yards or more on their tee shorts and 15-30 or more yards on their metal wood approach shots.

Combined with a low and deep center of gravity (CG), the High Heat is fashioned expressly and confidently for these amateur golfers, especially those lamenting the loss of distance that has crept into their games as the decades stack up and physical limitations set in.

Take a certain 57-year-old Golf Tips editor, for instance. When he got his hands on a sample High Heat driver — 10.5 degrees with a new, upgraded Fujikura Pro 2.0 R-5 shaft and a Lamkin grip — he headed straight to a local practice range and gave the club a go. No Trackman, no measuring device of any kind, just feel and eyeball data.

After some warm-up with other sticks, out came the High Heat driver, and the very first strike told the tale loud and clear (emphasis on loud): What felt like a slight toe hit resulted in a powerful mini-fade that rolled out nearly to the range’s border fence some 280 yards distant. Another shot, this time pretty much on center, was even more impressive in impact explosion, ball flight height and carry distance.

The testing continued with one big fly after another. Even definite heel shots, which usually result in weak fades or slices for this golfer, stayed on line — on a string with, again, solid carry and roll-out distance. With the High Heat driver, strikes that were once disappointing are now exhilarating, time after time.

And the High Heat’s distinctive sound? Loud, yes, and more ringing than thumping. It immediately caught the attention of a guy at the next range station. “That’s an interesting sound” he said, watching one pounded drive after another.

“Give it a try,” said the tester. So he did, and quickly came the mini-review. “Wow, it does really travel.”