So, this Bridgestone outfit, they’re the golf ball folks, right? The new ones Tiger put into play last year? Well, yeah, and darned fine golf balls they are, especially the Tour B RX. But this venerable company is no slouch in the golf club department, either. In fact, the next generation of Bridgestone Tour B JGR club series — driver, fairway metals, hybrids and either the graphite-shafted, wide-soled HF1 game improvement irons and steel-shafted, low-to-mid-handicapper HF2 irons — impressed me at every level over several testing rounds in advance of their Sept. 12 debut.

As you’d expect, the Tour B JGR line is, of course, designed with the everyday, average, aspiring amateur in mind, though they’re getting some love from Bridgestone Golf staff players Matt Kuchar and Brandt Snedeker, who replaced their former drivers with the new Tour B JGR model earlier this summer. But what really blew me away were the irons, in both configurations, on an array of courses from mountainous to muni-flat, turf from tight to fluffy. After packing the same irons in my bag for a decade or more, I was prepared for some improvements in technology, and got it … and then some.

Let’s start with the driver, then roll right through the bag to the wedges. 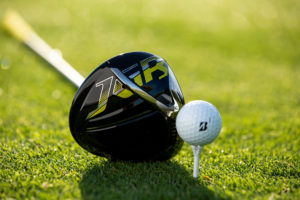 Though it probably won’t garner the notice of the “big boys” in the driver sector, Bridgestone’s new Tour B JGR driver deserves a hard look from anybody who’d love to put a few extra yards back into their tee box quivers, at a reasonable $399 retail price point. Just get a load a load of its draw bias construction, its “Power Mill Face” finish that reduces spin and stabilizes the ball at impact to max out compression time, and its “Boost Wave Crown” with external and external channels that help increase launch angle and ball speed. All conspire to produce explosive flight and control; even when I came over the top with my 9.5-degree model (it’s also available in 10.5 and 11.5 degrees) and pulled a tee shot with a slight toe strike, the ball took off on a dead, penetrating sprint and somehow didn’t go further left, attesting to the face’s stability at impact. In fact when I finally caught up to it, some 275 yards down the fairway, it was still on short grass. The clubhead offers a deep and surprisingly “compact” and classic look at address, with noticeable but not extreme bulge and roll. Its lightweight head allows a smooth takeaway and subtle, unforced set at the top, which facilitates a simple slot move into the ball, and the stock UST Mamiya Recoil 460 ES shaft (I tried the R flex) is responsive with a good load profile. In short, this beast is a pleasure to swing. 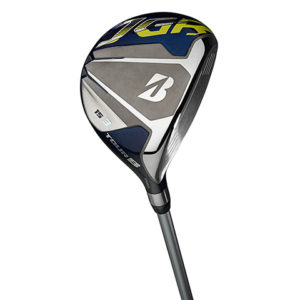 I’ve long had a love-hate relationship with my “utility” clubs. Seems I can’t help but fight them in terms of set-up and approach — do I treat them more like an iron or a wood? 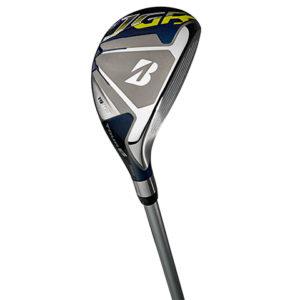 The three new Tour B JGR metals Bridgestone sent me — 15-degree 3-wood and 18-degree 5-wood ($229 each) and 22-degree hybrid ($219 each along with a 25-degree model) offered the same slitted crown as the driver, along with a variable-thickness face to promote better distance on off-center strikes — and helped make my  personal head game moot: They begged to be swung more like an iron, inviting me to ease into the posture of, say, a 5 or 6 — hands relatively close to the body, slightly more bend at the waist, slightly narrower stance, with the upright backswing such address angles naturally produce. That allowed me to simply get out of the way and let these black beauties do their effortless thing. Suddenly those forced cold-tops and fats were a thing of the distant past and I welled up with confidence every time I was faced with a 195- to 230-yard shot … or a lay-up tee shot, which each stick pulls off to sky-piercing perfection. One shot in particular comes to mind: A 210-yard approach on the par-5 16th at The Colorado Club outside Denver. I pulled the 22-degree, settled in, smoothly pulled the club back and just let the half-moon-shaped head fall back into the ball with no extra force. The resulting dead-straight shot landed perhaps a yard left of where I aimed it, still hole high after a soft landing. I get the same lovely result and feedback from the other two clubs; only the most off-kilter move results in the dead pull-hook I’m used to with this category of stick — usually I’m looking at sweet, slight draw (anything more than a baby fade is next to impossible). Now I can safely boot the “hate” part from the whole love-hate thing. 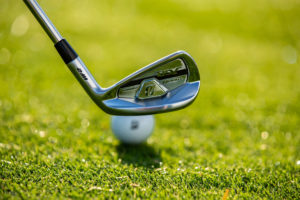 Both new JGR iron sets are also packed with innovation, combining the soft and consistent feel of classic forging with established but ever-improving modern advancements like thin, high-flex faces and cavity backs that range from near-hybrid-deep in the HF1 to shallower, can’t-see-’em-at-address shallow in the HF2.

The latter model’s ultra-thin face promotes exceptional distance, while the heads include a rubber polymer insert to enhance feel, reduce vibration, and ensure crisp sound at impact. As a 10-handicapper experiencing alarming age-driven distance loss through the bag, I found the HF2 a pure gift from the golf gods, even with the somewhat TrueTemper XP 95 shaft on board. I consistently got 5 to 8 yards more out of each club compared to my old irons (160 yards with a 7-iron, for instance, compared to the average 152 I’d become accustomed to), with pleasingly and consistently soft and responsive feedback at impact. I could feel my bugaboo toe strikes immediately, yet marveled as the ball still traveled close to the distance I’d asked of it. The spin these babies produce is something to behold, even on hard greens; pulling the string like Philly Mick is doable again. And, with the hybrids, I simply couldn’t produce a slice with them. That put pure confidence back into the equation, meaning less stress, meaning many, many more smooth passes, more greens in regulation and more short-range putts for par or better. 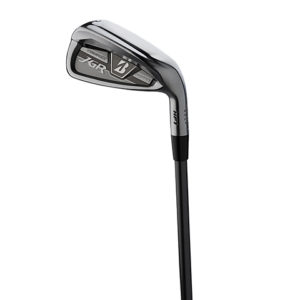 For higher handicap players, the HF1 irons feature a thick, hollow cavity design — essentially a hybrid that provides easy launching distance in an extremely low COG forged head (you won’t believe the moon shots these clubs will pull off). The same variable face thickness of the HF2s provides responsive feedback on hits across the face. The standard UST Mamiya Recoil graphite shafts just add to the soft feel at impact and give slower-speed swingers the extra oomph they need to keep up with their lower-handicap buddies.

One thing to remember about the HF1: Bridgestone has taken the modern tendency to pump up “standard” lofts to very generous levels, and gone close to an extreme. While it’s an obvious confidence boost, this practice takes some getting used to — the 5-iron is really a standard 4-iron (almost a 3-iron, really), the 9-iron is an 8-and-a-half-iron and the pitching wedges are split into “P1” and “P2” versions with lofts of 38 and 44 degrees (rather than the old school 46 or 47). Even after making note of your new prodigious distances on the range, it could take a few holes of real combat to make the mental and strategic adjustments, lest you’ll find yourself airmailing many a green. But they are an absolutely joy to swing, especially for players prone to a big curve in either direction. They tend to guard against the extreme hook or slice thanks to serious stability at impact and smooth and shock-free response from the graphite shaft.

My biggest challenge moving forward? Which iron set to put in my bag on a more permanent basis. The older, slower swinger I’ve become pushes me toward the more forgiving H1, but so far I find the H2s are treating me just fine, thank you very much. It’s a great problem to have — and a welcome throwdown from a Bridgestone bunch who has clearly had a ball building these clubs.