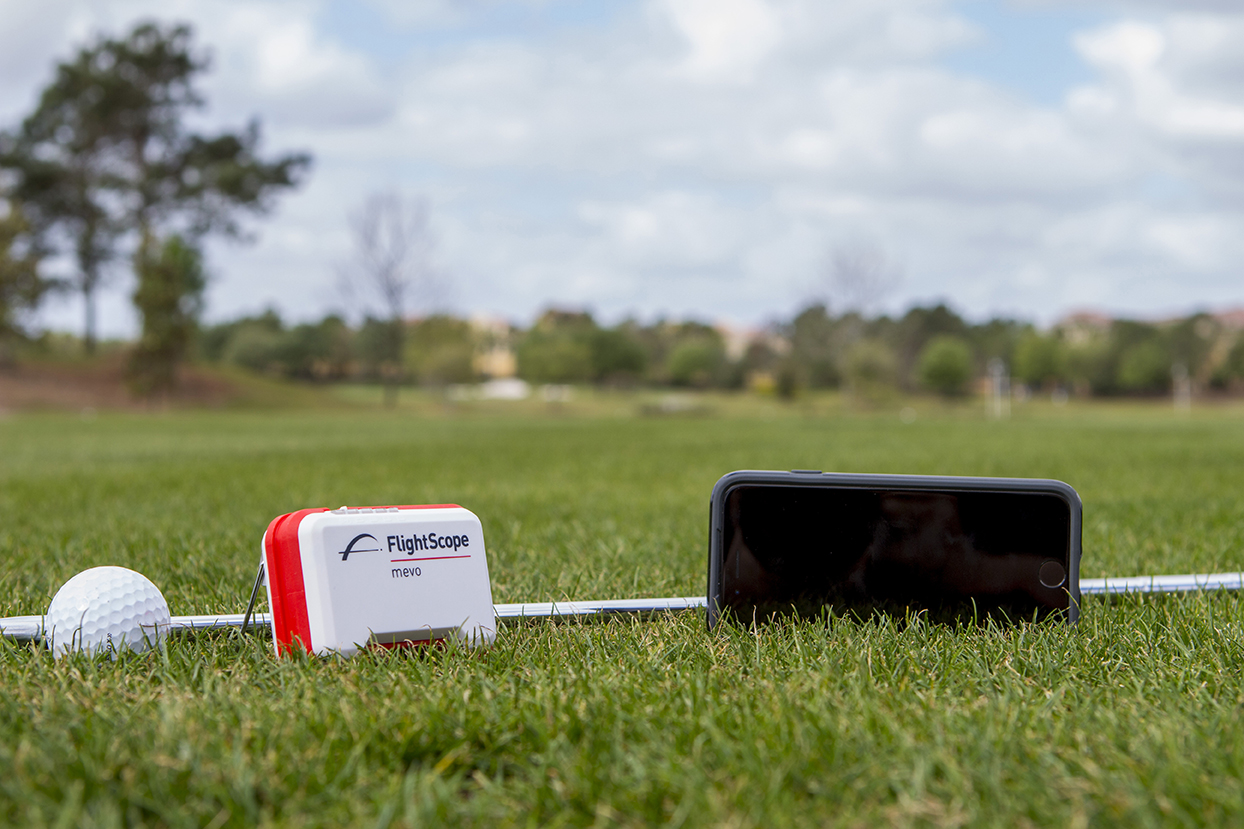 Never thought I’d utter these words, but here goes: It’s time to give your golf game over to the little silver dot. You heard that right: It’s time to embrace the tiny, reflective, circular sticker at the heart of the FlightScope mevo personal launch monitor, because when applied to a golf ball, placed on the ground or tee facing the target, several feet away from the little red and white gadget itself, and launched out onto the range or fairway with whatever club is in your hand, it works numerical mini-miracles, instantly, thanks to Doppler radar.

Though I’m nowhere near a Luddite — I love my (now three-year-old) iPhone and adore my new Series 4 AppleWatch — in terms of golf practice and learning I tend to lean on old-school feel and physical swing tinkering rather than subscribe to the tyranny of cold, hard numbers. So when a product like FlightScope mevo comes along with the promise of making every all-too-rare practice session more enlightening and efficient by showing me point blank what key numbers each swing produces, I’m sometimes daunted by the set-up process and wary of the results. After all, after 45-odd years of playing golf I know what I’m feeling inside, what tendencies I’m resigned to go with on any given day.

But mevo, like so much techno-wizardry these days, is a revelation, mostly for its ability to show variations in ball striking, swing speed, spin rate, smash factor and more in real time, with no questions asked and very few loopholes left for my doubts to dive through.

A global high-tech company and industry leader in the development and manufacturing of sports technology, FlightScope’s stated mission is to enhance every athlete’s performance through its various 3D Doppler-driven products — through a portable and affordable launch monitor in mevo’s case. Its bigger, more powerful and more expensive siblings are employed by teaching pros the world over, not only in the golf realm but in baseball, tennis, discus throwing — virtually any athletic pursuit that involves an object flying through space.

But golf is where FlightScope really shines. Mevo, which is an acronym for Measure, Evaluate, Visualize and Optimize, was introduced a few years ago but keeps getting better thanks to tweaks to the unit itself, firmware updates, and the iPhone or Android app that communicates with it via Bluetooth and turns all those silver dot-generated Doppler waves into numbers displayed instantly on screen. If you really want to get fancy, you can shoot video at the same time, then match each swing up with its unique data — the “Visualize” part of the equation, which leads to the “Optimize” kicker: Clipping the videos to their essence and storing them in your personal account on the FlightScope cloud, and even sharing them with your instructor or in game-improvement competition with friends. Bust a record drive or attain a clubhead speed previously thought impossible? Send the telltale figures to the company and they’ll proudly post them on their website and social media.

I didn’t go the video route during my testing session at a local range, finding mevo’s straightforward measurements more than enough to command my attention. Once I got my phone and mevo talking to each other and established my online account, I set up the machine for the right measurement conditions, including whether I was practicing indoors or out, how far I’d place the unit from the ball (it’s best from 5 to 8 feet), local elevation above sea level, my age, measurement mode (Imperial or Metric) and a few other details. Then it was time to start my first session, which defaults to the current day and time though you can name it anything you want — Hackfest Three, Masters Warmup Five or whatever.

There are two ways to tackle the application of those little silver dots — one at a time, as I did, or a sheet’s worth in advance; once you run out, you can order more online. You just need to make sure that with each swing, the dot is facing toward the target, which allows mevo to pick up its movements from impact until it lands (as far as I can tell, it won’t pick up “total” or roll-out distance). And one word of advice: If you live or are traveling to warm climates, don’t leave the dots in your golf bag — they have a tendency to melt together, making it tough to pry them apart and put them into service.

Once you’re ready to start recording swings, make sure the club you’re using matches the one selected on the app; I asked mevo to measure my moves with a 54-degree wedge, pitching wedge, 8-iron, 6-iron, 4-hybrid, 3-wood and driver, setting the app to give a “ready” sign with its Siri-like voice, then utter total carry distance with each swing. On the screen, clearly readable from several feet away, were the raw numbers — head speed, ball speed, smash factor, vertical launch angle, spin, height and flight time. I could have added flight time and highest point of ball flight as well, or displayed the numbers in different configurations.

Through the dozens of recorded swings, I could quickly equate what I felt with what the digits on the screen told me. Those rare flush, well-timed strikes translated into more distance, less spin and more efficient trajectory; and, as you’d expect, the familiar toe-jobs or fats or flips meant much weaker figures. The biggest takeaway, at least for me, was that after several swings with each club, I could dial in my average carry distance for all of them, which, of course, should lead to less club selection guesswork during actual round on the course. The distance shown on a cart’s GPS or through my rangefinder will actually benefit me now, if I don’t let ego get in the way.

Which brings up another mevo absolute: Numbers don’t lie. Nor can I lie to myself any longer: mevo demands that I practice more, and more intelligently — and trust what it, and those little silver dots, tell me.

The mevo retails for $499 and monthly payments as low as $44 are available through the company’s site as well. The  mevo mobile app, customer support,  firmware upgrades, USB charging cable and carry case are included.