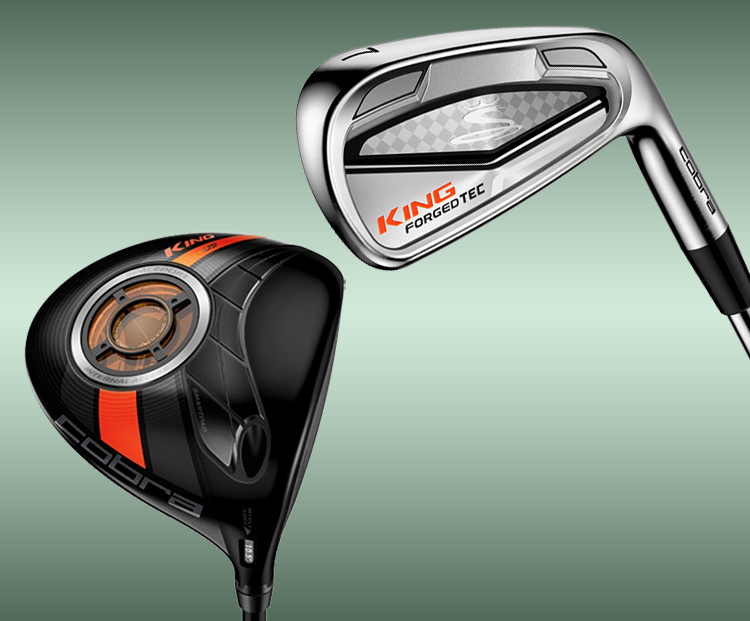 “There is a look better players like,” says Cobra head of research and development, Mike Yagley, “or it just doesn’t go in the bag.” He’s talking, of course, about Cobra’s flagship player, Rickie Fowler, for whom the King LTD was originally designed. It came out so well the company developed it for the general better-stick market. They’re calling it their fi rst “zero CG driver” and “the ultimate distance machine” thanks to forward-thinking design inside and out. “It’s a little more compact, like our F6 driver, but the best we could do was fi nd as much discretionary mass as possible.” The club’s carbon fi ber crown is 20 percent lighter. The titanium is all 811, also lighter. The face is “thicker where it needs to be and thinner where it can be.” The idea behind it all is to reduce the center of gravity to as close to “zero axis” as possible, which allows more effi cient impact in the head vertically and horizontally — and more distance. The driver also has the highest possible moment of inertia thanks to a 14 gram weight low and back and a space port, at 16 grams, also low and back. But the coolest thing is via the port, you can see right into the guts of the club. Finally, the LTD’s “My Fly” system lets you adjust the loft from 9 to 12 degrees without drastically changing the fact angle. Visually it’s a stunner, and thanks to all the technology, says Yagley, “you don’t have to think about anything else” but taking dead aim and letting fl y. The King LTD Pro is available in fi ve lofts — 7 to 10 degrees — while the LTD is available in lofts from 9 to 12 degrees. Both also have various fade and draw settings. The new LTD family also includes fairway metals and hybrids. $449 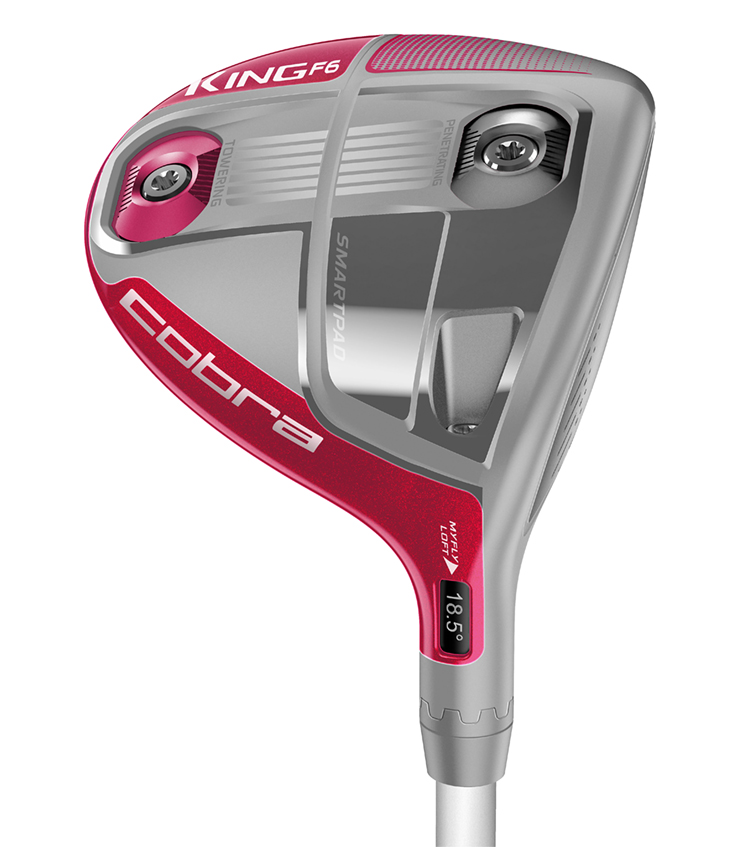 While the King LTD driver is the biggest news among Cobra’s bigstick array this year, the King F6+ and F6 family of products is making waves of its own, especially in the metalwoods and hybrids categories. Each club, like the F6 driver, features two CG positions and 20-gram and 3-gram moveable weights. 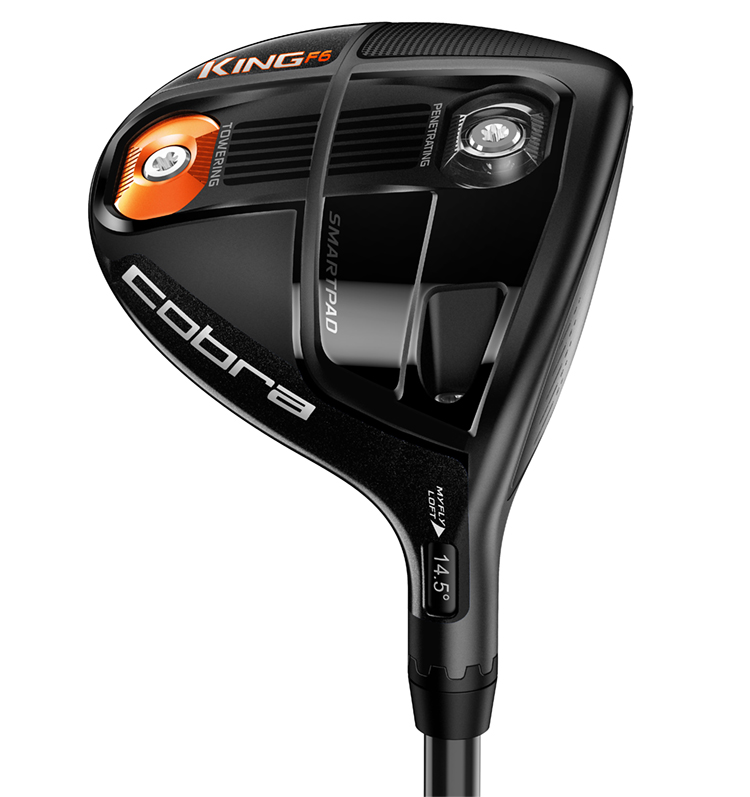 Additionally, to maximize distance and ball speed, engineers used a 475 SS face insert combined with Cobra’s Speed Channel Technology. MyFly8 combined with SmartPad delivers eight loft positions to fi ne-tune your long game. Rounding out the metalwood collection are the King F6 Hybrids. Each club (2-3H, 3-4H and 4-5H) in RH/LH features a fi xed 13-gram back CG weight to deliver high MOI and a more center CG for both forgiveness and precision shot after shot. The new head shape is three grams lighter than previous models and touts a thin 455 SS face along with Speed Channel technology for maximum ball speed. The entire King F6 line, including driver, is available in women’s versions; they are fi ne tuned to maximize launch and distance for women who generally have slower swing speeds and need slightly shorter lengths and lighter swing weights. $199-$239 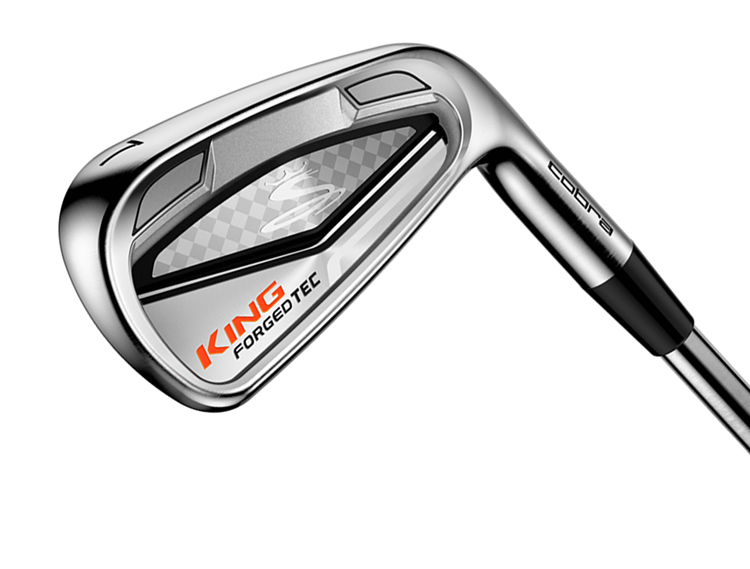 Cobra rolled out two new King iron models this year — forged and forced TEC (enchanced cavity). Designed for the low-handicap golfer, KING Forged Irons are engineered for superior feel and control with unprecedented accuracy and precision. They feature a five-step forging process that yields a more precise shape, developed with feedback fromRickie Fowler, a more aligned grained structure and tighter weight tolerance. The result is the best feeling, best looking irons that elite golfers demand. A co-forged tungsten toe weight positions the Center of Gravity (CG) directly behind the hitting zone in the center of the face delivering precision shot making. Computer Numerically Controlled (CNC) Milled Faces and Grooves deliver maximum spin and trajectory control. The Forged Combo set (cavity back mid & long irons plus muscle back short irons & wedges) comes in a Diamonized Black Metal Finish (DMB) around a Forged 1025 Carbon Steel Body. A full set of muscle-back irons are also available. The KING Forged Tec (Technology Enhanced Cavity) Irons, created for the mid-handicap golfer, provide the feel and precision of a tour iron with maximum forgiveness and distance. This multi-material construction iron features the same five-step forging technology a found in other Cobra Forged irons along with a new J15 high strength steel forged face insert material to enhance distance and save weight. The remarkable feel comes from the harmonic cavity insert which is an engineered Thermoplastic Urethane (TPU) Insert, positioned directly behind the impact zone, between the face and the back cavity, for vibration damping and improved feel at impact. Combine this with tungsten heel-toe weighting for forgiveness, and precisely centered CG and the KING Forged Tec irons are true game-changers. $1,099-$1,199 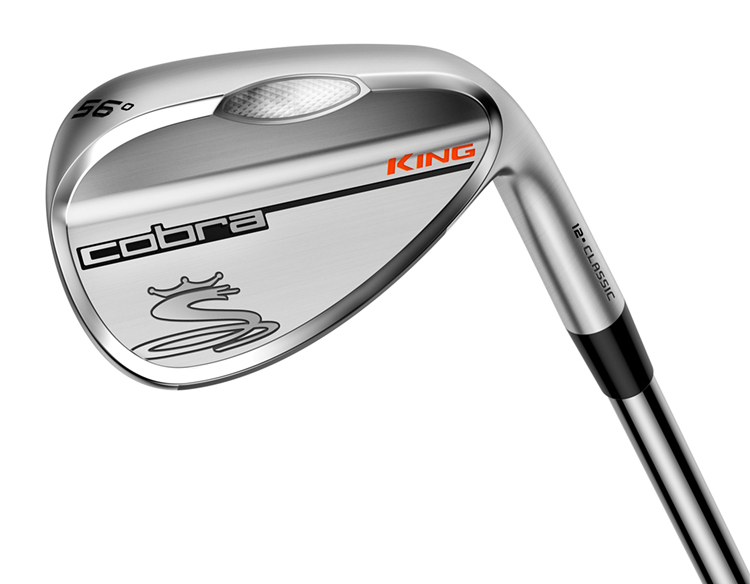