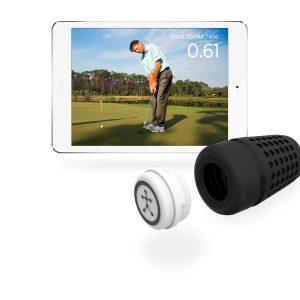 By now most golfers are familiar with all types of game-tracking gizmos that rely on a Bluetooth connection between a club-mounted transmitter — most of them screw into the small hole on the end of a club’s grip — and a smart phone or tablet app. Blast Motion Golf 360 is part of that family, consist-ing of a small, round device that attaches quickly to whatever club you’re swinging, but that’s where its similarity to most other products ends.

Sure, it’ll measure bedrock stuff like face angle, loft and lie, rotation — nine metrics altogether that offer an almost instantaneous picture of where you’re motion is, and where it needs to go. But in one area in particular — tempo — it’s far and away the coolest such gadget we’ve seen. Bill Andrews, a teaching pro and occasional competitive golfer from Connecticut, agrees whole-heartedly. In fact, he’s such a Blast Motion believer that he volunteered to help the company explain and demo the product to teaching pros at the PGA Show. A small putting surface and a mounted iPad is all he needed to make his point as one golfer after another gave it a shot to see how close their putting stroke came to a numerical ideal that the Blast Motion developers and discovered after deep and revealing research. “I’ve been using it for a year,” he told Golf Tips.

“It’s for putting, chipping or full swing.” In the data-base they have one and a half million putting strokes of Tour players, and what they’ve gathered from their input is that the backstroke time is twice as long as the through-stroke. I’ve been out to their lab in Cali-fornia. They’re MIT guys, a bit ‘out there,’ but they’ve done some great work. “Think of this: You’ve played with a guy who just buried a really good putt and you’ve said, ‘that’s a great stroke.’ So what makes it great? Well, a putting stroke takes .9 seconds, a full swing a full second. That’s no mystery. But the perfect stroke is always .6 to .3 seconds, backstroke to forward stroke.” In other words, no matter how long the putt or the stroke to match it, the perfect rhythm of a pro-level stroke is always .3 seconds or a multiple of it going back, .6 or a multiple going forward and through. And Blast Motion will show whether you’re in the ballpark in just one stroke.

“It’s so simple to use,” Andrews said, adding that the “Blast Connect” cloud-based platform turns the product into a long-distance teaching aid. “The sensor is good for eight hours, it attaches to the end of the putter. You open the Golf Blast app, it comes up and recognizes the sensor. You can click on the camera and film the swing, and all the met-rics are right there with the swing. Someone can video their stroke, send it to me and I can work with them from 1,500 miles away.” It works for pitching, chipping and full swing, too. Andrews is such an adherent that he sells them to his fellow pros and many students, and many other teachers get into the reselling program, too. “This thing is [less than] $200; pros can pay for it the first lesson they do, because most likely the guy who’s taking the lesson is going to buy one, and you’ll make 50 bucks.” So, Blast Motion sells itself, but the proof is in the feedback Andrews con-tinues to get on his own stroke. “I hit a lot of balls, I play pretty well, so I might not need it as much as a lot of amateurs, but where it really helps me is with pitching and chipping, that motion,” he said. “For most players, it’sm best for putting. I don’t know anyone who doesn’t want to putt better. I knew I had to hit 16 or 17 greens to shoot in the 60s because I didn’t know what I was doing on the green. Now I spend more time on the putting green, and it’s showing.”
$149 | www.blastmotion.com