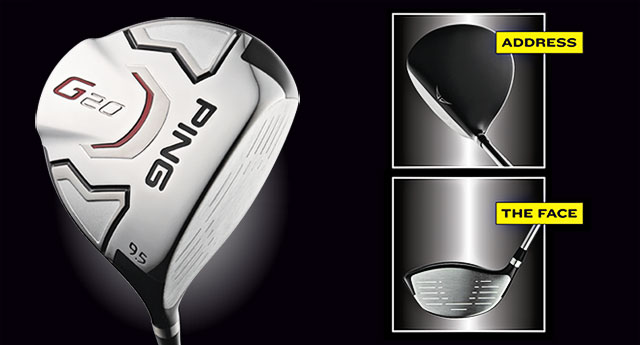 Without question, PING is considered a pioneering force in golf-equipment design. Known initially for putters, the company revolutionized the way the game was played with its introduction of the game’s most playable iron type: the cast cavity-back iron.

Today, the legacy of Karsten Solheim continues, with not only new putter and iron innovations, but also an equally dedicated approach to how the company develops new drivers, fairway woods and hybrid clubs.

INITIAL RESPONSE:
Not only does the new G20 driver feel light (despite a head weight around 7 grams heavier than the G15), but the paint job is a few shades lighter with a silvery gray finish that does a great job at absorbing glare and reflections. We tested this driver with a 45.75-inch shaft, making this driver feel as though it was designed to swing fast. Couple that with the elongated clubface, and you couldn’t have a more confidence-inspiring look at address.

PERFORMANCE:
Here at Golf Tips, we purposefully use "real-world" testing without robotic data and such, all in an effort to give you a real hands-on review of what we try. In the case of the G20 driver, we found that like Ping’s earlier game-improvement driver, the G15, the G20 is primed for extreme distance and forgiveness. Using an external weight system (with much of it applied low and away from the clubface), the G20 produces a high ballflight–so high that even we were surprised with the height the ball soared. Nevertheless, that’s not a bad thing, since the driver also produces a relatively low spin rate (which frankly, is contingent on how one swings the club). Shots hit on the toe and heel favored well, with minimal loss of distance and control. Despite the G20 being long and straight, we actually found the club to present itself as a viable anti-slice driver, since most of our drives produced a high, right-to-left trajectory. In other words, we couldn’t slice it, which also meant we struggled to "work" the golf ball and hit fades or even lower tee shots. Instead, we had to accept hitting high, drawing bombs all the time”pity for us, eh?

EVALUATION:
A great driver, especially for moderate swing speeds and for golfers who want arguably, the most forgiving and longest driver PING has ever made. Better players however, may find the G20 to produce too much draw bias and too high a trajectory, but again, with such consistency and power, being unable to maneuver the ball is a moot detail considering how powerful this driver actually is. Maybe next time we’ll try the Tour shaft.

INITIAL RESPONSE:
Sporting the same looks of the driver, the G20 fairway wood has a handsome, understated appeal. The stainless-steel, 165cc head, which, hard to believe, is bigger than some of the first iterations of metal drivers, has a smooth, convex crown that makes you feel as though the shaft and neck of the clubhead reach the ground. This creates a great feel at address that’s also visually easy to look at.

PERFORMANCE:
The G20’s shallow, low-profile clubface produced high, although not as high as we expected, shots that flew straight as an arrow. Shots hit off the heel and toe didn’t fly quite as straight and far, but were still manageable. The most telling characteristic of the G20 fairway wood was, again, the propensity for the club to produce right-to-left ballflights. Maybe it was just us that day, but most of our shots flew with a draw. In the ideal situation, we like to hit fairway woods straight or with a little fade, since fades fly higher and land softer, but for the average golfer or even the chronic slicer, these fairway woods are ideal.

EVALUATION:
How the G20 fairway woods perform rests heavily in the right shaft selection. Stock options include a high- or low-launch PING TFC 169F graphite shaft, meaning, in our case, we might have been better off using a higher-launch shaft to get the ball higher and land softer. However, with the right shaft, we suspect the G20 fairway wood will perform exceptionally from both the fairway and off the tee.

INITIAL RESPONSE:
This hybrid is clearly designed as a long-iron replacement with an iron face design and a wide, cambered sole. You’ll notice immediately the offset hosel (more on that in a minute), and at address, some acute golfers may notice the slightly flatter lie angle.

PERFORMANCE:
The G20 Hybrid’s stout dimensions and offset hosel took a little getting used to at first. And much to our surprise, the offset hosel did less for slice correcting than it did for helping the ball get airborne in a hurry. Shots hit with this club fly high and with added spin, making it easier than ever to play long-iron–err, hybrid–shots from the dreaded 180- to 210-yard range. We also found the deeper-face iron design to make more sense in the rough–some other hybrids, in our opinion, are too shallow, making it difficult to hit solid shots from the thick stuff.

EVALUATION:
The G20 Hybrid is a top hybrid performer, as long as you don’t mind the iron shape and offset hosel. If you can get past those variables, you’ll make a very smart buying decision.