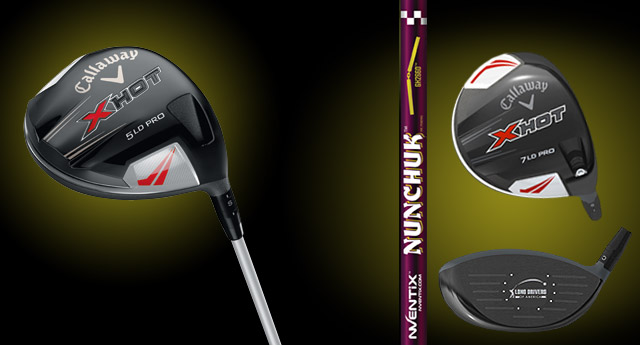 In case you haven’t paid much attention to long drive competitions, here’s what you’ve been missing. Last year’s RE/MAX World Long Drive Championship included a handful of bombs that flew more than 385 yards into a 20 mph headwind. Impressive, huh? Imagine how far they would have flown with no wind. Callaway Golf, known for producing some long drivers in their own right, has taken special notice of long drivers this year and has codeveloped a new driver with Sellinger’s Power Golf that’s destined not only for long drive competitions, but the hands of would-be competitors who have big dreams of hitting it big. How do I know? I tested the Callaway XHot Pro LD ($279) driver myself, and here’s how it went down.

THE SETUP
First, ordering the Pro LD is simple. Log in to longdrivers.com, and you’ll see it’s easy to pick the right head for your game. By head, I mean the club can be bought without a shaft (although you can get one already assembled, if you want). Reason being, long drive competitors tend to be a fickle bunch when it comes to shafts, and Sellinger’s Power Golf wanted to make sure each customer has full control over what shafts they put into this Callaway head. Other than the lower loft, the Pro LD has the same tech specs as the regular Callaway XHot–a Speed Frame chassis, Hyperbolic Face and two versions of an adjustable hosel. I chose the 7-degree model (5- and 6-degree models are also available) with the dual COG adjustable hosel, meaning I could choose from nine face angle/loft configurations over the three options that come from a single COG hosel. And while most long drive competitors use shafts designed specifically for long-drive competition (that are as stiff and long as telephone poles), I went with a more suitable shaft for my swing speed. I choose the nVentix NUNCHUK with its unique, uniflex, heavier-than-normal properties. I kept it at 46 inches so I could emulate a long driver as much as I could. I also put the new Winn DuraTech grip on there. Not to elaborate on the grip too much, but it felt awesome. Enough said.

PLAYING TEST
The NUNCHUK, in my opinion, is a pretty strong shaft to begin with. Jhonattan Vegas uses it on the PGA Tour, and he isn’t exactly a soft swinger. At 46 inches with a 7-degree clubhead, I have to be honest, I was a little intimidated. Knowing I had an adjustable hosel helped a little, but the added length and low loft made me feel as though I had to swing a little harder to make the club work for me. The charcoal finish actually looks really cool with the purple shaft, and I liked the clean, no-nonsense, modern shaping of the clubhead. I wished the head had a small alignment dot or something, so I could assure myself of a setup that placed the ball directly in front of the sweet spot.

While testing the driver, I made a point to do two things. I wanted to swing the driver as I do normally using my normal swing speed and tempo, and then again as though I was trying my best to mimic a professional long driver.

With my natural swing, I immediately recognized the added 1.5 inches in extra shaft length, as my first few drives flew hard right and a little low. I even hit the ground a few times before striking the ball. After a small adjustment in my stance and ball position, I was quite surprised at not only the heap of forgiveness the Pro LD has over other long drive drivers I’ve tried, but how high I was hitting the ball. I fully expected the 7-degree loft to fire line drives, but I was actually hitting tee balls that flew with a moderate-to-low trajectory, not with a low-to-wormburn trajectory as I had expected. Understandably, trajectory isn’t solely derived from the loft of the head–shaft flex and length also play a part in how the ball flies. Nevertheless, the ball flew with a trajectory I was happy–and surprised–with. The longer shaft instinctively forced me to put the ball more forward in my stance and tee it a little higher. That helped get the ball higher, too.

I know what you’re thinking, though. Nobody cares how high it went; this is a long driver club. How far did my drives go? Measurably, my hits with the Pro LD flew at comparable distances to what my regular driver produces (drives that carry around 275 to 280 yards), but the slightly lower trajectory meant some extra forward roll, so I’d contend that I hit the ball about five to 10 yards farther than I usually do. That’s pretty good, considering I’m particular about my go-to driver and I’ve had it tweaked for maximum distance. Shots fired off the heel and toe, however, didn’t fair quite as well as I’m used to, as shots flew lower and more offline the more I missed from side to side. But, on the occasion I hit it solidly, I hit some serious bombs down the fairway.

Let me be clear, though: The Pro LD definitely produced some long drives, and it’s not that it wasn’t forgiving. It’s forgiving compared to other long drive drivers. But compared to my driver, it’s clear that it’s a driver for pure power and not power/forgiveness like my usual driver is billed as.

That said, it wouldn’t be a conclusive test if I didn’t try to ratchet up my swing speed (which, ahem, is already more than 105 mph) and see what happens. At first, I made some wild swings and realized that there was a limit to how hard I could swing and how hard I should swing. (They’re not always the same swing, by the way.) So, even though I swung harder and faster than normal, I still had to scale back so I could–you know–actually make contact with the golf ball.

What happened was quite interesting. It seemed the faster I swung, the farther the ball went. Duh, right? That may seem obvious, but for me, what happened is rarely the case. Typically, the harder or faster I swing a driver, the more backspin I generate, which actually shortens my overall distance. This club, on the other hand, showed little to no difference in trajectory when I swung really hard. And, I took a few real pops at it, expsecting either to balloon the ball or drive it into the ground, and the results were so long and consistent, I actually felt like a long drive competitor for a moment. The results were astonishingly better than when I swung excessively hard with my normal driver, both in terms of distance and, surprisingly, accuracy. I didn’t have a Trackman on the course, but I did hit a handful of tee shots, and my solid shots with the Pro LD were easily 10 to 15 yards longer than my good ones with my standard driver, that is, when I swung with some extra oomph. When I missed the sweet spot, I lost out on some distance and control, but that was excusable in my book. After all, my weaker-shafted normal driver was wilder than the Pro LD when I tried to really nuke it. And, like I’ve said already, even though the Pro LD has some forgiveness built in to its DNA, this driver isn’t supposed to be easy to hit. It’s meant to be long and nothing else.

THE CONCLUSION
The Pro LD is just the driver for those of you who want to swing hard. Really hard. It’s also important to recognize that although this driver is designed for golfers who want maximum distance, it’s not a driver for golfers who actually need more distance. You have to be able to swing fast to be able to take advantage of what this driver can do. The adjustable hosel didn’t seem all that necessary to me, but it’s probably useful for actual LDA competitors who need to adjust loft/face angle for varying wind conditions. Solid shots had a penetrating trajectory that soared a long way and rolled out more than I’m used to. Also, the nVentix NUNCHUK shaft, which isn’t technically a long drive shaft, performed exceptionally well. Its heavier, uniflex design made it easier for me to feel the driver better as I loaded up and coiled on the backswing. Had it been too light, I might have had a harder time knowing my limits with my swing.

Does the driver deliver? It certainly does, making it one of the best long drive drivers I’ve ever tried (and, yes, I’ve hit a whole bunch of them). For a longer hitter, it’s not a bad option for regular golf-playing as well, since it has more forgiveness than most long drive drivers have. If you have a swing speed below 105 mph, you may want to stick with the regular Callaway XHot driver. But, if you’re already long and want to be insanely long, don’t overlook the monstrous XHot Pro LD.

2 thoughts on “We Tried It: Callaway XHot Driver”