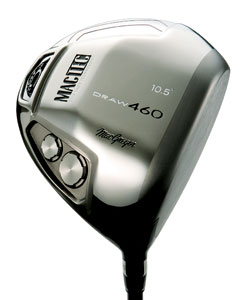 MacGregor Golf is one of the oldest and most storied golf club manufacturers in the world. Over the years, the company has been closely associated with many of the game’s all-time greats, including Jack Nicklaus, who won numerous major championships using MacGregor VIP irons and persimmon woods. Over the years, MacGregor has changed hands on several occasions and produced a wide variety of clubs with varying degrees of success. Most recently, MacGregor Golf has enjoyed an impressive resurgence due to a passionate owner, the development of innovative, high-tech products and the signing of a number of notable Tour pros, including Greg Norman, Jose Maria Olaz”_bal, Steve Elkington and Aaron Baddeley. And since Norman now owns part of the company, it’s a safe bet that MacGregor products will continue to provide extremely high-quality performance for years to come.

NVG2 Draw Driver
The design of this 460cc monster utilizes tungsten sole inserts to provide enhanced stability through impact and increased control on mis-hits. 360-degree Cup Face Technology is combined with TVC beta titanium to widen the sweet spot up and down the clubface, maximizing ballspeed regardless of where the golf ball is contacted. Thin Crown Technology effectively lowers the CG of the NVG2 Draw Driver, helping to produce an

optimal trajectory and low-spin rate. A slightly closed clubface and heel-biased weighting promote a right-to-left shot shape, even for players who suffer from chronic slicing.

control. A relatively compact head size makes the NVG2 Hybrid Utility playable for a wide range of golfers. Available in lofts of 17-, 20-, 23- and 26-degrees (replaces 2 through 5 irons).

NVG2 Draw Fairway Wood
The same 360-degree Cup Face Technology used in the NVG2 Hybrid is used in the Draw Fairway Wood to widen the sweet spot vertically for better performance all over the clubface. A 450 Maraging Steel clubface and VFT technology function together to maximize rebound effect and, ultimately, overall distance. The clubhead of the Draw Fairway Wood contains two tungsten plugs that are specifically positioned to improve trajectory control, while a Fujikura Triple Action Shaft is made to enhance distance and accuracy.