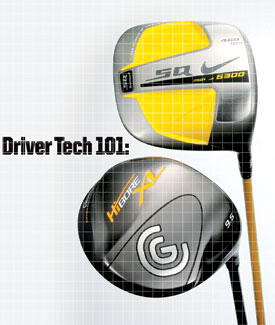 You can tell by looking at the latest square and triangular clubheads that the driver market is changing before your eyes. Other new drivers look conventionally shaped on the outside, but are vastly advanced on the inside. Regardless of their shape, most of the latest models look plain huge. Ever since the United States Golf Association ruled that driver clubheads had to max out at a 460cc clubhead volume, club designers have taken the next obvious route in order to improve their products’ performance in your hands: advancing technology.

And that technology comes in a few different flavors. For starters, you may wonder why the likes of Callaway’s FT-i, Nike’s SasQuatch Sumo2 and Titleist’s 907D1 are shaped so uniquely. Well, their shapes make for a high Moment of Inertia (MOI). Sparing you the technical jargon, this means the clubhead’s dimensions and weighting make the club considerably more stable at impact. And that translates to the ball behaving as if you’ve hit it on the screws, when you don’t. So the ball still gets the most distance and best accuracy it can, even when you miss the sweet spot. The farther you miss it, the more ball speed you lose. If you made contact an inch off-center on an old driver, you’d lose roughly seven to 10 miles per hour of ball speed. Same shot on a higher MOI driver, you’ll lose only six mph, say experts.

“The new head shape allows us to put weights inside the head in places we couldn’t put it previously,” says Dr. Alan Hocknell, Callaway Golf’s Vice President, innovation and advanced design. “Those places are farther away from the center of the head than ever before. The head is more stable than ever. As such, that larger MOI creates a greater off-center ball speed and less shot curvature. Those two things combined lead to longer, straighter shots.”

Think about a figure skater making a pirouette. As she pulls in her arms, she spins faster without apparently adding any energy. That’s because she’s reducing her MOI and pulling her weight inward. To slow down, she swings her arms out wide and creates a higher MOI. That’s essentially what club manufacturers are doing within these odd geometries—stretching weight inside the clubhead as far away from the center as possible. That significantly increases the stability.

“It’s made it more enjoyable for the player who is ability-challenged,” says Hocknell. “And it’s changed the pros’ approach to driving, too. In the past, they tried to shape shots; more often these days, they’re just trying to hit long and straight shots because the equipment is set up for it.”

The rise in MOI is nothing new. In fact, as clubheads have grown significantly size-wise the past few years, MOI has risen dramatically. And that’s resulted in a tighter shot dispersion and longer drives. It’s just that companies now have figured out alternative ways to really boost MOI’s effectiveness. “A lot of driver development over the past few years has been about MOI, but it’s been presented to the consumer as an increase in head size, and bigger is better,” says Hocknell. “We’ve (actually) increased the MOI in the head every time we made it larger. So those increases in MOI have been feigned by people the last few years and have mostly manifested themselves in higher ball speeds from impacts that are not in the center of the face and from shots that have gone generally straighter than they have in the past. So the latest speak about MOI is, in most cases, an evolution. We have to be more explicit talking about MOI now, because the clubhead volume is limited, particularly in the use of more than one material to gain an advantage when you’ve only got a limited volume to play with.” 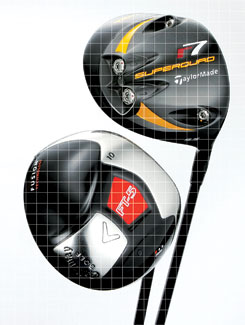 For example, Callaway uses Fusion Technology—a marriage of a titanium alloy cup face, a carbon-composite body and tiny, tin-bismuth alloy weights—to create a larger MOI than you’d get in an all-titanium club. “In real physics terms, MOI has an effect on two things regarding the behavior of the golf ball: It enhances ball speed on an off-center hit and it also affects ball spin, which affects the curvature of the flight,” says Hocknell.

TaylorMade combines high MOI characteristics in its latest r7 Superquad drivers with its Inverted Cone Technology, which is essentially a thicker area CNC-milled into the clubhead’s sweet spot on the underside of the clubface. Together, the two concepts, plus the movable weights, collectively create what the company terms a higher effective MOI, which the company claims is a truer way of comparing drivers because it accounts for the combined benefits of both technologies. “Look at the ball velocity generated from off-center shots,” says Dr. Benoit Vincent, chief technical officer at TaylorMade Golf. “If the face was a constant thickness, it would deliver very little ball velocity.” But if that same driver had the Inverted Cone Technology, it would significantly increase MOI and generate extra ball speed—equating to more distance. Bottom line, says Vincent: “High MOI helps retain ball speed on mis-hits, as does our cone technology. The benefit of both combined is better than either one individually.”

Cobra Golf mills and laser welds a rhombus-shaped ring to the underside of its driver clubfaces for a similar effect. The rhombus is thicker in the center and thinner on the outside, and is angled to help fortify the contact point most golfers make with the ball at impact, according to Todd Colburn, Cobra’s director of global marketing. “It helps golfers get more ball speed,” says Colburn. “We’re focused on keeping the clubface large: The larger the face, the higher the COR across the face and the longer golfers can hit the ball from more of the face.”

There are still other ways companies are helping you get better drives: Several have built draw bias into their drivers, weighting them to help you fight slices and enhance the draw. Many drivers also have shafts specifically developed with the clubhead, to maximize performance and optimize ballflight.

So be open-minded to the latest drivers, regardless of how they look. You never know what form your personal tee box Utopia will take.