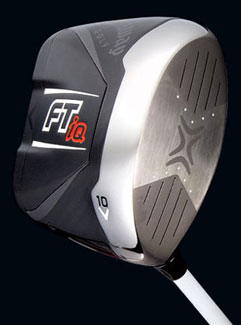 As 2009 has already arrived, it’s time to think about adding some new artillery to your golf bag. If you’re like most players, the driver is the one club you really get excited about, and fortunately, there are a number of innovative and exciting designs available in the new year. If you’re a fan of unique geometric shapes, you’ll want to check out Callaway’s new FTiQ driver, as well as Cleveland’s latest rendition
of the HiBORE, the Monster XLS. Both offer an impressive combination of forgiveness and distance. If more conventional shapes are your thing, be sure to give PING’s Rapture V2 and Titleist’s 909DComp a test run. You’re bound to find a new driver for
your game.

Raise Your IQ
With added curves that more closely resemble the hood of a sports car and a rear side that looks like the tail of a Lamborghini, the performance of the FTiQ is billed as the longest, straightest driver from Callaway to date. The high-MOI, hyperbolic face and lightweight, composite body make the FTiQ the best-looking and best-performing Callaway driver we’ve seen since the Big Bertha, and it’s also the best-sounding as well.

High-MOI Beast
While the original HiBORE had a rather unique look, the new HiBORE Monster XLS has been redesigned to provide an extremely pleasing profile. Along with the new, improved look is a 16-percent bigger face than the previous model, making it even easier to hit. To optimize the club for your swing, the Monster comes in draw, straight and Tour models, with a choice between two Fujikura Fit-on Flight Speed shafts.

Forgiving Titleist
The newest driver line from Titleist has something for everyone, but if you want a driver that
can provide a high launch and plenty of forgiveness, the 909DComp is for you. Featuring an attractive, 460cc pear-shaped clubhead and multi-material design, the 909DComp comes standard with Titleist Matrix Ozik XCON shafts. For players who desire varying trajectories
and spin rates, the 909D2 and 909D3 models are also available.

Rapture In Metal
Following the original Rapture is the new Rapture V2, an all-metal design featuring a titanium head and two tungsten weights located in the lower heel region of the clubhead. This configuration produces the desired high-launch/low-spin ballflight preferred by pros and amateurs alike. The face is elongated from top to bottom, resulting in a more aggressive and deeper face profile. Like all PING clubs, the V2 is customizable._