Once again Titleist gets to the core of the matter with its new NXT Tour, NXT Tour S and Velocity golf balls for 2016 — and the cover of the matter, too. New NXT Tour has been engineered for even longer distance, while new NXT Tour S offers its softest feel yet. New Velocity provides even more powerful distance with a more playable feel. NXT Tour and NXT Tour S, its softer-feeling companion model continue to lead the mid-line ball category with advanced distance and short-game technologies to help golfers shoot lower scores. NXT Tour has a larger center dual core that produces low spin and fast ball speed for even longer driver and iron distance. The new core technology combines with Titleist’s soft, proprietary Fusablend cover for excellent shot stopping control and soft feel. The NXT Tour S provides similar high performance benefits as NXT Tour with a remarkably softer feel. A reformulated softer compression core combines with a softer Fusablend cover to produce the softest-feeling NXT Tour S yet, while maintaining outstanding distance in the long game and commanding scoring performance for precision in the short game. Comparatively, NXT Tour delivers longer distance with a higher flight, while NXT Tour S provides significantly softer feel. The new Velocity is reengineered with its largest and fastest core yet to produce explosive initial velocity for even more powerful distance thanks to proprietary LSX core technology The low-spin construction with leading-edge aerodynamics produces a soaring trajectory for remarkable carry and roll, while a new, thinner NAZ2 cover provides more playable feel in the short game. NXT/NXT Tour $34.99 per dozen; Velocity $29.99 per dozen 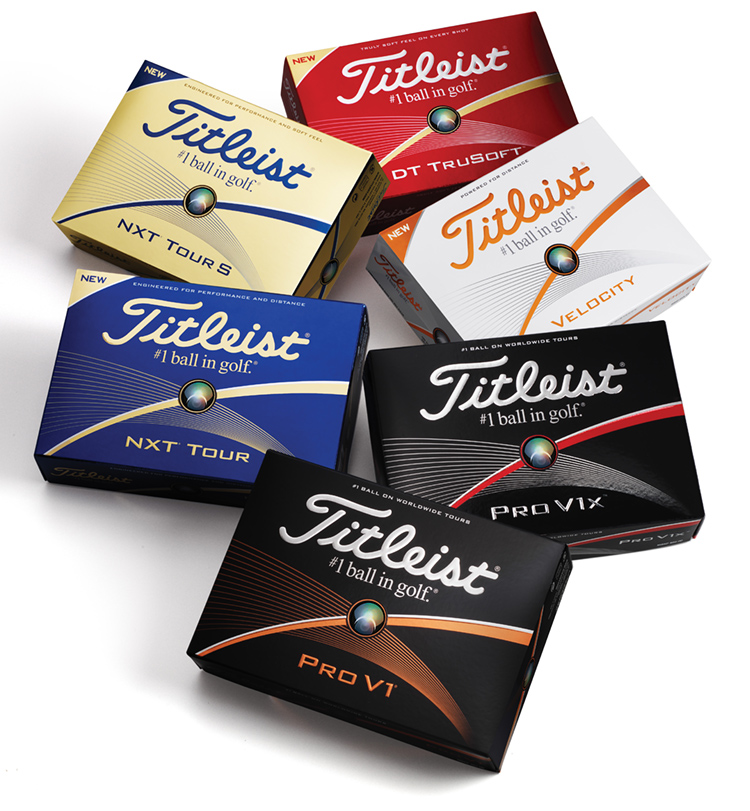 Never at a loss for giving golfers the widest possible array of choices in the all-important iron category, Titleist has rolled out a series of sticks that allow anybody on the spectrum to find the sweet spot and start shaving strokes with pin-firing confidence. 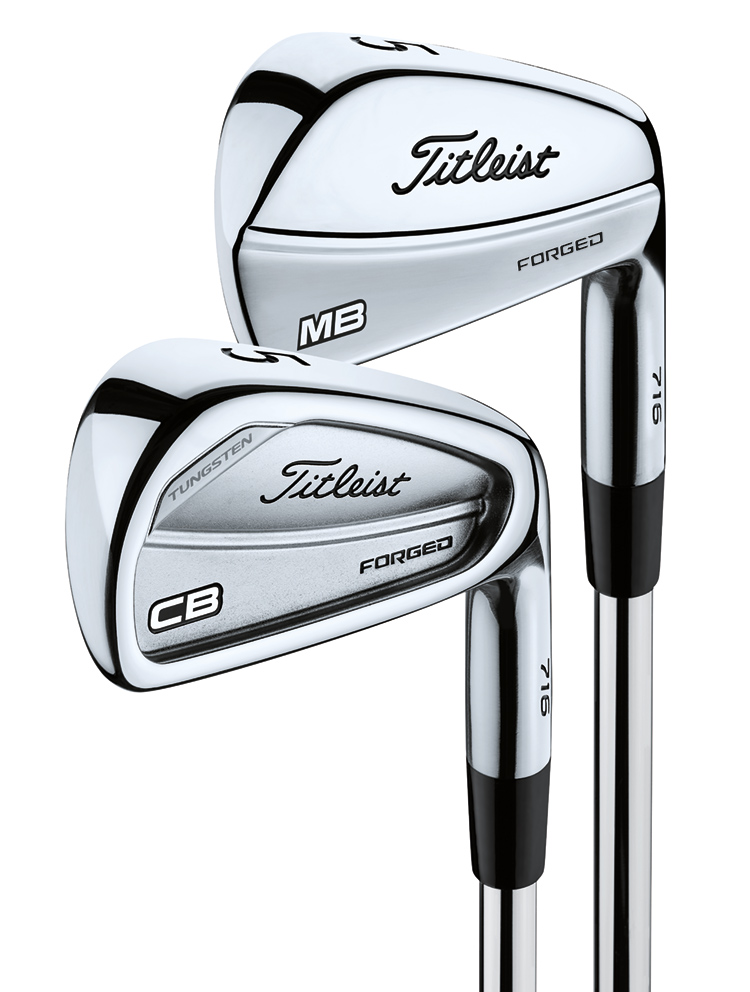 Start with the 716 T-MB utility irons ($1,599-$1,799 per set), which are precisely engineered using an extreme amount of high density tungsten to deliver an unprecedented combination of high launch, long carry distance and forgiveness in a sleek, muscle back frame and thin, fast, unsupported face that increases speed and launch for more distance. T-MB’s construction allows for maximum use of high density tungsten – an average of 80 grams per head, the most of any Titleist iron – providing a powerful combination of high launch and forgiveness with a playable trajectory. T-MB also features a pre-worn leading edge that reduces digging at the point of turf entry, with a trailing edge chamfer that produces a fast, smooth release from the turf.

The new 716 CB ($1,199-$1,399) is a modern cavity blade engineered with industry-leading amounts of high density tungsten for tour-proven shotmaking with added forgiveness. It is a pure muscle back blade with modern refinements that provides maximum shot control. They use extreme high density tungsten weighting to position the center of gravity (CG) low and perfectly aligned at impact for more speed with tour-proven trajectory and control. An innovative co-forged construction places high density tungsten low and on the perimeter for added forgiveness in its tour-proven profile. The 716 MB ($1,099-$1,299) is a precise, high muscle back design with a squarer toe, thin topline and pre-worn leading edge that delivers maximum shot control with pure, forged muscle back feel. 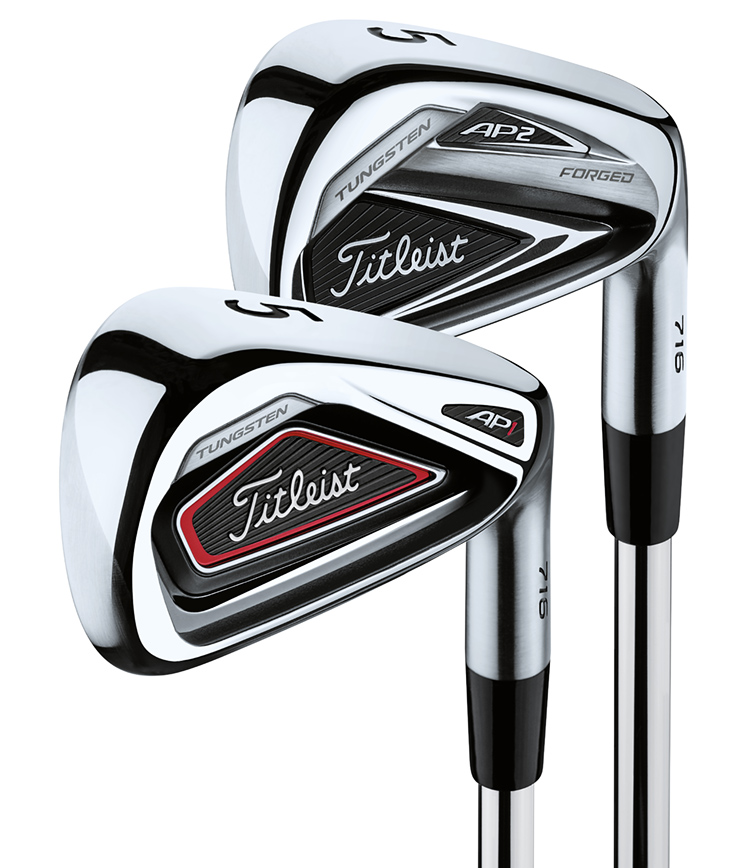 Finally there’s the AP1 and AP2 irons. AP1 ($899-$1,099) is the longest, most forgiving Titleist iron ever. New AP1’s extreme 360-degree undercut cavity design with a large, thin, unsupported face delivers speed and launch for more distance, while the industry-leading use of high-density tungsten weighting provides maximum forgiveness. A forgiving High-MOI Design – with 50 percent more tungsten than prior generation 714, at an average of 42.5 grams of tungsten per head – maximizes heel and toe stability without increasing AP1’s preferred blade length, while producing higher ball speeds. AP2 ($1,199-$1,399) is Titleist’s most advanced players’ iron made even better, delivering tour- proven distance with forgiveness and solid forged feel. They also use extreme high density tungsten weighting to position the center of gravity low and perfectly aligned at impact for more speed. An innovative co-forged construction places the high density tungsten low and to the perimeter, increasing MOI for greater forgiveness and consistent distance. Golf Tips recently tested the AP2 at PGA Village in Florida and found them workable and smooth off the face, with a handsome top line at address. 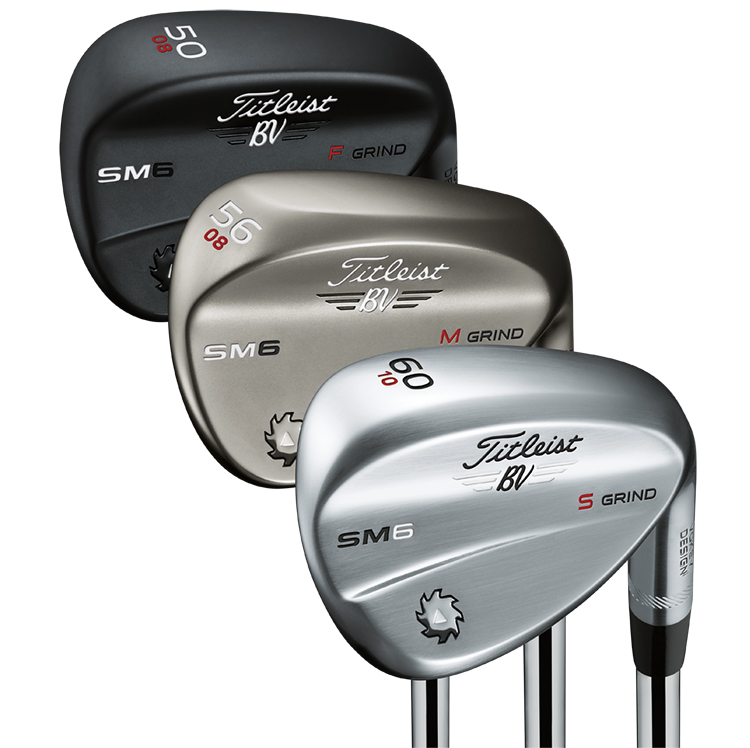 Mr. Cameron does it again. Engineered with innovative new face inlay technology, blend precision milled Scotty Cameron craftsmanship and enhanced multi-material construction, the new Select Newport putters deliver tour-validated performance with unmatched feel and feedback. They feature sleek, performance-oriented models with new technology, shapes and configurations to satisfy the variety of strokes, styles and preferences of golfers at every level of the game. The new face inlays — which wrap around the sole and disappear from the player’s view at address, as opposed to a traditional face insert that occupies only a specific center section of the face — are presented in three unique setups to complement each putter shape and size. Select Newport, Newport 2 and Newport 2.5 models are modern heel-and-toe weighted blades designed to support flowing strokes. Newport 2 Notchback is a slightly larger, angular modern blade with a notched flange, featuring a sole-to-topline 6061 aircraft grade aluminum inlay anodized in gunmetal gray. The Newport M1 and Newport M2 mid-mallets combine a 6061 aircraft grade aluminum inlay with Scotty’s face-sole pop-through technology. The face-sole is a single piece of lightweight aluminum that comprises the face inlay, wraps down and around to create the midsection of the sole and pops through the flange to create the sightline field. This concentrates weight on the perimeter to produce higher MOI and stability for “straight back/straight through” strokes. A Select Newport 2 Notchback Dual Balance model is also available for those players who prefer a Newport-style head but need maximum stability in their stroke. Like all Dual Balance models, Newport 2 Notchback DB has a 50-gram heavier head (400 grams total) and a 50-gram counterweight in the butt of the shaft. Each new Select putter features advanced stability weighting with two, customizable stainless steel heel-toe weights, stepless steel shafts and supple Red Matador mid-size grips developed to offer the comfort of a larger grip while maintaining responsiveness and feel (Newport 2 Notchback DB has a 15-inch Dual Balance grip). Select $379 | Dual Balance $399 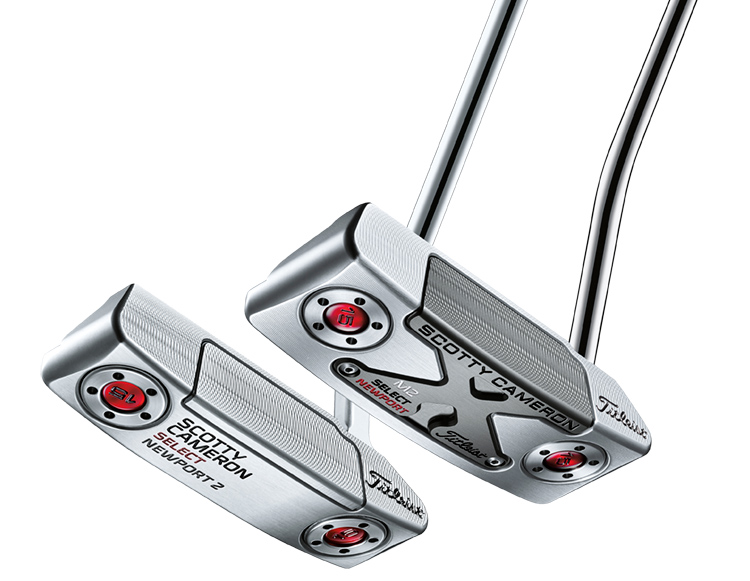 The new Titleist 816H1 and 816H2 models utilize Active Recoil Channel and Ultra Thin Face technology to generate high speed and low spin for long distance. A high MOI design increases speed across the face for more forgiveness on off-center hits, while the optimized center of gravity (CG) increases launch and trajectory for more shot-stopping control. The new hybrids offer a high performance choice over long irons by providing more speed, higher launch and a steeper landing angle to help players hold the green and stop the ball closer to the pin. They provide the most precise fit Titleist has ever offered with two models, loft choices every 2 degrees and a new 1 degree SureFit Tour hosel for independent adjustment of loft and lie. The H1 is a high-launching hybrid that flies farther and land soft, with a larger profile that provides confidence, with slightly increased face progression that performs well from the rough. The H2 hybrids has a more compact shape with a slight offset for iron-like shot control for players who engage the turf more aggressively. The Active Recoil Channel – positioned along the sole of the club head, close to the leading edge – delivers more distance by actively flexing at impact to launch the ball with lower spin and higher speed. It works in tandem with the Ultra Thin Face to deliver increased ball speed across the entire face. The high-speed, constant thickness face insert, made of high-strength Carpenter steel, is the thinnest Titleist has ever developed. The club is a true hit on Tour. Says Jordan Spieth, “The new 816, with the silver head and black face, is a really cool looking hybrid. It’s really clean, really crisp. When I strike it, it shoots off the face nicely. It goes a little higher than my 915 hybrid, and a little bit further. When you mishit a hybrid, you need it to stay on line, still get up in the air and to still go far enough – and that’s what 816 does.” $249