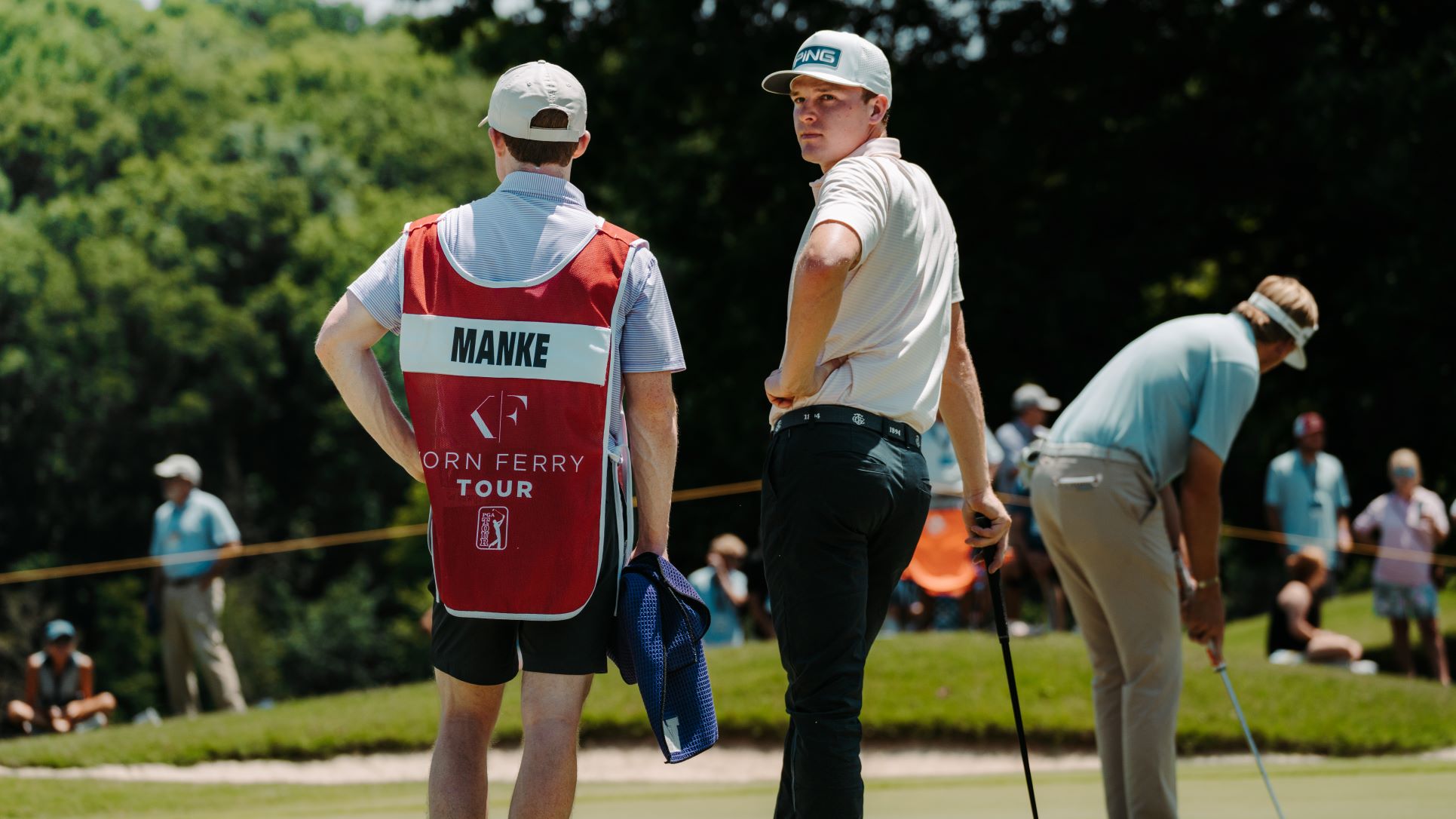 It would’ve been understandable if former University of Washington first-team All-American RJ Manke was more than a little road weary. For starters, he was 2,700 miles from Seattle in the heart of Upstate South Carolina making his professional debut at the BMW Charity Pro-Am at The Thornblade Club near Greenville.

On top of that, he was coming off a hard charge in the uber-competitive PGA TOUR University standings to finish fourth and qualify for the Korn Ferry Tour. Then, just two hours after arriving at Greenville-Spartanburg International Airport, Manke jumped online to take a final exam to wrap up his Masters of Science in Real Estate.

Over the next two days, he and his brother-slash-caddie Brett would log practice rounds in the heavy Palmetto State air at two courses connected by 20 miles of state and county roads. The following day in their opening round, team Manke fired a tidy 2-under par at the Tom Fazio-designed layout at Thornblade.

So, it was safe to assume the brothers Manke spent that evening chilling out and toggling between the RBC Canadian Open replay on Golf Channel and the inaugural LIV Invitational highlights on YouTube. Maybe catch a little in-room pizza delivery and break out the trusty Theragun.

“We found some tennis courts near our hotel and played tennis for a couple of hours,” said Brett Friday afternoon as RJ went through his warm-up routine on the range at The Carolina Country Club, the BMW Charity Pro-Am’s second course. “It was fun and took our minds off golf for a while.”

Boundless energy. In that way, and in so many others, Manke is the perfect brand ambassador for the upstart apparel brand RADMOR. RADMOR’s founders, Scott Morrison and Bob Conrad are former University of Washington golfers. And when they kick-started the brand in 2021, they naturally chose Seattle as their home base.

The two remained tight with the program and struck a partnership with RJ as he turned professional this spring. The multi-year deal has the former Husky standout fully clad in RADMOR shirts and pants for the next four years.

“Scott and Bob are a couple of guys who are excited about golf in the Northwest and wanted to help the University of Washington program as much as possible,” RJ said. “They’ve embraced the team and are good friends of the program. We’ve built a relationship with them because they’re such good guys.”

A big part of that “goodness” for Manke was RADMOR’s commitment to all-natural, high-quality cotton. An environmental ethos isn’t new in the golf apparel world, but a company unwaveringly committed to a sustainable footprint is a novel concept.

“You don’t really realize how much plastic you’re wearing,” RJ said. “You come out to these tournaments, and we’ve got aluminum cups and aluminum water bottles. People are trying to get rid of plastic, and they don’t really know that it’s used most in clothes. People are wearing it, and it sheds and wears off in the laundry.”

In the BMW Charity Pro-Am, Manke and RADMOR had found the ideal inaugural landing place. Easily the gold standard of Korn Ferry Tour events, the tournament generates zero landfill waste. Recycling and composting receptacles are available at every turn, and the water bottles for sale at various tents are forged from recycled aluminum.

“I couldn’t have asked for a better tournament for my professional debut,” RJ said. “There’s a lot of attention to detail, the courses are solid, and everyone is so nice.”

RADMOR released several summer additions to its men’s and women’s collections just before RJ and Brett departed for their week-long stay in the Upstate. RJ said they grabbed a dozen outfits to last them through a staggering swing that takes them from Greenville-Spartanburg to Wichita, Kansas, Falmouth, Maine, Berthoud, Colorado and then back east to Illinois and Missouri.

“Logistically, so efficient,” said RJ with his usual sprinkle of dry humor.

On hot days, he’s opting for RADMOR’s Vincent Player Performance Pants made from cotton, recycled polyester, rayon and spandex. And speaking of hot, the forecast for Wichita called for triple-digit highs during the early part of the week – temps “old school” cotton wouldn’t have been able to stand up to.

“I think the quality of RADMOR’s cotton comes into play in the heat,” RJ said. “This stuff isn’t like the golf shirts our dads had in the closet. The way it is blended and feels, it’s so comfortable and adaptable.”

“All the pants and shorts are so comfortable. Everything feels super comfortable and is professionally made,” RJ said. “It fits well, it doesn’t require any extra hemming or custom fitting. It’s a straight, good-to-go pro look right out of the box.”