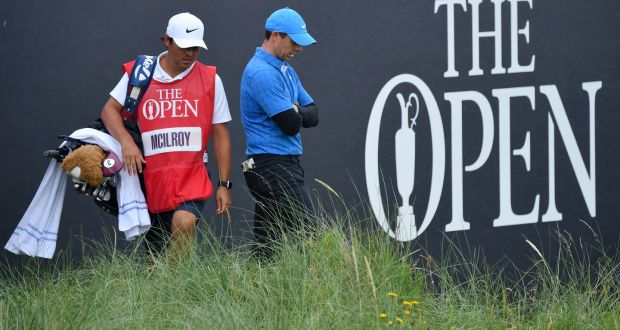 For once and probably the only time in my life, I have something in common with Rory McIlroy.

We both know how to make quadruple and triple bogeys, in scarily similar ways.

Sure, I’m just hacking up one golf course or another on a regular basis while he’s going sideways — 79 strokes’ worth of sideways — on a course for which he still holds the record, on the sport’s oldest and grandest stage: The Open Championship. But blowup holes are blowup holes no matter how you slice them, and they don’t discriminate between a 12-handicapper and the No. 3 ranked player in the world.

Take Rory’s opening tee shot. I can’t count the times I’ve pulled what I thought was the “smart” layup club, such as a 4-iron, and didn’t commit to it, yanking it left into whatever nastiness lurked there. Why not just let loose with the big dog, especially when you’re one of the greatest drivers of the ball the world has ever seen? Just goes to show that even in golf, too much caution leads to tension, and tension kills.

Then he continues to channel yours truly, and millions of us suffering from SSDS (Severe Strategy Deficit Syndrome), by compounding his predicament into a snowman — first by hooking his fourth shot into an unplayable lie, then by hitting his sixth just far enough beyond the hole to put his putt for triple into the danger zone. Then missing the putt.

Four over after 15 minutes. Oy.

To his credit, Rory took his brutal start like a man and righted the ship for the next 14 holes, notching a couple birdies along the way and going one under for the stretch.

Then his next version of me showed up on No. 16, a wicked widowmaker of a par 3, where he should have escape with bogey but, instead, carelessly whiffed the putt, as I’ve done dozens of times over the years, usually out of disgust or rage or both (I’m better at bottling up such poison now, I swear). Up jumped the evil horseshoe from close range. Double-bogey.

OK, I’m sure Rory thought, I can still find a way to birdie the last two holes and salvage a 74, a manageable three over heading into Friday.

Nope. On 18 all hacker hell broke loose again. Poor drive, bad second shot that barely moved, third shot back to the fairway, push to the right of the green, a decent chip to the green.

Two putts for a triple.

Even more to his credit, Rory stood there for a TV interview moments after the flames had died down, knowing full well in his Irish heart that he’s most likely missing the cut, tied for 150th in a field of 156. No matter how the media in his native land spin it, their favorite son is done, while fellow islanders from both sides of the line between Republic and Ulster — Graeme McDowell, a happy-go-lucky Darren Clarke and especially Shane Lowry, who held the lead in the clubhouse for much of the day — are in at least plausible position to make the weekend and keep alive the dream of a local hauling in the Claret Jug.

Rory won’t be that local.

Nor will Tiger Woods achieve his 16th major, finishing just one slim stroke ahead of Rory at seven over par after a round that was a slow-bleed death to Rory’s three-hole meltdown. He warned us that he had no chance, and he was right.

But the guy with whom I can most closely relate after a fascinating first round at Royal Portrush? Former Open champ David Duval, who hit the wrong ball on one hole to card a 13 on his way to a nifty 91.

Now THAT’s what I’m talking about. First Guinness on me, Mr. Duval.