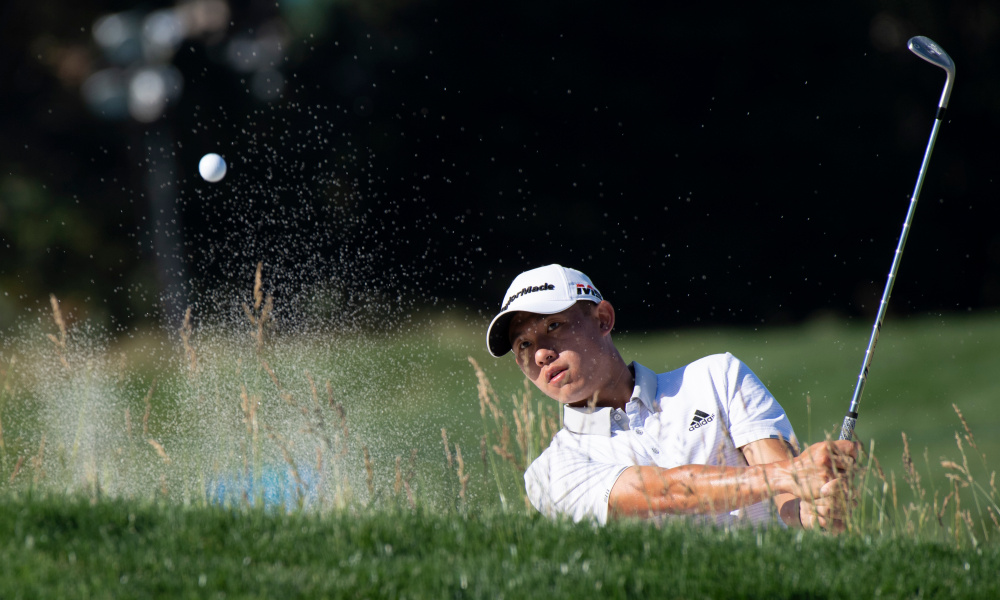 Just seven tournaments deep into his PGA Tour career, Collin Morikawa is off to what I can only call a blazing start.

Six cuts made and five straight in 2019, in consecutive weeks.

A tie for 14th in his third event, the RBC Canadian Open, followed by an eye-popping tie for 35th in the U.S. Open at Pebble Beach.

A tie for 36th at the Travelers in Connecticut, then a 20-under-par tie for second at the 3M Open in Minnesota and a 17-under tie for fourth at the John Deere.

This all follows a stellar career at Cal Berkeley, where he finished his senior year as Pac-12 Men’s Golfer of the Year, Individual Medalist in the conference tournament, became the school’s first four-time All-American and finished the year ranked No 3 in the nation. As a junior he set the school’s single-season stroke-play average of 68.68.

One can understand the 22-year old from La Cañada-Flintridge, California, beaming with confidence no matter where he’s teeing it up.

This week that’s back in Morikawa’s own Pacific Time Zone for the Barracuda Championship at Montrêux Golf & Country Club in Reno, Nevada — the PGA Tour’s “other” event opposite the star-studded WGC FedEx St. June Invitation in sweltering Memphis.

Morikawa will play in that event one day, perhaps sooner than we think. For now he’s joining 131 other Tour pros at a scenic Jack Nicklaus layout that has hosted the event since its 1999 debut — guys including major winners Padraig Harrington, Martin Kaymer, David Duval, Y.E. Yang, Mike Weir and John Daly as well as several former Barracuda winners, a slew of seen-it-all vets and fellow young studs like Sam Saunders.

I’m here to tell you Morikawa can win it.

I’m not alone. Four of five PGATour.com experts consider him a strong contender, and two of them put him in the winner’s circle after the dust settles on the only Modified Stableford-scored event on the Tour’s schedule.

“I feel ready every single week,” he told me after his Wednesday pro-am round at Montrêux before heading to grab a bite and rest up for his first mile-high competitive round in the Sierra Nevada foothills. “And that’s what’s awesome about being out here — I’m ready to compete and try to win every single time.”

He came very close at the 3M. Only fellow college standout Matthew Wolff got past him to grab his first win. That set him up for another strong showing at the Deere, where he led during the final round after an eagle on the second hole before eventual winner Dylan Frittelli punched his ticket to last week’s Open Championship at Royal Portrush.

After a much-needed week off, Morikawa is using those Top 10 experiences to fuel his game in Reno.

“I had chances throughout the front nine of the John Deere, a lot of good chances for birdie and they just didn’t drop; if they had dropped, maybe the back nine would’ve been a little different. But I think I still played pretty well. I played very solid the last day. I’m just waiting for those few rounds where the putts drop a little more, and it’ll be really exciting for all four days.”

Perhaps this is the week those four days come. Morikawa and his caddy certainly have done their homework, gauging how far he’ll hit shots at elevation compared to sea level.

“We’re roughly around 10 percent more, depending if it’s in the morning or it’s getting hot; we kind of vary off that. “If we have a wedge shot, we go a little less. But for me it’s just really trusting the numbers, not thinking, ‘is this club enough? Is this club too much?’ It’s just, ‘let’s try this club.’ If you hit a bad shot, you want to at least commit to what you’re doing or else you’re going to be in a lot of trouble this week. Out here some tee shots can get away from you really quickly if you don’t pay attention with elevation. So you’ve just got to just stay sharp. I think I’m just really ready and prepared for this week and also next week.”

Actually, Morikawa has been ready for this chance for Tour success for years, thanks to a supportive family and a fruitful, trusting relationship with his longtime swing and mental coach, Rick Sessinghaus, who preceded me as editor of Golf Tips.

Morikawa’s dad introduced his 8-year-old son to Sessinghaus on the heels of a Nike clinic at his home course. “Rick was one of the better coaches at this course. So I tried working with him and it’s just been a process — so cool to look back on how little I was when I started. I had those goals when I was little, but you don’t know if an eight year old is gonna make it to the Tour.”

Sessinghaus has been there through every stage of Morikawa’s development, helping him hone what has become one of the prettiest swings out there, with a low, slow takeaway that builds steadily into a powerful move through the ball (right now his drives average tick over 298 yards, not bad for a guy who’s 5-9 and 160 pounds), producing a low-trajectory power fade that fits Montrêux well, even on right-to-left holes. “I’ll just hit a fairway metal or hybrid on those and keep it out of the bushes,” Morikawa says.

More importantly, Sessinghaus has poured every ounce of his skills and experience as a mental coach into his most successful pupil to date without getting too much into his head.

“We just keep it simple. We’re not trying to make things more difficult than they are. We know what my tendencies are.

“We will talk through a lot of rounds, go through them hole by hole. If nothing [to be concerned about] pops up, we go through certain words that keep my game where it is. For me it’s a lot about tempo. It’s a lot about rhythm, being creative out there.

“That’s my word: creative. It’s what I use in my pre-shot routine, helps me lock everything out. It has nothing to do with hitting fades or draw. It allows me to picture everything — to see my shot, feel it in my hands and just react. It’s my little trigger. If I just say that before every shot it’ll get me in that same state, ready to hit that next shot.”

Morikawa says that simple reliance on trigger words serves him well — and expects it to hold up with the more incendiary Stableford format, especially in concert with his more technical shot plan.

You’re gonna make a couple mistakes here and there, elevation or distance wise, but you just gotta get used to it and trust everything else because it’s all feel out here. You gotta just trust it, feel it, hit good shots. And if they react the way you think they’re going to, that’s all you can do.

“I don’t hit the ball too high, but the guys that hit it really high out here are gonna have a little more trouble controlling it, especially with some swirling winds throughout the trees. Wedge shots aren’t going to be as much, but when you get the long irons, they do float a little bit farther. They stay in the air a little longer. So it’s really just calculating the numbers, getting used to it and trusting it.”

Great advice for any golfer (I’m taking notes), but given his recent run — and now that he’s had several chances to observe Tour vets going through their practice routines and watching how they handle the vagaries of every round — does he believe this could be his week, at an event that has crowned several future major winners including U.S. Open champion Gary Woodland, who won in Reno in 2013?

“It’s a brand new week and I think that’s the mindset I had at John Deere — I’m going to take a lot of positives from the past week, and the past couple of weeks, and that’s only going to help me, but it doesn’t mean I’m just going to make birdies easily. You still gotta hit good shots, play smart, play to your strengths and then make some putts.”

He’s the real deal, he’s ready, and for at least this year, the “other” little tournament out west, in my home town, has him.