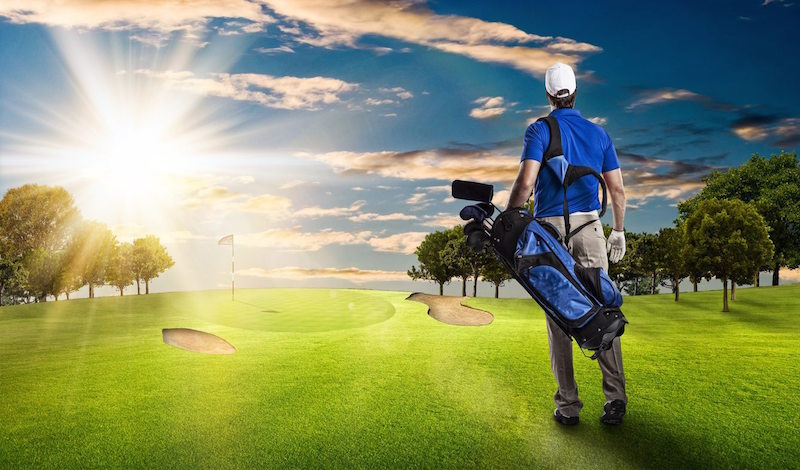 I now have concrete (or stone) proof, by way of this little story about a thousand-year-old cathedral in southeast England that has installed a temporary mini-golf course in its central nave to help young people learn about building bridges, literally and figuratively. It’s open through August, though not during worship time.

This golf-meets-God gambit has gathered its share of criticism, of course. One commentator called it “an act of descration.”

Back here in America, I can think of far worse acts that have nothing to do with golf, though I’ll keep those political examples to myself.

I’m much more in line with the Archibishop of Canterbury Justin Welby, who told clergy that “if you don’t know how to have fun in cathedrals then you’re not doing your job properly.”

And golf is, most certainly, the essence of fun. Even when it’s not, which is where it intersects beautifully with religion or, at a minimum, situational spirituality.

Think about it: even the staunchest atheist might catch him or herself beseeching the heavens for deliverance after a heinous tee shot into the water or woods, or while facing a slippery, crescent-shaped downhiller from 12 feet.

I’ve certainly gone there, leaning on my deep belief that the Higher Power has time and room to hear, if not exactly act upon, every prayer that comes their way.

“Please God, help me find the fairway just this once.”

“Give me strength to slow down and make a solid swing.”

And on and on.

Not that prayer is any replacement for the hard work, dedication to practice and investment in professional instruction and equipment that’s necessary to achieve whatever golf goals we have.

So is the occasional, uh, taking of the Lord’s name in vain when certain prayers aren’t answered. I’m guilty of that, too. Just ask my fellow par-seeking pilgrims.

It’s OK. I’m forgiven, though I won’t go so far as to count myself as “chosen,” as some PGA Tour players have come dangerously close to declaring when they say that they’ve felt Jesus “walking beside” them as they strutted up the final fairway to claim victory.

My question to that is, “OK, but was he there when you yanked one into the drink for double-bogey?”

As for bridge-building, what better vehicle than golf to connect people, out there in creation, away from the day-to-day secular slog, across faiths (or lacks thereof) and belief systems, economic and cultural backgrounds, and even language barriers?

In my travels I’ve teed it up with people across the spiritual spectrum, from pastors and fellow parishioners, Christians and Buddhists and Muslims and “Nones,” and other than the odd joke featuring a “preacher, priest and rabbi” — or a mention of that lightning-struck priest in “Caddyshack” — we always avoid hardcore discussion of religion.

So, hat’s off to the wily and enlightened Anglican clergy who decided it was OK to add a little putting fun to their pursuit of divine knowledge.

Church and golf? Amen, I say.