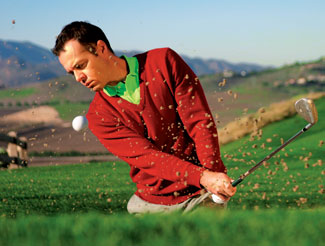 If your equipment had superheros, the wedges would be Clark Kent. At first glance, they're nothing special. But when you're in trouble, your wedges become Superman, helping you out of tough situations. Today's models are true life-savers, and they don't need a telephone booth.

Drivers and irons are fun to hit. With each, you can consistently launch the ball more than a football field in length. Putting can be exhilarating, too, especially considering it's where golfers make up to 40% of their shots. But what about that critical distance from 100 yards away from the green, or from within a hazard, a bunker or deep rough? Truth is, as popular as drivers and putters have become, golf's real make-it-or-break-it distance lies within 100 yards of the green.

Ask any touring professional and he or she will tell you that your wedge game is where you can make up the most strokes. And since you're not going to hit every green and you're bound to find a bunker or two during a round, honing up on your skills from 100 yards and in is critical. Also, it's equally important to make sure you have the right tools to perform the myriad of shots required from these distances. High lobs, low chips, pitches, bump-and-runs—you have to have the right tools to execute them all. The good news is that there are plenty of options to help you get the job done. Modern wedges come in a wide range of finishes, sizes, metals and with grooves of varying shape. The question isn't if wedge technology exists, it's how can you use it your advantage.

The bulk of wedge design traits focus on the production of feel, which is of paramount importance in the short game. But when considering performance, nothing elicits more of an affect than sole design, encompassing the parameters of grind, shape and bounce angle. Basically, how the club interacts with the turf will tell a lot about how it will perform in your hands. Look to the sole first to find the most useful wedge for your swing.

Our Pro's Take On: Wedges
I begin every new lesson with the short game. It doesn't matter if I'm teaching a beginner or a Tour player, if you can learn to turn three shots into two, you'll shoot lower scores.

In instruction lore, there's no greater story than Byron Nelson accepting a visit from a young Tom Watson who, at the time, was hampered by an errant driver. Eager to show Mr. Nelson his flawed swing, Watson yanked his driver from his bag and set up to hit. Before he could start his backswing, Nelson stopped him, reached over to Watson's bag, pulled out the sand wedge and handed it to Tom. "If you can show me you can swing the sand wedge correctly," Nelson quipped, "I'll let you hit your driver."

Heed Nelson's advice and perfect your wedge swing before moving up to your longer clubs—it sets the tempo for all full swings.
— Marshall Smith, Peoria Ridge GC,Miami, Okla.

Bottoms Up
While most wedges share a common shape and profile, what's happening on the sole really tells the story of how the wedge will perform. Sole shapes range from the subtle to the blatant, but all are designed to serve a particular purpose. Thinner soles, or soles with dual-bounce angles, allow golfers to adjust the clubface open at address without affecting the wedge's natural bounce angle. Wider soles are designed for golfers who want to avoid excess digging and generally work best when the face is set square at address.
Built into the sole shape is the bounce, which refers to the angle between the leading trailing edges. Golfers with steep attack angles (those who make big divots) generally perform better with high-bounce wedges and golfers with normal to shallow swings, or who like to sweep the ball, do better with mid- to low-bounce models.

Cavity Search
There's no denying that the most popular wedge design is that of the cast or forged blade, an equipment stalwart since the days of Nelson and Sarazen. However, several major manufacturers, including Cleveland, are integrating small cavities in the back of their blade designs. Cavities not only serve as a means for more forgiveness, they can actually be used to adjust the CG higher or lower on the clubhead for either a higher (low CG) or more controlled (high CG) trajectory.

Flip the club over and check out the grooves on today's top wedges. With computer-assisted milling machines, manufacturers can cut precise grooves at exacting dimensions and spacing for the utmost in spin and consistency.

Options, Options
Any respectable family of wedges is available in a variety of loft and bounce configurations. In the case of Cleveland, the two dots indicate a "standard" amount of bounce for the given loft, which company designers have determined through years of testing and observation. Like Cleveland, most major manufacturers have also determined what "standard," or "low" bounce means for each loft increment, and built their wedges accordingly. What you need to know is that as wedge loft increases, bounce should decrease, and vice-versa. If your current wedge set doesn't adhere to this rule, fix it.

Well-Connected
Except for a few putter models, wedges have the longest hosels in golf. They're designed that way purposely, generally to raise the CG and afford more shotmaking versatility around the greens.

Material Matters: Rust
In today's golf shops, wedges generally fall into two categories—chromed or unchromed. Chromed wedges are generally plated with nickel and/or chromium to protect the wedge from rust as well as to beautify the looks of the clubhead. Chrome can actually harden the face of what's otherwise a soft metal wedge for what some manufacturers consider as a recipe for added spin. Conversely, unchromed carbon-steel wedges often have an oil-based coating when you buy them, which later wears off to reveal a rusted, brownish finish. Some golfers claim the rust adds spin, while other opt for this look due its no-glare appearance. Either way, most experts agree that it's the grooves that impart the spin, not the finish. —Ryan M. Noll

Understanding Our Charts
Features: The primary design elements that make the wedge(s) noteworthy.
Advantages: How the primary design elements are meant to elevate the performance of the club.
Benefits: A general recommendation as to which skill level or player type would best be served by the model in question.
What We Like: We have our preferences, too. A quick description of what impressed us in our review and testing.
Lineup: The other wedge models available from the manufacturer.
Clubhead: The primary material from which the club is either forged or cast, usually a form of stainless or carbon steel. There are two basic designs: cavity-back or blade.
Clubface: Indicates the material used for the strike area.
Design: Here you'll find whether the club is forged or cast, and its general shape. Basically, wedges fall into two shape categories—blades or cavity-backs.
Size: Three sizes listed—standard, midsized and oversized.
Clubs: Lists the loft/bounce combinations available in the line and whether or not the clubs are available for lefties.
Shaft(s): These are the stock graphite and steel shaft offerings from the manufacturer.