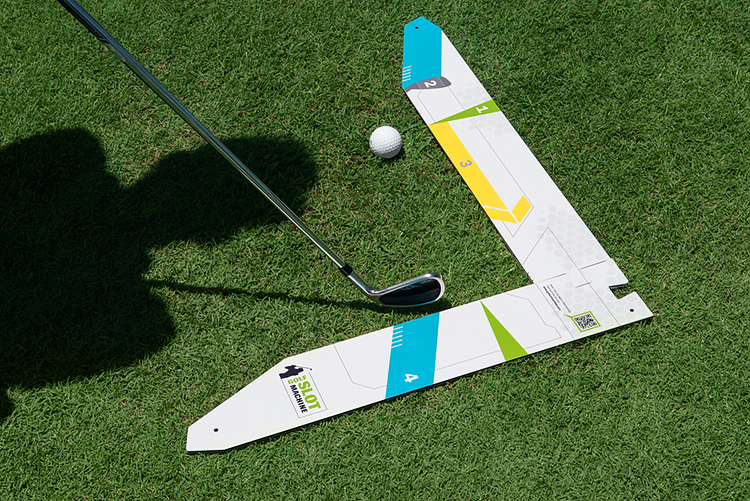 Still looking to hit the low-scoring jackpot? Maybe this beautifully simple and straightforward training tool — endorsed by PGA Tour pro Chris DiMarco and others — is the ticket. Golf Slot Machine helps groove that hallowed inside-out move in seconds. Dropping the club in the “slot” is within every golfer’s capabilities, and this L-shaped, foldable, portable item proves it. Many amateur golfers tend to use their upper body to swing at the ball, resulting in an over-the-top swing, loss of distance and loss of ball control. By using Golf Slot Machine, golfers of all experience levels intuitively get in the slot. It’s user-friendly with a color-coded, four-step method that eliminates overthinking your position and ingrains in your mind and muscles the motion you need for the correct golf swing. And, flip it over for a bonus —an alignment aid that gives you correct ball positioning for drivers, woods, irons and wedges. There’s no elaborate set-up and it fits right in your golf bag. $89.95
golfslotmachine.com 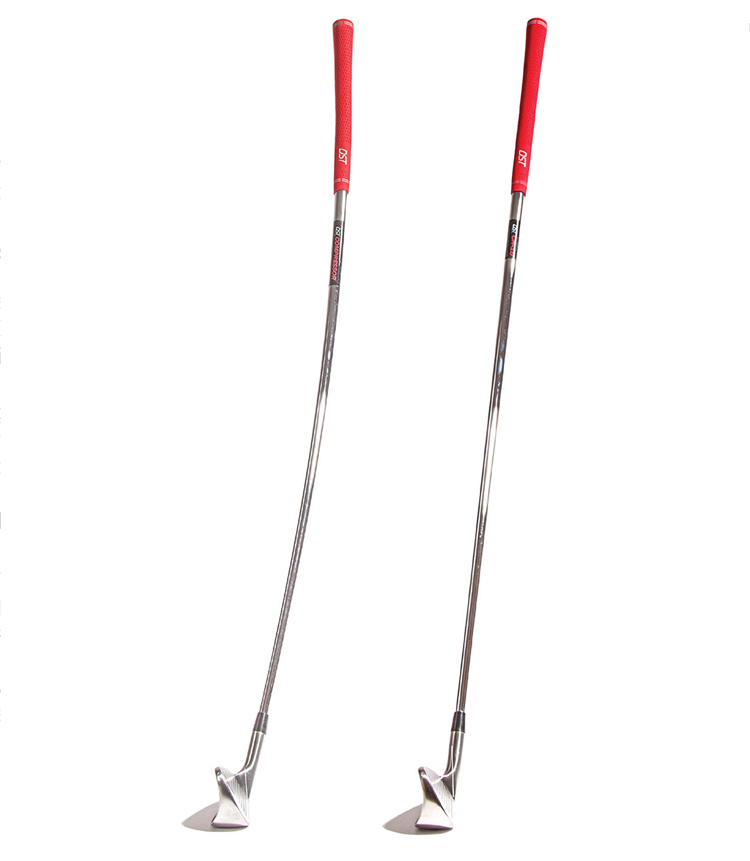 DST COMPRESSOR Since we first reviewed the DST Compressor last fall, the deceptively simple swing trainer — which immediately produces the proper “get to your left side” sensation crucial to solid iron play — has picked up even more stream among Tour players, including Fabian Gomez, whose breakthrough PGA Tour win came at the 2016 Sony Open in Hawaii. Four hundred top sticks in all are packing either the originally bent-shafted Compressor or the newer straight-shafted model, which still has the “Hand Position Alignment Marker” on the top of its hose to assure optimum forward-lead at impact. The club helps builds muscle memory of an address position and optimal movement through impact. Mastering these mechanics improves accuracy and consistency, ultimately lowering scores across the board — men and women, adults and kids, scratch players or higher handicappers. $99
dstgolf.com 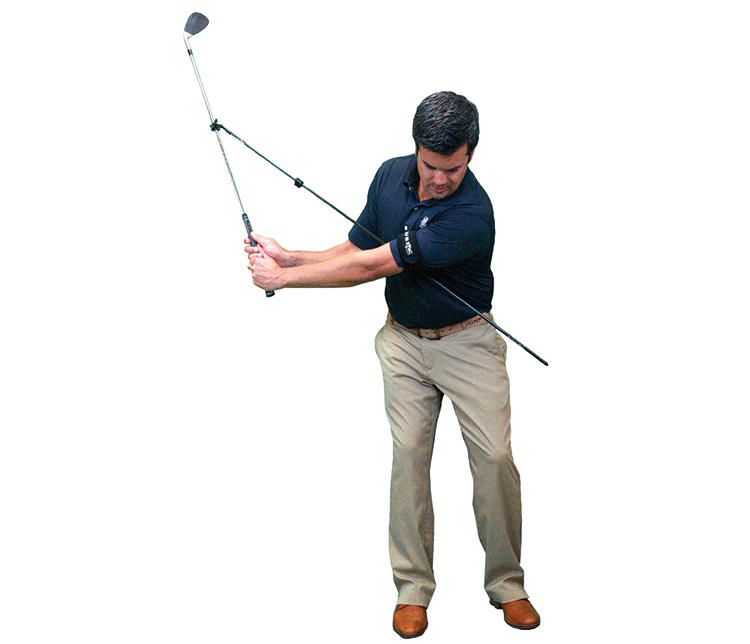 Straightforward in design yet brilliantly effective in synchronizing and honing the swing, Golf In Sync — invented by Swedish golf instructor Niklas Eliasson — has been discovered by serious golfers worldwide. It’s particularly good for refining the short game. Golf In Sync helps a player perform a synchronized swing in which body rotation generates power and in which the arms, hands and club naturally follow the body’s motion via a long rod that connects to the upper lead arm with a Velcro sleeve on one end and to the shaft of a club on the other; that end, in turn, slides along the club to maintain the proper “L” angle going back and through. Also useful for full-swing training, Golf In Sync enhances a player’s understanding of the value of consistently repeating a successful swing movement during training and practice. It’s all about muscle memory, and this product delivers. $79
golfinsyncusa.com 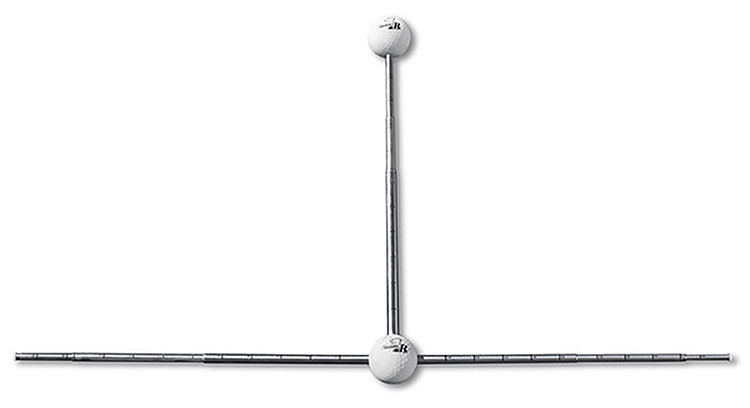 The prescription for immediate improvement is right there on the ground in front of you, and that’s why Hackers Rx is such an effective tool — it fixes any alignment issue simply and quickly, replacing those old shafts or random 4-irons you’ve been tossing on the practice tee. That’ll work for target line, but what about foot and vball position? This is a small, collapsible and portable consists of three telescoping rods and two plastic golf balls that unfold to a “T” — as in 90-degree angle — for a variety of club positions. You get immediate reference points on all clubs, and can position the Rx to set you up for a draw or fade on demand. $44.95
www.hackersrx.com 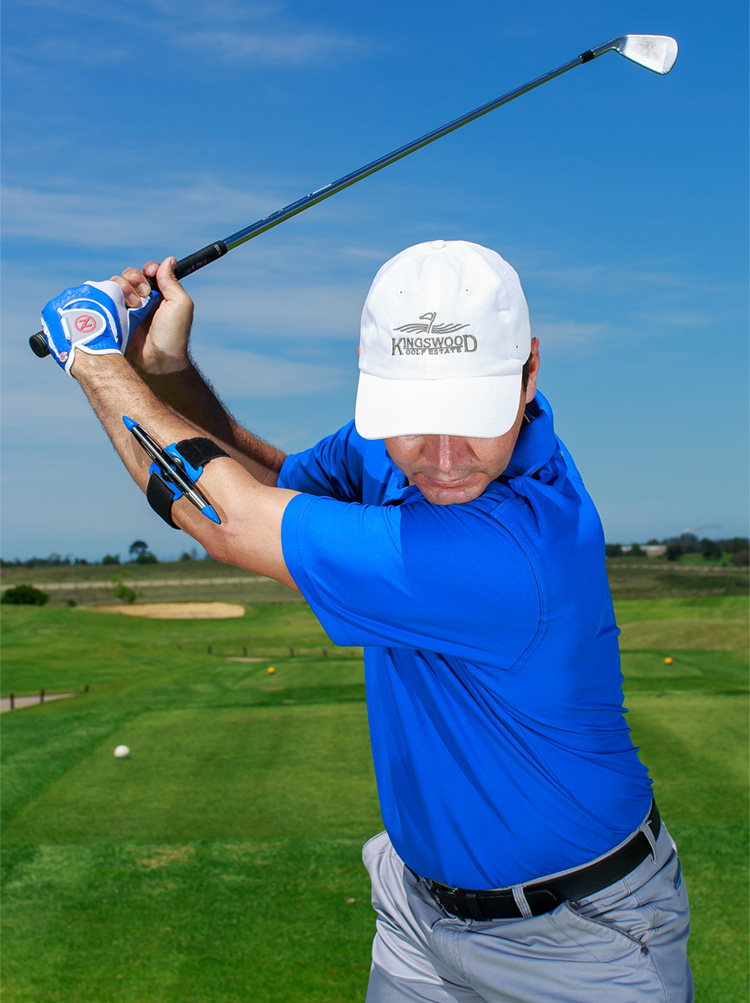 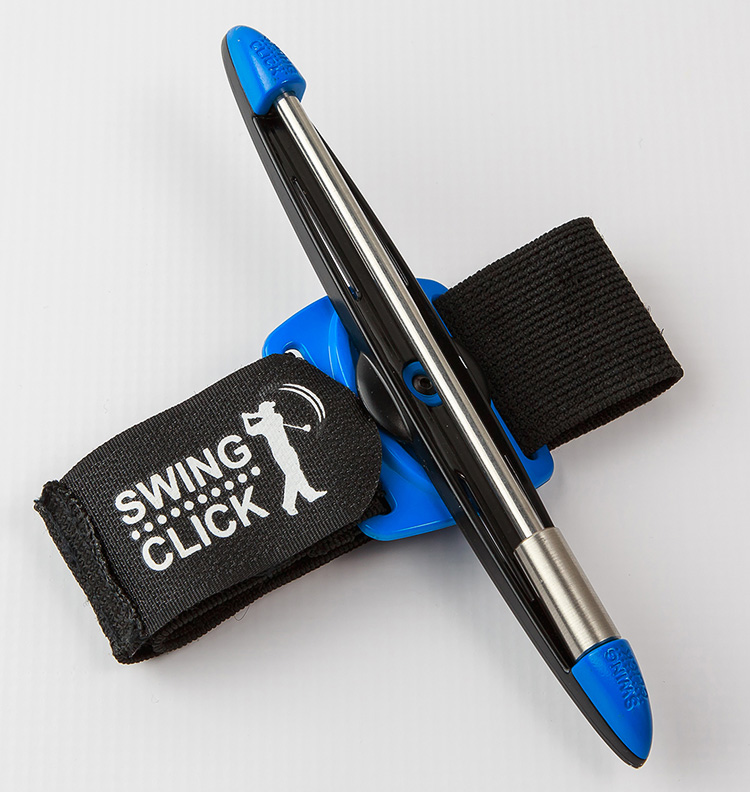 Auditory cues and clues are a practicing golfer’s best friend, from the sound of the ball leaving the clubface to the even more pleasant tones of that same ball sliding into the cup. The new SwingClick Plus — an improvement on last year’s popular SwingClick — made a strong debut at the PGA Show with its still-simple approach to dialing in your swing’s timing for solid ball contact. It’s as unintrusive as it is functional, strapping onto a golfer’s forearm; it makes a clicking sound at the three main junctures of a swing — at the top, at impact and at follow-through. Muscle memory, a smoother transition and better overall rhythm results, and it works with any club — because it’s attached to YOU, not the stick. And the new Plus’s sleeker design and more adjustable strap makes it truly one-size-fits-all. It now comes in four colors, too, and slides easily into your bag so you can keep that newly ingrained tempo going as you start your actual round. The original SwingClick is available as well. $39.99
www.swingclickgolf.com 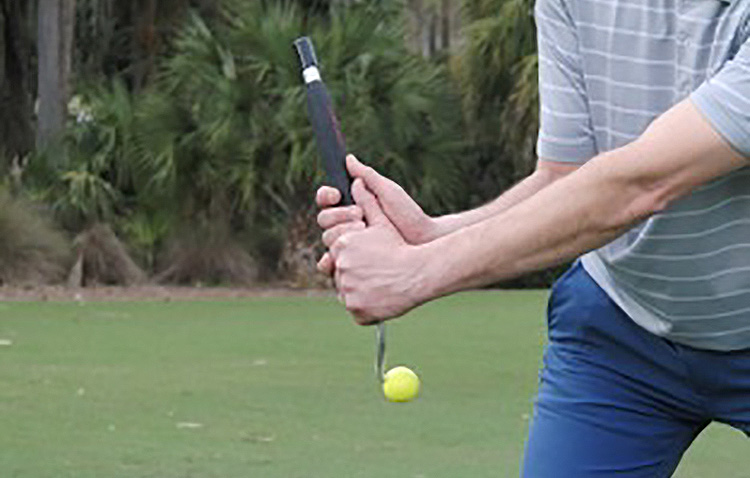 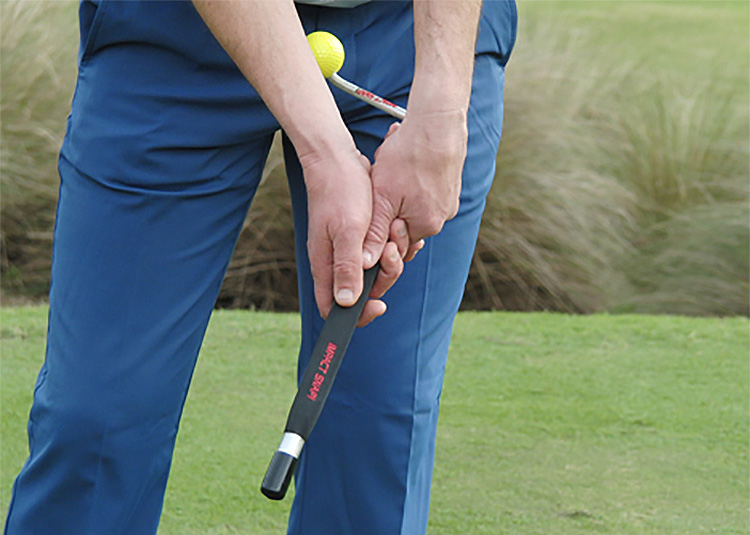 Invented by Kelvin Miyahira and developed by Marty Nowicki, lead instructor at Turning Stone Resort near Syracuse, New York, ImpactSnap was designed to train the wrists and forearms in three different motions that occur in a proper release of the golf club during a full swing — cocking and unlocking of the lead wrist, flexion (bowing) of the lead wrist and supination or rotation of the lead wrist and forearm without sacrificing the integrity of the flexed lead wrist. As Ben Hogan wrote, using the wrist and arms properly is a must if you want to play great golf. Once you’ve got the proper grip and pressure in place on the ImpactSnap’s specially designed flat grip and take the address position, the attached ball will be positioned below the lead forearm; by lowly moving the ball so it touches the inside part of the trailing forearm, the wrist will accomplish all three moves. Start out slowly; when the ball is near the inside or the under part of the trail arm, swing the unit back to waist high where the wrists will start to cock; the trainer’s sliding weight will will load and the yellow ball moves away from the forearm. Move both forearms forward leaving your wrists in the loaded position, once the hands pass the center of your body, slowly unlock and move the yellow ball so it touches the trailing forearm. The correct follow through position finds the barrel of the unit pointing to your ball/target line about 10 feet past your body. After a few slow swings, if pressure is in the correct places, the wrists will start to free up and move correctly. ImpactSnap ingrains what a full speed release feels like and trains motor skill patterns. It doesn’t take long to get the “snap” of it. $89
impactsnap.com 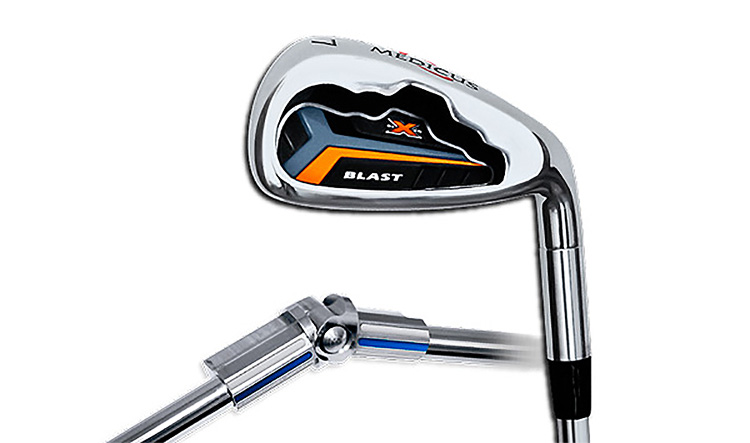 MEDICUS TRI-HINGE 7-IRON Medicus got its big start in the training aid industry with the original Dual Hinge driver, a club that shows swing flaws from the instant you take the club back. Now the leading developer of golf swing training products for more than 20 years has unveiled its next-generation practice club, the TriHinge 7-iron that helps players learn and hone their shot-shaping skills. This breakthrough product allows a player to practice not only straight shots, but work on fades and draws. This club features an MA9 performance head, which better mimics the quality of clubs used on the course. The head of the Tri-Hinge has three adjustment positions marked on its hosel: Blue to practice fades, Red for straight shots and the Black alignment for draws. Its shaft also has a set-screw for adjusting break point tension. “As their game improves, most golfers want to learn to work the ball,” said the club’s designer, Mark Adams. “The Tri-Hinge will help them do it.” $149.99
medicuskickx.com 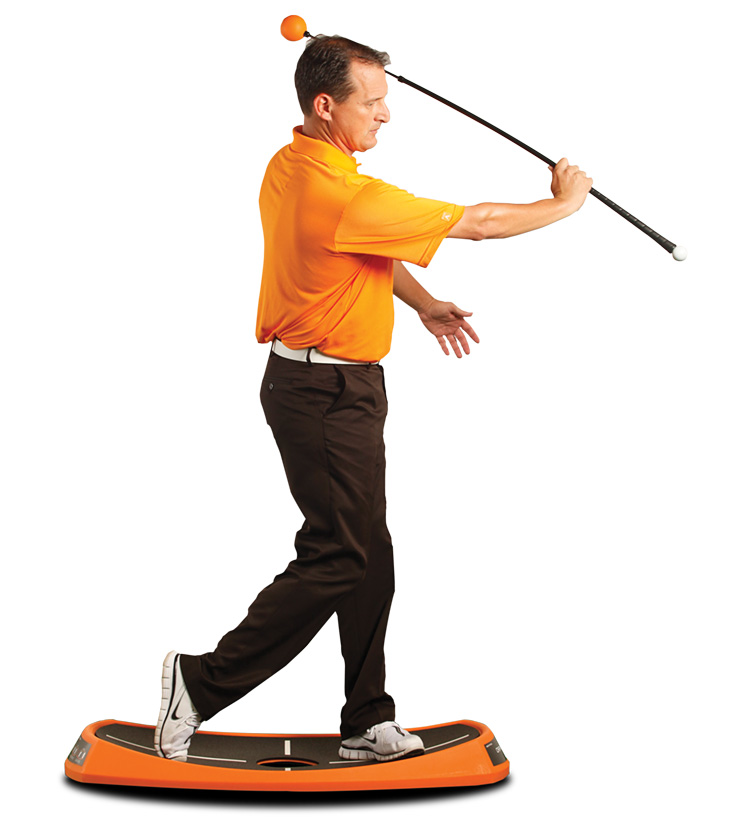 ORANGE WHIP TRAINER No, this isn’t a brand new training aid, but it’s long been a Golf Tips favorite, for good reason: The Orange Whip quicky and efficiently ingrains balance and tempo into every golf swing — the foundations of true and repeatable power and accuracy. Just look at any Tour pro in motion, as PGA Class A Pro Jim Hackenburg did over the years, and you’ll get the concept that led him to design and produce the Orange Whip. “Most amateurs, and many pros, are very concerned with positions of the golf club during the swing,” Hackenburg says on his website. “They get lost in trying to achieve various positions they are convinced are necessary as they attempt to hit at the ball rather than swing through the ball. I took the focus away from position and their hitting action, put it squarely on their motion, and by doing so their results (and positions) greatly improved.” It’s also a solid workout, engaging the core muscles thanks to the weighted orange ball at the end of the whippy shaft. Within minutes working with Hackenburg’s Foundation Drills, in doors or out and any time of year, you’ll groove that perfect release point. It’s available in four lengths (one for juniors), and there’s a Putting Wand, too. Combine the Whip with the Orange Peel (also shown, $179) to truly dial in balance and the right swing plane. $99-$109
orangewhiptrainer.com