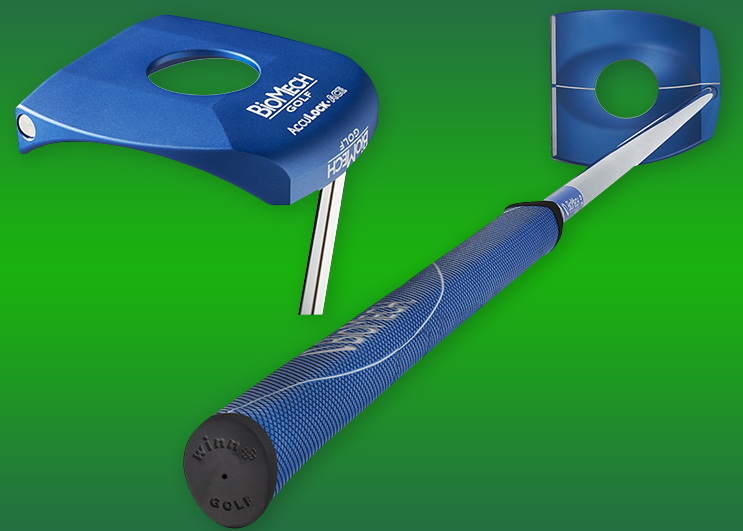 The design of the BioMech AccuLock Putting System — with the shaft mounted at the very rear of a uniquely shaped mallet or blade head — optimizes the form and function of the golfer’s body and putting motion. Put in action by several teaching and Tour pros including Heath Slocum and backed by sound science and years of research and testing, the putter sets the golfer in a natural, athletic, balanced position. The AccuLock Putting System simplifies target alignment and produces a precise and accurate core-powered putting stroke (rather than relying on the inconsistent movements of the hands, wrists, and arms), which produces a measurably superior, straight putting stroke. “If your golf equipment doesn’t make you play and feel better, replace it,” says Dr. Frank Fornari, BioMech founder and CEO, whose expertise in physiology, anatomy, genetics, physics, biomechanics, and the study of motion provide the driving force behind BioMech’s team of innovators. The AccuLock ACE’s mallet head is milled from 6000 series aluminum, hard-anodized, and laser etched and available in blue or black and weighs 362 grams, while the TOUCH blade is forged and milled from 303 stainless steel, finished using Physical Vapor Deposition (PVD), laser etched and available in titanium and midnight black, and weighs 437 grams.

Both models have a forward lean angle of 12.5 degrees, positioning the handle in comfortable contact with the leading forearm and placing the shoulders at the appropriate angle to permit optimal rotation. A 13-degree lie angle and innovative optical alignment system position the golfer directly above the ball and standing much more upright than with traditional putters, which have lie angles of 18 to 25 degrees. The rear-mounted shaft allows the golfer to see the entire putter face. This aids alignment, as do other alignment aids built into each model. The ACE putter is available in five lengths, to correspond to the golfer’s height. And now it can team up with Biomech’s brand new app for iPhone and Android, with works in harmony with a small, real-time putting analysis sensor that attaches to the putter in seconds and tracks every stroke, which can be analyzed later via the app’s Internet link.
$279.99-$299.99
biomechsports.com 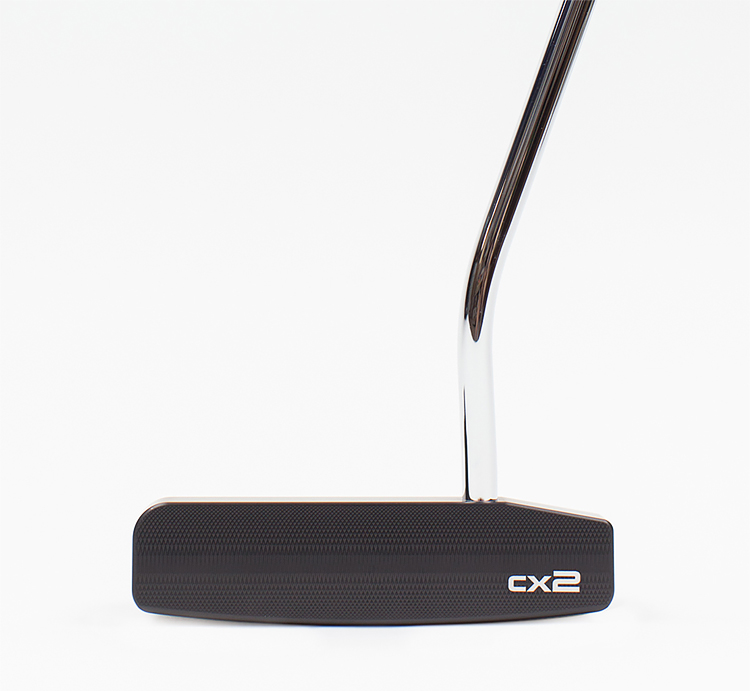 The GolfTips review crew was floored when they gave Florida-based Cure Putters’ CX2 Classic Series wand a spin (there’s a CX1 model, too, with a square trailing edge; the CX2’s is rounded). New for 2016 and a companion piece to the company’s RX1 and 2, which have a more unusual “pontoon” design, this is really a traditional perimeter-weighted blade-style putter on steroids — as in a 5-inch-long, 1 ¼-inch-deep face. That’s a good half-inch longer and quarter-inch deeper than most modern blades, which, according to Cure founder and retired architect Steve Davis, allows a much larger sweet spot and a truer roll no matter where ball meets face. That, combined with an extremely high moment of inertia (MOI) which prevents twisting at impact, leads to a very stable feel and incredible forgiveness for much greater accuracy and distance control, even on extreme mishits. Through a series of strokes from distances ranging from five to 25 feet, the CX2 produced a pleasant, soft-but-solid feel and an ever-so-slight “tap” sound. Its deep face and low loft rendered it nearly impossible to hit anything but the equator of the ball, which, in turn produced one true, end-over-end roll after another. The adjustable weighting system — six small removable screws, three on each side of the rear cavity — allows a far greater range of weight, from 334 grams to 376 grams, than any other putter on the market. Cure ships each stick with every screw installed, and you adjust by removing from the “inside-out” to maintain heel-toe balance and the proper MOI. The putter’s all-aluminum body is strong and sturdy, but light, and its precision-milled face is as “soft” as they come, with no insert to deal with. Then there’s the CX2’s proprietary “Triangulation Alignment,” invented by none other than former PGA Tour player and head honcho Deane Beman — who loved Davis’s prototypes so much he invested in Cure — helps you line up your putt like an arrow for deadly accuracy. It all played out in spectacular fashion during an extended golf jaunt to Scottsdale, where GT’s editor buried more than his share of 15-footers.
$299.95
cureputters.com 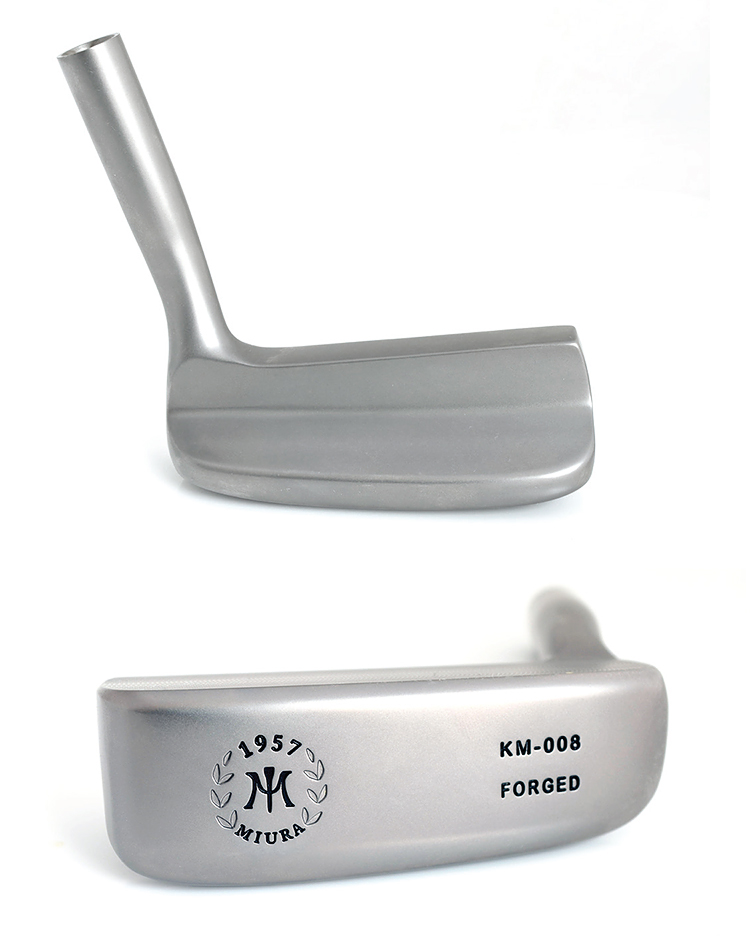 MIURA KM350 If you’ve heard of Miura Golf, you know the Japanese company — which uses the same steel in its clubs that is used in the best samurai swords — builds some of the most beautiful and great-feeling irons in the world. Wedges, too. Hybrids, even. But putters? Oh, yeah. Sure, they offer some great heel-toe weighted Anser-style wands, but the KM 008 putter writes a new chapter for the next generation of “the very best blade putter.” Stylistically, it’s a small-headed throwback to the golden era of blade sticks, when everyone from Jones to Nicklaus — all the way up to early-era Mickelson — found the cup with forged fury. Now it’s back. In 2014, Miura retired one of its most popular putters ever, the KM 350. Since then, master clubmaker Katsuhiro Miura has been busy designing the next generation of this classic. Like its predecessor, the KM 008 is forged from a single billet of soft carbon steel. The Miura forging process creates the industry’s tightest grain structure, with similarly tight manufacturing tolerances. The heavy heady releases beautifully through the hitting zone and even off-center strikes keep the ball on line. It’s that solid — truly a better player’s dream. “Golfers welcome that handmade touch to their golf bags,” says Bill Holowaty, Miura’s vice president of product strategies. “The adjective we hear is ‘butter soft,’ but what’s really in play is ‘solid’ — no vibration up through your hands. We’re putting the same weight of our bigger models into that smaller head. It just wants to get to square at impact.”
$450
miuragolf.com 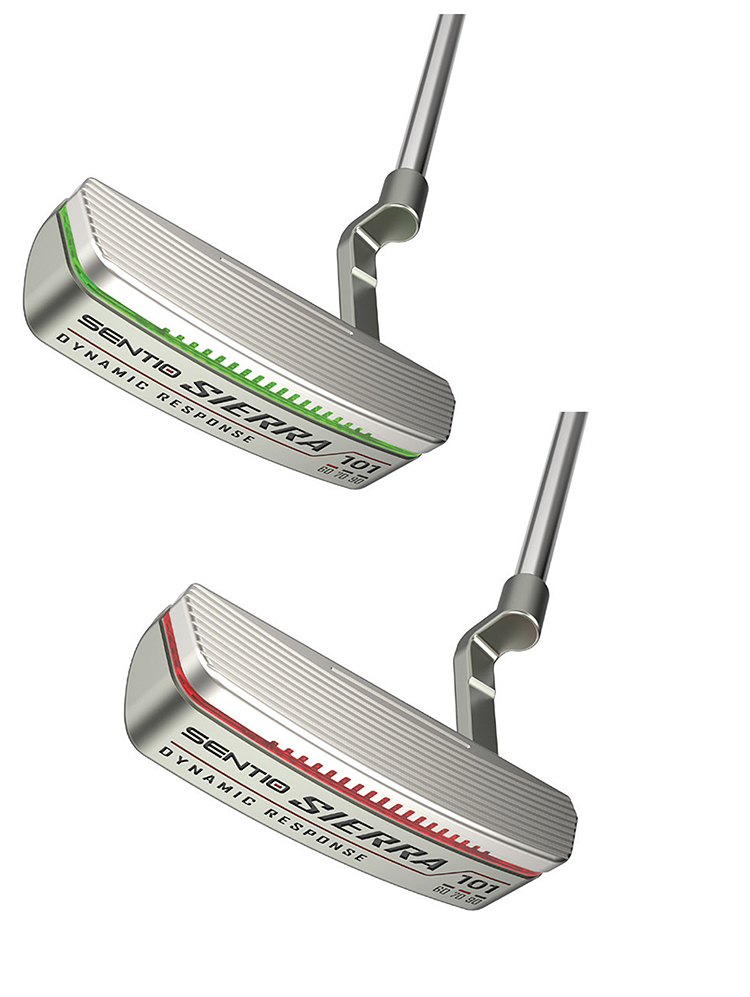 Sentio Sierra 101 Putters It was love at first putt as Golf Tips tested out Sentio’s technology, called Dynamic Response, at the PGA Show in January. One 12-footer after another drained on the synthetic green thanks to a feel you just can’t find in other wands. The difference? Sentio separates the entire stainless steel face from the rest of the putter head with a vibration dampening polymer core. “This construction softens the feel of impact while keeping some of the pop, which we have found is critical for good distance control” explains Jim Varney, Sentio’s president. “And because the face is completely isolated by the core, we can provide a range of response levels simply by changing the durometer, or hardness, of the polymer.” The Sierra 101 is available in three models, each with a color-coded core; green for soft, red for medium, and blue for firm. Other benefits, such as perpendicular alignment, perimeter weight distribution, and off-center forgiveness shine through the putters’ unique construction. Sentio verified their designs in accuracy tests against three popular blade putters from the biggest names in golf. “After analyzing hundreds of putts from 12 testers of different skill levels, we found the Sierra 101 was the most accurate; eight percent closer to the hole on average than the CNC milled putter and 16 percent closer than the insert. This shows that Dynamic Response technology can make it easier to control distance, which leads to better accuracy and lower scores.” The Sierra 101 line includes three blade putter models: 101-60 Soft, 101-70 Medium, and 101-90 Firm.
$249
sentio.com