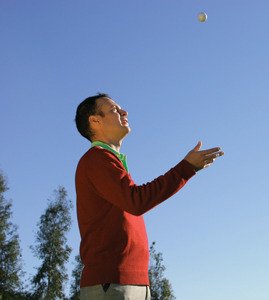 Golf ball fact: Most of the multi-layer, urethane-covered, high-performance models won't provide significant benefits for anyone who swings the driver less than 100 mph. These models are built with cores and mantle materials that require a lot of compression in order to create the desired high velocity.

If your swing lacks the speed to utilize the benefits of this design, fear not. Check out the new three-pieces with firmer Surlyn_¨ covers and softer cores. This allows the average swinger to activate the distance and spin benefits of today's reactive centers. These models provide an excellent combination of distance (especially for the average swinger), durability and solid short-game performance. Plus, they're moderately priced.

Cover Story
Over 90% of a modern golf ball is consumed by the core, a huge mass of highly energized synthetic rubber just dying to explode. But it's hard and wouldn't feel very good or spin very much if it weren't for the cover. Modern covers employ softer materials such as urethane, which add feel, but are designed thin enough to allow the core and mantle to work their magic. However, that's not to say the cover exists only to relay a sensation. First, the cover houses the dimples, which are an absolute necessity to help the ball achieve height and fly in the air without veering in all directions. Second, covers can influence spin. The softer the cover, the longer it will interact with face grooves and achieve higher spin rates.

Mantle Piece
There's a good reason why three-piece, or mid-layer, construction dominates–it works. Basically, the mantle regulates how and when you activate the core, usually based on swing speed and force. That's how today's balls can achieve low spin distance off the driver (the mantle regulates lots of core usage) and high-feel, high-spin performance off an iron (there's less core usage). Furthermore, it exaggerates spin or distance by allowing the cover to be made very thin and the core very large without either dominating the design (unless it's meant to). Truly, this small layer of ionomer has changed the game forever. Speed Center
Just a few years ago, cores were either very large or quite small, depending on what you needed. The large-core, two-piece models were built for distance, and that method holds true today for all golf balls. Whether you prefer low-compression models, ultra-distance models or a higher-spinning Tour-style ball, you'll find each houses a huge, synthetic rubber core. This is where speed and distance come from. Some are energized or otherwise manipulated to release as much energy as possible at contact. Feel and spin? They have nothing to do with the core. This is the powerplant.

Material Matters: Polybutadiene
The polysyllabic material polybutadiene is a synthetic rubber concoction rooted steeply in the tire industry, but ever since golf ball winding machines shut down for good a few years back, it has become the dominant–and we mean dominant–ingredient for golf ball cores, regardless of their design to compress easily for slow swingers and spin like tops for more skilled golfers. Polybutadiene's ultra-resilient structure, its ability to withstand low temperatures and take thin hits from a 2-iron without cracking has made it not only popular for golf balls and tires, but also for many automobile parts such as washers, hoses, belts and gaskets. Now, we're not necessarily saying your golf balls are part Ferrari, but you get the idea.
–Ryan M. Noll

Dimples, Dimples, Everywhere: The Bottom Line On Ballistics
Early golf balls sported smooth exteriors, which the craftsmen of the time thought was the best way to make them travel far. What golfers and golf ball makers soon learned was that these gutta-percha models didn't start performing well until they were broken in, meaning they flew farther once they got nicked up through use. Eventually, gutta-percha golf balls came "pre-nicked," or dimpled, and thus, the study and application of aerodynamic theory became an integral part of ball design and performance.

The simple concepts that started with patterned chisel marks have obviously come a long way, as R&D departments at every major golf ball company now spend untold hours developing unique and effective ways to maximize ballflight. The key concept they utilize to do so is simply this: A rotating object in flight, with a dimpled surface, creates a layer of air around it, which in turn creates wind resistance and air pressure beneath it. This phenomenon helps the ball rise and hang in the air significantly longer than one without a rough surface. So the next time you're shopping for golf balls, pay a little more attention to the dimples–they're not just there for the looks, but actually have a major effect on trajectory, distance and hang time. [Below: Wilson's Phd–Pan Head Design–dimple pattern is shallower and sharper than most existing patterns. It's said to lessen drag and increase distance.]
–Mike Chwasky

How To Buy A Golf Ball
Golfers often ask Ben Alexander, PGA, which ball they should play. The teaching pro at Poppy Hills Golf Course in Pebble Beach, Calif., and 2004 Northern California PGA Teacher of the Year assures them that "amateur golfers get overwhelmed by the manufacturers' marketing programs that if you play their ball, it will go farther. Or if you play a particular ball, it will spin more. Or with all of these extra dimples, this ball will go farther and straighter. Wow, that's a lot to digest for the average player."

Alexander offers a few simple tips when searching for the best ball for your game. "Consider how far you hit your driver. If you hit it long, then you need a ball with a softer feel for more control. If you hit it short, I would recommend a harder ball for more distance."

What about spin? Again, Alexander has some sage advice. "When you hit the green, does your ball stop with backspin or does it hit the green and roll? If the latter, try a ball with more spin. Around the greens, do y