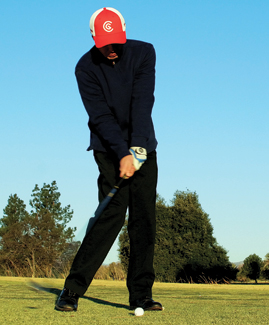 Iron design has been evolving since the earliest days of golf. Though crude and often unwieldy, the first primitive tools quickly proved to be indispensable in situations where accuracy was the primary goal. In the modern era, the iron has become the staple of the set, and accordingly, iron designs are now better than ever. Of course, muscleback blades are still around for the most accomplished players, with some that actually incorporate advanced technologies to make them more player-friendly than your father’s VIPs or Goosenecks. Game-improvement designs, which now dominate the iron market, feature multi-material, perimeter-weighted designs that allow all types of players to hit towering approach shots from all types of lies. And what’s left in between? Combo sets, which meld the best of shotmaking in short irons, and extreme forgiveness in the shape of a hybrid as a long-iron replacement. So you ask, have we come a long way since the early days of raw iron and hickory shafts? You bet we have.

Be Picky!
When it comes to irons, golfers tend to get picky. Reason being, irons are quite sophisticated and each set is designed to accommodate a different type of player. This begs the question, what kind of player are you? Do you like to work the ball? Is distance a big factor for you? Either way you slice it (no pun intended), choosing the right iron set means selecting the most important clubs in your bag. Why? Not only are there more irons in your bag than any other club (even though that number is decreasing), you’re more likely to hit more iron shots than you will with any other club except for your putter. So, before you spend a few dollars, assess what kind of irons you want, what you want them to do and, most importantly, GET FITTED. Iron fitting is a must if you truly want to see better results, and don’t forget to get the right shafts. That, too, can make a big impact.

A New Tradition
Though the forged blade is slowly becoming only a bit player in the iron game, they still look and feel the best—if you can handle them. For those with the talent, blades like Mizuno’s MP-67s are more advanced and even a bit more player-friendly than the old-school models that hacked up golf courses all through the ’70s and ’90s. Features like Mizuno’s Cut Muscle and Grain Flow Forging techniques now allow for true blades that dampen some unwanted vibration on mis-hits and provide superior shotmaking consistency. Other advances to look for in the blade market are new clubhead materials, a variety of sole grinds and degrees of offset, progressive set makeup and outstanding custom-fitting options.

Techno-Blades
Better players still demand irons that feature a specific type of profile. Limited offset, thin toplines, relatively sharp sole designs with less bounce and compact clubheads are all part of the formula. But even the best players in the world are less concerned with appearances and more with performance these days, and players’ clubs are slowly but surely taking on a new look. Exhibit A is TaylorMade’s r7 TP, which is built with all the aforementioned players’ characteristics and more. Most notably, TaylorMade engineers designed the TP with the company’s Inverted Cone Technology, which increases COR for greater ball speed, more distance and enhanced forgiveness. Basically, it’s a game-improvement blade, believe it or not.

Hollow Bodies Are Here To Stay
Game-improvement is a relative term. For some, it means a blade with a tiny bit more offset or a slightly wider sole, while some expect sole weights, graphite shafts and flexible clubfaces. When it comes to iron designs, however, many players wouldn’t expect what the HiBore irons bring to the table. Featuring Cleveland’s Inverted Crown Design and Full Hollow Construction, the HiBores are more hybrid, less iron, with the performance to prove it. A low and deep CG location promotes high launch angles throughout the set, making it easy for all players, even those with slower swing speeds, to get the ball airborne with an optimal trajectory. An extremely wide sole and added sole weight enhance performance from all types of lies.

Multi-Material Performance
Some companies like Nickent have taken a unique and innovative approach to iron design by letting go of the old and being brave enough to bring in the new. Spearheaded by industry veteran John Hoeflich, the 3DX irons are a great example of what a club designer can do with a bit of creativity and a bunch of different materials. Consisting of a composite cap and two heavy steel plugs at the rear heel and toe areas of the clubhead, which is hollow, by the way, the 3DX Hybrid is made to launch the ball high and produce maximum distance. Mated with matching hybrid woods that are designed specifically to bridge the necessary distance gaps, the 3DX set could be the model for what will become the standard in iron design in the very near future.

Understanding Our Charts
Clubhead: The primary material from which the club is either forged or cast, usually a form of stainless steel or softer-feeling carbon steel.
Clubface: The material used for the strike area.
Design: Here you’ll find whether the club is forged or cast and its general shape. Basically, irons fall into two shape categories—blades or cavity-backs.
Size: Standard, midsize or oversize.
Clubs: Lists the clubs available in the line, the presence of extra wedge options and whether or not the clubs are available for lefties.
Shafts: These are the stock graphite and steel shaft offerings. Almost all irons are available with custom shaft options, however. See the manufacturers’ Websites for more details.
Features: The primary design elements that make the iron noteworthy.
Advantages: How the primary design elements are meant to elevate the club’s performance.
Benefits: A general recommendation as to which skill level or player type would best be served by the iron model in question.
What We Like: We have our preferences, too. A quick description of what impressed us in our review and on-course testing.
Lineup: The other models available from the manufacturer.