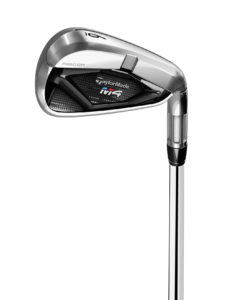 TaylorMade says RIBCOR technology works in conjunction with Face Slots to stiffen the area outside the scoreline area while retaining flexibility and COR in the area inside the Face Slots. When these technologies are implemented simultaneously, the company says performance benefits are amplified. The outer structure of the iron remains stiff, while the face remains free to flex during impact — enhancing energy transfer that leads to increased ball speed.

By efficiently focusing impact energy directly back to the ball, off-center hits see higher ballspeeds, more carry distance and improved dispersion. RIBCOR technology also allows for placement of additional mass in the heel and toe areas of the head, resulting in significantly higher moment of inertia (MOI) than the corresponding 2017 irons. This combination of benefits provides irons with RIBCOR technology a substantial increase in overall forgiveness.

M4 irons (4-7) utilize proven TaylorMade technologies made popular with previous models of the company’s irons, including Face Slots and Speed Pocket™, as well as a new, redesigned off-center Inverted Cone Technology (which is also found in the M3 irons). Each technology has been individually optimized specifically for M4 to deliver incredible distance and forgiveness. Additional technologies in the M4 include a Fluted Hosel 2.0, an ultra-thin 1mm topline along with the company’s thinnest-ever leading edge.

Each M3 iron (3-7) also incorporates many of the same proven technologies as the M4 irons: Face Slots, Speed Pocket and a redesigned off-center Inverted Cone — all optimized specifically for the M3 to provide players with distance, height, forgiveness and straightness. Additional technologies in the M3 include a 180° Fluted Hosel, a 360° Undercut and individually sized tungsten weights to locate head CG for optimal launch and ballspeed.

Check the price of M4 irons on Amazon!

Check the price on M3 irons on Amazon!