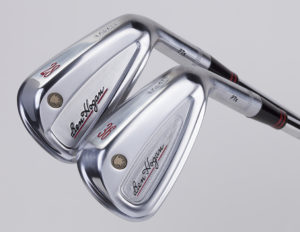 With new ownership and a new marketing and sales gameplan in place — including demo, trade-up and factory direct distribution —  Ben Hogan remains committed to producing the best-performing and best-feeling golf equipment in the world. Says company spokesmen, “By eschewing the traditional golf equipment distribution model, the company minimizes costs and eliminates retail mark-up and is able to offer the high-quality Ben Hogan products to serious, avid golfers at factory-direct prices. They’ve long concentrated on their iron lines, and they still do — with wedges and hybrids filling out an impressive product plan. The Ben Hogan PTx and Edge irons lead the way.

PTx irons are, says the company, “the most technologically advanced Hogan irons ever.” Each iron is co-forged from Carbon 1025 steel.  The long irons incorporate a heavy tungsten insert while the shorter irons have a titanium insert allowing for the CG to be optimized in each clubhead. This “co-forging” process creates a Linear Center of Mass consistently positioned throughout the set. The PreciseLoft System provides for uniform four-degree loft separation between all irons. This transitional iron is designed for the serious player who is gaining skill and an accomplished player looking to up his game. Check the price on Amazon! 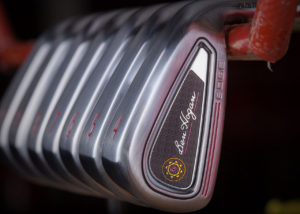 The original Ben Hogan Edge Iron was introduced thirty years ago. Golfers played the first Edge Iron because it looked and felt like a player’s iron but offered the same forgiveness and playability of a less attractive, investment cast, “game improvement’ iron. The new Ben Hogan Edge is engineered with this same principle. Golfers can actually feel what they are doing right or wrong at impact. However, the new Ben Hogan Edge Iron features innova-tive technology to help minimize the effect of mis-hits. First, to achieve more forgiving perimeter weighting, every Edge Iron has two separate forged parts. The hosel and back frame are forged first, then the forged face is la-ser-welded into place. The hollow head construction also allows the thickness of the club face to vary — the longer irons have a very thin, yet strong face for exceptional distance, even on shots struck on the toe or heel. The mid and short irons incorporate a progressively thicker face design which provides for a solid feel on scoring shots. On average, the Ben Hogan Edge Irons are 12 percent larger than PTx Irons. Shots struck closer to the toe or heel, or high or low on the face will perform much like they were hit on the sweet spot. They are also slightly off-set, while Enhanced V-Sole Technology benefits players of all skill levels. Edge irons are available in mid-high lofts preferred by the majority of Ben Hogan iron players.