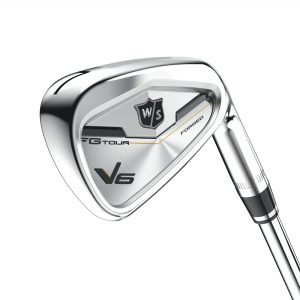 Wilson Golf often doesn’t get the recognition as its larger competitors, but that doesn’t diminish its products, particularly its irons, which created quite the buzz at the PGA Show’s demo day earlier this year. The Wilson FG Tour V6 irons are testament to the company’s iron heritage with modern technology. Wilson says the V6 irons combines playability with Tungsten sole technology to control mishits. While the FG Tour V6 is a cavity-back design forged from 8620 steel throughout, Wilson says the design uses multiple materials to create better performance, the most significant being 20 grams of tungsten weight in the middle and long irons that help add more perimeter weighting for better feel and forgiveness. The short iron (8-PW) do not have the added tungsten weights.