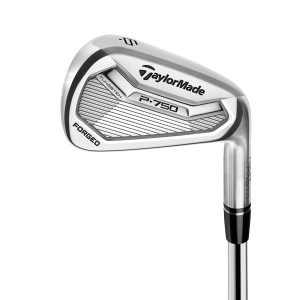 TaylorMade’s P750 Tour Proto irons found their way into Jason Day’s bag and made their public debut at the PGA Show. The P750 Tour Proto irons are true forged blades, each with a shallow cavity, and made of 1025 carbon steel. Each iron is created using a new, multi-step forging process that culminates with a “high ton-nage’’ strike, three times more forceful than a standard forged press. This process ensures precise, near-net head shaping requiring minimal hand polishing, resulting in a pure “players’’ iron with soft feel. The face and grooves are CNC milled for high precision, as is as the back cavity of the iron. TaylorMade says the extra step of milling the cavity ensures that the face thickness, center of gravity) position and weight distribution are maintained to the highest standard. P750 irons feature a thin topline (thinner than the P770) and minimal offset for a blade-like look preferred by our Tour players. TaylorMade says the P750 irons each incorporate a narrower sole and tighter leading edge for improved turf interaction. For the P770, engineers deliver a true Tour iron for highly skilled players while simultaneously providing playability improvements that create a great playing experience for the better player. P770 also features a unique forged 1025 carbon steel face/hosel and precision-milled faces and grooves along with 70-gram tungsten back-bar weighting in the mid and long irons and a one-piece forged cavity back construction in the short irons for added feel and control. It has higher MOI for ball speed consistency, thus more forgiveness, and has a lower center of gravity which creates a higher launch angle than its predecessors.
Set of 3-PW: P750 $1,600, P770 $1,200 | www.taylormadegolf.com