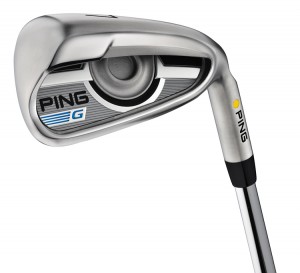 Building on knowledge and drawing inspiration from sources as diverse as dragonfly wings and 18-wheelers, the Ping G series of drivers, fairway woods, hybrids and irons, again advancing speed, distance and forgiveness to new levels. This year PING went one step further, creating a new club category with the G Crossover, combining the best of hybrid and iron technology. A close-up photograph of a dragonfly taken by John Solheim was the inspiration for the primary innovation in the driver ($435). Solheim was intrigued by the wing structure and shared the photo with a group of engineers. Inspired by biomimicry, an approach to innovation that emulates nature’s time-tested patterns, they created Dragonfly Tech-nology. The complex exoskeleton design yields PING’s thinnest (0.43 mm) and lightest crown to date, saving eight grams while creating an intricate and stable structure. The weight savings helped drive the center of gravity lower and deeper than any PING driver, increasing dynamic loft and elevating MOI for more distance and forgiveness. Researchers also studied the base flaps that minimize large-scale vortex shedding behind 18-wheel semi-trailers and integrated their learnings into the G drivers to improve aerodynamics and increase speed. Vortec Technology on the back of the club and turbulators on the crown contribute to reducing drag 37% in the impact zone, yielding greater clubhead speed and ball velocity for measurable distance gains from all swing speeds. The G iron ($110/$125 per club) utilizes COR-Eye Technology, which activates the sole, face and top rail in flexing for consistently faster ball speeds across the hotter face. The entire G set is heat treated using a specialized process that creates Hyper 17-4 alloy, which is 40% stronger than traditional 17-4 stainless steel. Metallurgical advancements combined with COR-Eye Technology provide four times the face flexing with improved stability. Weight saved from the face was allocated to the low toe and perimeter. The new Crossover ($247.50) combines the precision, workability and control of an iron with the ball speed and forgiveness of a hybrid. The high-strength Carpenter 455 steel face is precision machined to an optimal thickness for greater face flexing, faster ball speeds and longer results. The flat face, narrow top rail and appropriate offset deliver iron-like accuracy and workability. A cascading internal sole engages the entire face, sole and top rail in flexing to maximize distance. Extreme heel-toe weighting helps locate the center of gravity low-back and expands the perimeter weighting. Nearly all golfers struggle getting the ball in the air easily with fairway woods. To solve that, the G fairway woods have a lower lead edge that yields 12% higher face impact, relative to the G30 series. The Carpenter 455 steel allows for a thinner, precision-machined, variable-thickness face. The cascading sole design engages more of the structure in face flexing, resulting in faster ball speeds and higher launch. Ping’s thinnest crown ever in a fairway wood means discretionary weight has been used to move the CG lower and farther back, making it easier to get the ball airborne. A unique process adds friction to the face for reduced spin. Finally, the G Series hybrid’s ($247.50) tiered internal sole helps activate face flexing to power the ball off the face faster for greater distance. The ultra-thin crown allows for a low-back center of gravity to ensure high launch, reduced spin and a higher MOI for forgiveness. Like the G fairways, a unique process adds friction to the face to reduce spin. Crown turbulators and contrasting grooves on the face help assist in aim and alignment.
www.pinggolf.com