When summer heats up and the days get lazy and languid, a lot of golfers get their rounds in as early as possible, leaving a big chunk of daylight to do other stuff. That’s where a healthy dose of golf reading come into play. Whether you’re looking for faith on the fairways, care to take a two-month journey to every corner of Scotland or want to pay homage to the King during your down (or vacation) time, we’ve got some fine words teed up.

www.simonandschuster.com | Check the price on Amazon! 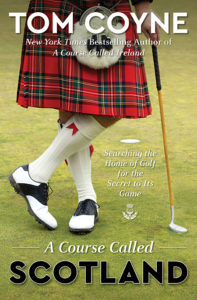 The long-awaited sequel to Coyne’s uproarious travel saga and golf nut memoir, A Course Called Ireland, almost didn’t happen at all. Since penning that book based on his hilarious hike around the Emerald Isle, in which he played every course in 120 days while lugging his sticks on foot, Coyne had settled into a comfortable life as husband, father, university professor and writer (he’d also spent a year and a half trying to make the PGA Tour for his book Paper Tiger). But a phone call from a mysterious dude named Robert — we learn more about who he really is near the book’s stirring finale — got Coyne’s wheels spinning toward a plan to play every links course in England and Scotland over 60-odd summer days, some of them with his family in tow. “Robert” would show up for a round here and there, as would other half-crazed golf pilgrims whom Coyne either knew or had solicited to come along in a radio interview or via e-mail exchanges. Oh, and there’s another twist: He would end the saga trying to play his way into the Open Championship, which meant he had to get down to a scratch handicap before the trip even commenced just to nail down a spot in a qualifier at Bruntsfield Links in Edinburgh. Hello, epic practice sessions and rounds away from the family. He pulls it off, starting the journey near Royal St. David’s in southeast England, making his way to Wales and northern England and finally into every corner of Scotland itself. Fighting through physical exhaustion, self-doubt, homesickness and spates of nasty weather, Coyne knocks out 111 full or partial rounds on 107 courses, sometimes three rounds a day, in his search for the “secret” of great golf. It’s no secret that his passion for the game (and life) shows through on every page, and we get to follow his every step through modern golf’s birthplace — with a coda on a plot of hallowed American golf soil down Georgia way. A worthy trek? Aye.

www.zondervan.com | Check the price on Amazon! 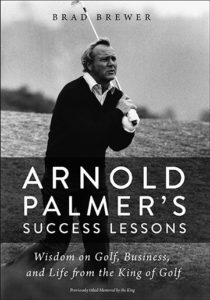 Golf Tips Top 30 instructor and longtime teacher Brad Brewer has re-released his book Mentored By The Kingwith a new title, but no less respect and admiration for his dear friend, employer and, yes, mentor, who died in October 2016. Brewer ran Arnold Palmer Golf Academy for two decades before opening a school of his own in Orlando, modeling his approach toward golf and life after the King and absorbing, up close, as much of Arnie’s common-man magic as he could — his mix of power and grace, of confidence and humility, of deep respect for the game and his never-ending quest to conquer it with work ethic and unquenchable spirit. With a breezy, conversational writing style broken into short, pithy chapters punctuated by motivation quotes from Mark Twain, Winston Churchill, Zig Ziglar and many others, Brewer uses anecdotes and direct Arnie quotes to illustrate how to turn challenge into triumph, on and off the course, through optimism, self-belief, dedication, gratitude, consistent practice, embrace of risk and unwavering faith. He never gets preachy; rather, he puts his observations and recommendations for better golf and brighter living through the dual lenses of common sense and all-too-uncommon reverence for life and our God-given potential. Arnie left us with the feeling that we knew him personally, but Brewer truly did know him. In this book he generously shares their relationship as fellow golfers and simple men while offering a road map for enjoying the game more than ever, a la The King.

www.triumphbooks.com | Check the price on Amazon! 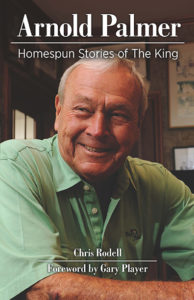 Like Brad Brewer’s tribute to his old friend and employer, this new look at Arnold Palmer’s life and legacy is based on longtime sportswriter Chris Rodell’s personal interactions with the favorite son of Latrobe, Pennsylvania — including some 100 hours of interviews — but instead of taking a more instruction-centered track, Rodell (who moved to Latrobe in 1992 but didn’t meet Palmer until a decade later) explores the great man’s life not only through those conversations and thousands of personal documents, but from the perspectives of his neighbors, friends, personal assistants and business acquaintances … 200 interviews in all. What emerges is a portrait of a regular guy who, through epic charisma tempered with small-town humility, became perhaps America’s all-time best-loved golfer and a well-branded millionaire without ever losing connection with his humble roots — including growing up in a ramshackle farmhouse in which Palmer would wake up on winter mornings with snow on his bed. Rodell has a gift for writing in a humorous, conversational tone that brings out his obvious love for his subject while playing up Palmer’s irreverent Everyman side. He ends the book with a detailed timeline of the King’s career. There’s no slipping into hagiography; Rodell keeps his words warm, winsome and straight-shooting. Mr. Palmer would approve.

www.zondervan.com | Check the price on Amazon! 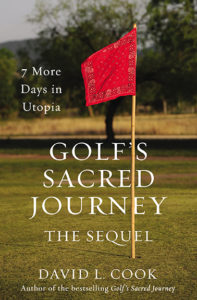 In the original installment in what’s become a Golf’s Sacred Journey franchise, mental coach, entrepreneur and author David L. Cook established his teaching credo of “freedom in the chaos” via two characters — a hot-headed young Texas pro named Luke Chisholm and an award-winning teaching pro-turned cowboy-sage Johnny Crawford, whose Utopia ranch stands at the crossroads between earth and heaven, fear and faith, despair and destiny. Crawford is matter-of-fact, rough-hewn yet soft-hearted conduit between humans and their true potential, a horse-whispering wise man who, in the first book, teaches Luke an unconventional putting technique that puts him on the verge of winning the Texas Open while also coaxing Luke to confront and conquer his fears. Cook doesn’t reveal if the final winning roll drops, but in this book we quickly discern that it did — qualifying Luke for the U.S. Open. Luke returns to Utopia for a tune-up and Crawford throws him more soul-opening curve balls — how to initiate the golf swing in a new and unusual way while releasing letting what he calls the “dream seed” grow into belief in one’s self as a worthy child of God. As he prepares for the biggest tournament in the U.S. firmament, Luke meets several other “teaching” characters and comes face to face with a familiar foe, the world No. 1 nicknamed “TK the Lion” who was also a Crawford acolyte in days past. Turns out the Open itself is only incidental to Cook’s Bible-backed message of what’s really important in life, on and off the course. The book’s conclusion includes a somewhat off-putting sales pitch for the Face-On Putter and a pilgrimage to the actual “Utopia” in Texas — this is America, after all — but in his quest to reconnect golfers with their all-but-forgotten dreams and kindle the kind of faith that can carry them to their best selves, Cook’s heart is in the right place.