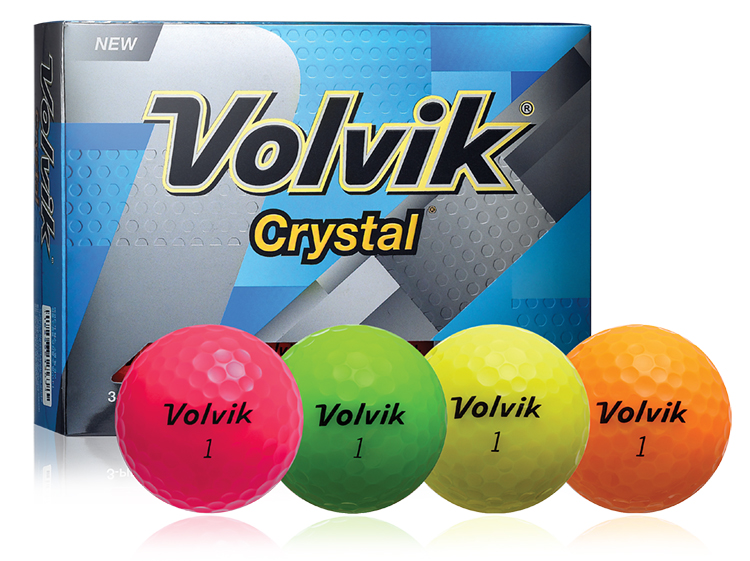 This company — by far the leader in the colored golf ball market — has rolled out four new models for 2016 with the goal of covering every skill level and personal preference in softness, spin and feel. First up is the VIBE, a three-piece ball with extremely low compression mixed with high grade urethane cover — a great “soft” option for tour players, advanced golfers and beginners alike. VIBE stands for Very Intelligent Ball Engineering; combining a “players” ball with a soft feel off the club face gives the VIBE the perfect combination of distance and straightness off the tee shots due to a low driver spin. The 336-dimple pattern ensures an enhanced flight time, optimal greenside spin and the short game control that you would expect from a urethane three-piece golf ball. Volvik Crystal is also premium level three-piece ball that provides the ultimate in distance with a hyper-soft feel. An extended flight time and higher ball flight from the previous model is provided by a switch to a 322-dimple pattern. This longer flight time makes this ball the best option for players with a swing speed under 95 MPH to gain extreme distance, thanks to the combination of the innovative Power Core, Control Layer and Zirconium outer cover. Finally is The VIVID, the first matte-finished ball in the modern golf lexicon. Its bright vivid color increases visibility in the air and on the ground. “In our three plus years of exponential growth, we have never seen this kind of reaction to a new golf ball,” said Jon Claffey, Volvik’s national director of sales and marketing. “People are absolutely freaking out about how this golf ball looks. The best part about that is that once they put it into play, it is an even softer version of the Crystal that has all the amazing distance that has made it our number one best seller. We feel like we have a ball that will change the landscape of the golf ball market.”
$29.99-$35.99 | volvik.com 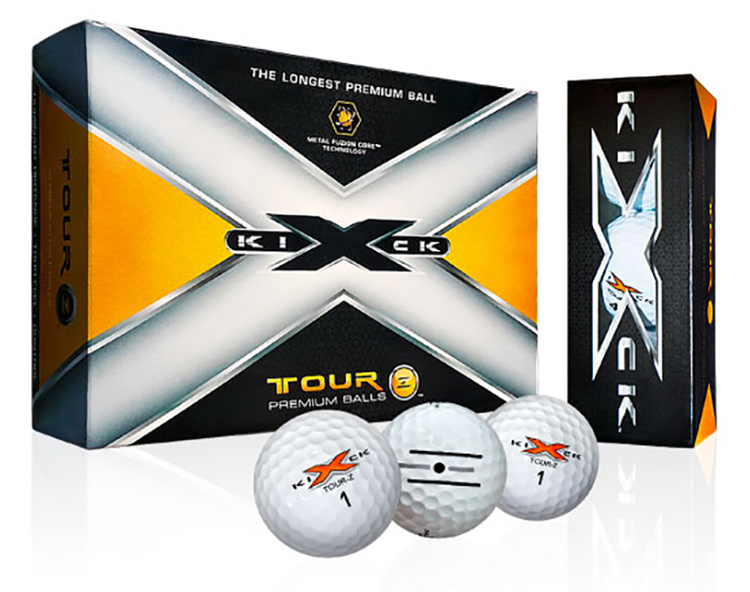 TOUR-Z BALLS
The Kick X Tour-Z was designed with two things in mind — distance and feel. Through an independent study done at Golf Laboratories Inc. in Southern California, tests showed that the Tour-Z ball out distances every other ball on the market. Unlike other balls that sacrifice feel for distance, the Kick X has a super soft cover that provides amazing responsiveness, allowing golfers to dictate their shots with greater control. The Tour-Z’s power mantle layer enhances ball compression to reduce driver spin and generate explosive launching power off the clubface, while the internal Metal Fuzion Core produces the highest level of C.O.R. available. Once you get to the green, the Unique Z Alignment system makes it easier than ever to line up to the cup and sink putts every time.
$45/dozen | medicuskickx.com

It’s been a few years since On Core blew onto the crowded golf ball scene with a truly revolutionary orb, a beast of a bunker-buster with a hollow metal core that finally passed muster with the USGA and made its way into the mainstream. Good thing, too, because one Golf Tips editor fell in love with it from the get-go during testing at Bandon Dunes in Oregon. A straight but distance-challenge driver, he was suddenly nuking it past his buddies and smiling down every fairway. Now, On Core is poised to make noise again with its new Avant ball, which boasts soft feel accompanied by excellent distance as well as improved control around the greens compared to other two-piece balls. Soft feel has been the direction for the next generation of golf balls from competitors. Typically two-piece balls don’t react the same as urethane balls on and around the green. They tend to hit and roll more on the greens. The Avant ball will have really good putting and chipping feel due to the lower compression and soft cover. In addition, it will exhibit good control going into greens with shorter irons and chipping, even out of the rough. “The hollow metal core golf ball we brought to the market is still an enormous hit in the golf world,” says Bret Blakely, On Core’s CEO.” Now, with the Avant, we have blended innovation and simplicity to provide golfers with a ball that has more distance and greater feel.” The 392 dimple pattern provides a high trajectory with both driver and iron shots which helps distance off the tee and stopping power on the greens. Clearly, On Core is on point with the Avant — and price-wise, it’s also unbeatable.
$19.99 per dozen | oncoregolf.com