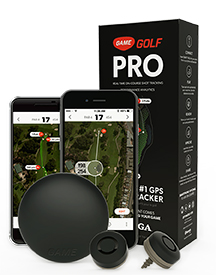 While the original Game Golf tracking system is still available with its belt-attached sensor, the Game Golf Pro is a godsend for folks who just can’t seem to incorporate that belt-tap into their pre-shot routines.

Instead it uses a stand-alone sensor that communicates via BlueTooth to new, smaller grip-mounted sensors dialed into each club in the bag via a smartphone app. Also, the new system filters out practice swings, second shots, third shots — any shot that isn’t the real one. In other words, you don’t have to go back and edit. And if you don’t want to use the app in real time but would rather save your stat analysis for after the round, the “home” sensor compiles all info for download later, which, a company rep says, “eliminates a pain point.”

But there are advantages to using the app during play — it has a great, detailed rangefinder, it syncs with the Apple Watch, and the GPS data comes from the sensor so it’s not draining the phone battery. Those are the three big hardware improvements.

You can also subscribe to a new smart caddie system for $4.99/month; it offers club recommendations, course strategy based on shot history, elevation numbers, weather reports and more. By the way, the original GameGolf is still available for $99 — it still has shot tracking, of course, but you’ll need to remember to tap that belt sensor.