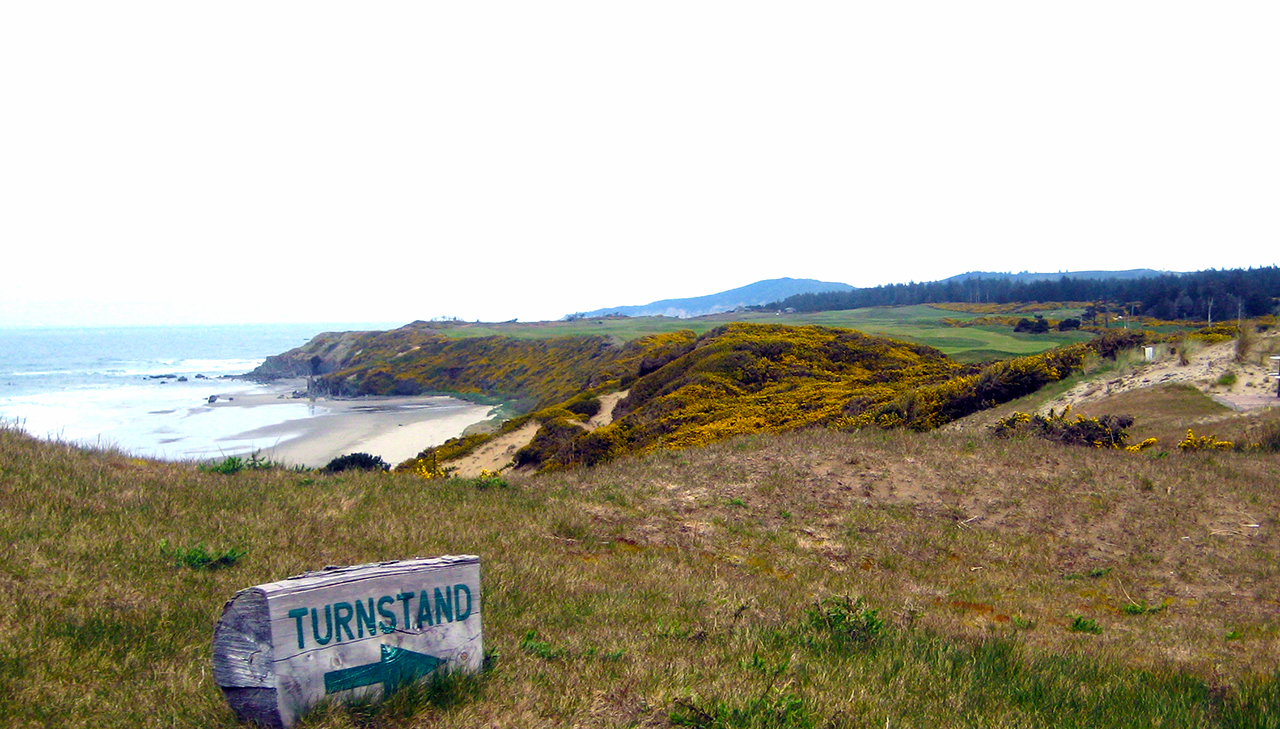 It was bound to happen. The mile of Oregon coastline just north of Bandon Dunes Golf Resort — a 400-acre parcel comprising golf’s Area 51, otherwise known as the Sheep Ranch — was just too tasty to keep off the public golf grid forever.

Bandon founder Mike Keiser and his partner from their Recycled Paper Greetings days, Phil Friedmann, purchased the land in 2000, thinking it would be a fun hideaway for them and their friends to knock a few balls around while swilling suds and telling tales.

While he was working on what would become Pacific Dunes, architect Tom Doak fashioned 13 free-form greens on the Sheep Ranch’s relatively flat linksland, including one on what is perhaps the finest natural cliffside green site in the continental U.S. — a triangle of turf named Five Mile Point because you can see five miles of Pacific coastline in either direction.

In the two decades since, thousands of hardcore Bandonistas have sought out a Sheep Ranch round with rabid determination. At one point they had to call the owner of a little golf shop in downtown Bandon, get their name in a special black book, then show up at a battered gate with cash in hand, where either a greenskeeper or Friedmann himself would let them in, show them the lay of the land and leave them to their “course for a day” devices.

Now those days are gone.

To help celebrate its 20th anniversary, Bandon Dunes recently announced that final shaping and seeding is underway on the 150 acres of Sheep Ranch actually zoned for golf —— and that the all-world architectural team of Bill Coore and Ben Crenshaw are doing the design honors.

After all, reports Matt Ginella on GolfAdvisor.com, Coore and Crenshaw somehow found a way to pull a 7,000-yard, 18-hole routing out of that 150 acres, including a whopping nine holes along the cliffs.

“I feel very good about Bill and Ben and that routing,” Keiser told Ginella. “Doak, Urbina, [Gil] Hanse and others could get about 14 holes on that land. Bill said he thought he could get all 18. And now they all want to know how he figured this out.”

“I was blown away,” added Urbina after visiting Bandon to see the start of the new Sheep Ranch. “I kept staring and wondering, ‘How did they do this?’ Now I know how. They get in and out of that Five-Mile Point several times. That was the answer to the riddle. And I’m simply amazed.”

It’s a bittersweet development for the hundreds if not thousands of folks who sought out Sheep Ranch as a chance to play golf as it must have been played 400 years ago, or close to it. I was one of those guys, playing Sheep Ranch several times over the years with several sets of friends ­— even as an eightsome.

I have a slew of sweet memories to show for my efforts, including the following one, from a story I wrote back in 2011 during a week-long Bandon blowout with three fellow journalists.

We went off-road for our first whiff of sea spray — down Seven Devils Road just north of the resort, left on Whiskey Run and through an unmarked gate to what may now be the worst-kept secret in links golf.

Officially it doesn’t exist. It barely has a name (the word “sheep” is in there somewhere) and its scorecard is issued on a strictly advisory basis, with a recommended routing to a dozen greens that rise out of the randomly mowed fescue in sometimes unexpected places — a couple of them occupying all-world headland that matches or surpasses anything at Bandon or Pacific Dunes, hanging on the wind-blasted cliffs as if out of some fevered dream.

Unofficially, it’s as pure as links golf gets, a true turn-back-the-calendar experience that gets the blood flowing at first sight. It’s unadorned alternate universe to Bandon’s foursome of world-renowned links courses (parts of which we could see on the other side of a huge dune to the south) and the resort’s attendant amenities. We were on the wild side. Any lover of “pure” Old World golf would get it, embrace how special it is if they’re lucky enough to play it.

Here’s how our unofficial, “off-the-record” round went down: We met a guy on a bluff. He pointed to the “first tee,” nothing more than a flat spot on a hill, cleared of its gorse and facing a mind-blowing Pacific vista. We headed out, devising the game as we went along, changing teams from hole to hole, with one member of the winning pair scoring the right to route the next one. Some greens we visited twice, some not at all. There were few if any clouds — a harbinger of the days to come — and we lugged our sticks through a steady 30-knot northern gale, the prevailing mid-summer direction though it was still early spring. We didn’t keep an aggregate score. Didn’t need to.

We took a break when we got tired, or thirsty, or hungry. As afternoon bled toward evening we ended up back at the SUV for a brew, a snack and some reflection. Then we headed out for a few more holes, the breeze watering our eyes but not drenching our spirits. Three 3-pars in a row? Why not? A par-8 to cap it off? Hell, yeah.

Back to the car for a brew and a cigar.

One guy, a photographer, disappeared toward the cliffs for his own kind of shooting. The sun dropped and in the glorious slanted light, the Course that Doesn’t Exist donned an even more gorgeous gold-green glow.

We had the whole place to ourselves for going on six hours and left grudgingly as darkness fell.

When it opens, the Sheep Ranch course (no word if that will be its final name) will have its own clubhouse and restaurant and, at some point a few lodging rooms. A road is being built to shuttle golfers from the main resort more than a mile to the south.

I plan to get up there for a tour of the site and, eventually, a round, or three. Stay tuned.

Get a sneak preview of the Sheep Ranch

Photo above: How the mysterious Sheep Ranch property could be seen from the northwest corner of Old Macdonald at Bandon Dunes Golf Resort