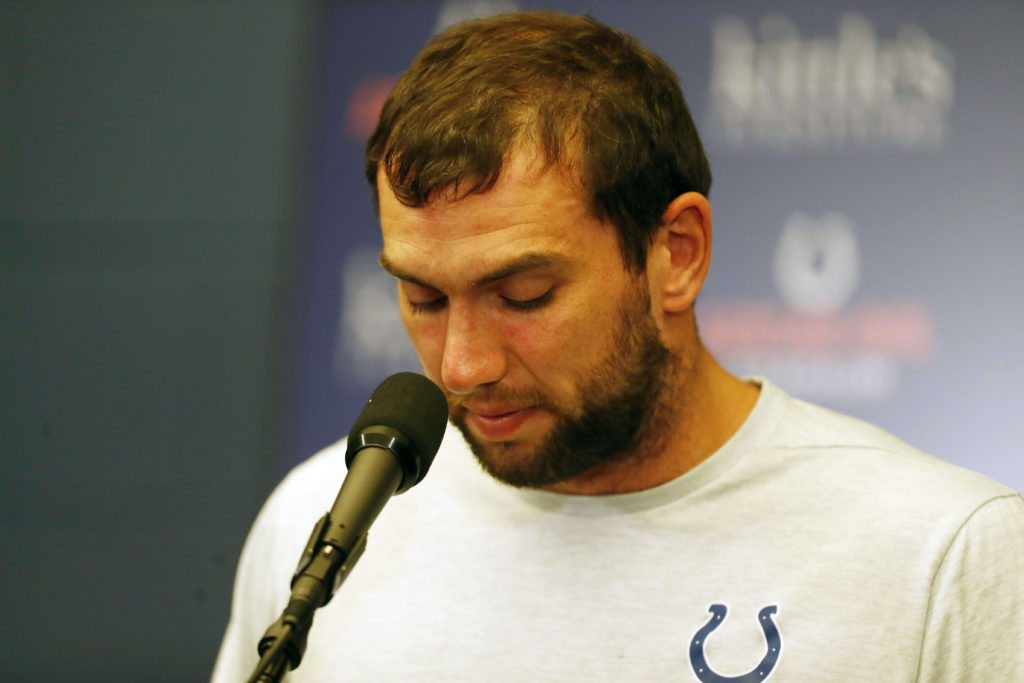 Andrew Luck is (was) a professional athlete. He made a lot of money entertaining millions of people for several years with his talent and hard work. He gave the state of Indiana hope that, at some point, another NFL Championship would come their way.

And now he’s hanging up his spikes, in the prime of his career, a couple weeks shy of his 30th birthday.

That’s what a lot of people apparently don’t get, including these so-called Colts “fans” who booed Luck as he left the field during their third preseason game.

Yes, by signing the line as the No. 1 pick out of Stanford in 2012, Luck became a privately paid public commodity, and in the years since he has honored that relationship to the best of his ability, through the myriad injuries that sidelined him, the playoff disappointments and just the brutal day-to-day challenges that are part of the professional football life. He racked up nearly 24,000 passing yards overall and led the Colts to two AFC South titles in his first three years. He was a solid team general, unfailingly upbeat, always sharing the credit for his team’s successes large and small.

But, as any well-paid athlete in any sport, golf included, who decides to leave the field of battle, he owes the public nothing more.

Nor would, say, Justin Thomas or Brooks Koepka or any other twentysomething Tour star owe the golf world one thing in the event one of them decided to retire.

This is a free country, right? Individual choice above all? Self-determination and all that, even if it’s not up to OUR expectations?

Indeed. And golfers aren’t exempt from that cultural fact. I’d say they are perhaps the best exemplars of it, considering they’re independent contractors.

Ironically, for the vast majority of Tour players, that fact keeps them going. Most of them don’t enjoy monster endorsement contracts and they don’t get paid for sitting on the bench, so they’re out there, playing through the pain. And believe me, there is pain.

No, golf isn’t on a par with football, or many other sports, when it comes to physical contact. The average professional PGA or LPGA player’s career last considerably longer — decades longer ­— than the 3.3 years the average NFL player sticks around.

Not that the day-to-day and year-to-year golf grind doesn’t take its toll.

Tiger Woods is, of course, the ultimate living example of that fact. He has swung the club millions of times since his dad, Earl, stuck a club in toddler Eldrick’s hands, and when, in the prime of his own career from, 2000 to 2008, he added punishing workouts to his routine, the litany of back and knee surgeries he endured were sure to follow.

And they did, along with the myriad personal, off-course travails, which no doubt helped fuel the physical setbacks.

So, Tiger all but retired for a while there. In fact, millions of fans figured he was done.

Then came the spinal fusion surgery in 2017, a physical Hail Mary on the order of any third-down bomb Andrew Luck ever threw on the NFL gridiron.

Somehow it worked, and Tiger came back, all the way back to the 2018 Tour Championship, and, this year, a fifth Masters title.

This is all bonus time, folks, and given Tiger’s recent on-course struggles, some golf pundits are saying he’s on the verge of retiring from regular competition for real. I don’t share that assessment. He’ll be back, he’ll be in the mix in Tour events and majors to come, but he’ll never be the Tiger he once was. We know that’s true. We accept it.

But if he did hang up his Nikes, who could blame him? Who could expect more from him after the most electrifying 20-plus years of golf success any human has ever produced?

Perhaps a reconstructed knee and a rebuilt lower spine isn’t the same as the lacerated kidney or never-quite-healing ankle-calf issues that kept Luck in an ongoing “cycle” of play-rehab-return over the past several seasons. Then again, in terms of affecting the golf swing and demanding constant care, Tiger’s injuries are on that same game-changing level.

So we’d understand if Tiger finally said, “No mas,” especially in his early 40s. We’d move on.

That Andrew Luck pulled the plug in his true prime — a la golf’s own Bobby Jones, who retired from competitive golf as an amateur at age 28, in 1930 — is shocking. But it’s not “the most Millennial thing ever,” or some sign of weakness.

It’s just a man making a decision, and it deserves everyone’s respect. We must honor it. Time to move on here, too.