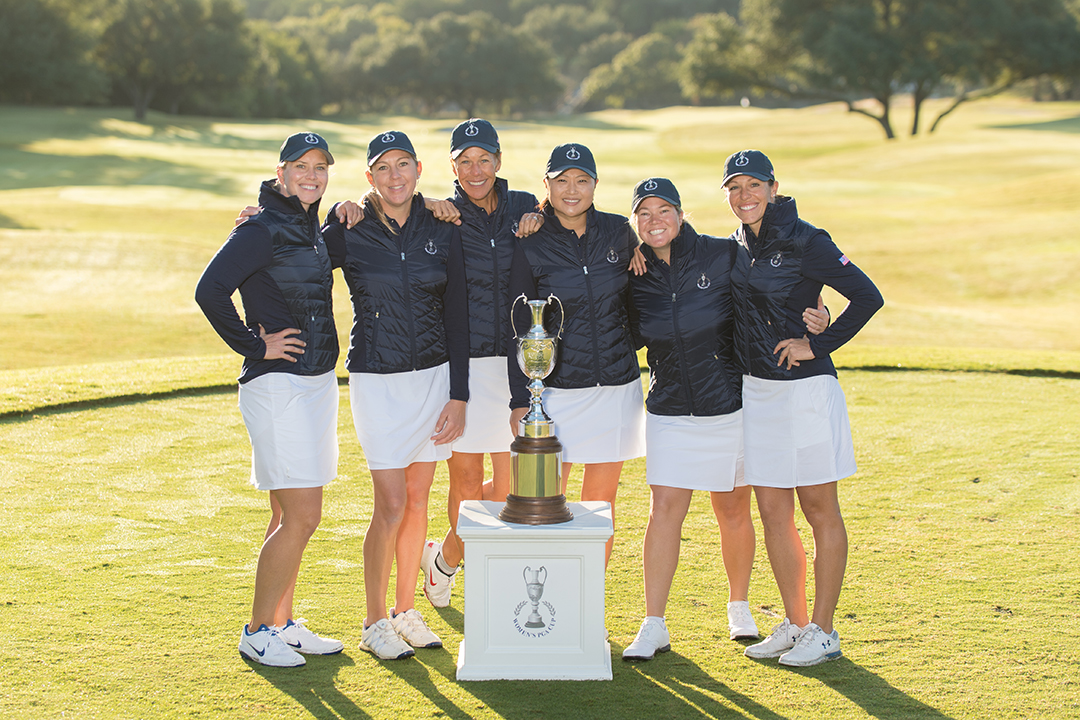 It’s been a busy year for Alison Curdt, a Golf Tips Top 25 Instructor and LPGA/PGA Master Professional, who teaches out of Wood Ranch Country Club in Simi Valley, California.

It’s also been a winning one.

They defeated teams from Canada, Great Britain & Ireland, Australia and Sweden at the Omni Barton Creek Resort near Austin, Texas, taking PGA president Suzy Whaley’s dream of creating a PGA Cup for women to full, triumphant reality. The three-day stroke-play event featured five players competing each day; the team’s top three scores after every round counted toward the final total. Only Curdt and team anchor Brittany Kelly from Indianapolis, Indiana, posted scores that counted each day.

Her game left her for a few holes in the middle of the final round including a triple bogey, but her self-assessment as a “grinder” came in handy. She snuck into a restroom, looked at herself in the mirror and told herself to help her team seal the deal. A couple birdies and 18th hole par save later, she did just that.

This is the second national tournament Curdt competed in this year. In June she was one of a handful of teaching pros to qualify for the KPMG Women’s PGA Championship — her sixth straight appearance in the event—at Hazeltine Country Club in Chaska, Minnesota. She missed the cut but, as she wrote in this entry of a week-long diary for Golf Tips, the experience was fuel for her improvement as a player, and a teacher.

The Women’s PGA Cup ended with her in the winner’s circle, and even more lessons not only for her, but for her students—and every golfer.

I caught up with Curdt this week as she returned to Southern California not only to pick up her teaching duties, but keep feeding her competitive fire.

What was the genesis of the Women’s PGA Cup?

The PGA membership has the PGA Cup. It’s been around for about 40 years. Historically only men have qualified for that team, because a woman, in order to qualify, would have to play from significantly longer distances, so the chances of a female ever making the PGA Cup team is pretty much slim and none.

That cup is America vs. Great Britain and Ireland. So when Suzy Whaley became president, it had been in the works to do a women’s version of the PGA Cup. It was announced at the beginning of 2018 that there would be a two-year cycle to accrue points, and the top five point earners would secure a spot on the team. There were a variety of tournaments that were selected that PGA Members could play it, so it was equal opportunity for everyone to compete for points, in addition to earning points at the local level, where, if you were your section’s player of the year [which Curdt was, for Southern California], you’d earn bonus points.

So, the point cycle ended at the end of August, and the top five women were solidified. We knew then we’d be part of this inaugural event. It will continue at least for two more cycles. We hope another country will pick it up and host, but the U.S. will host the next two cycles. The next one will be in 2021.

Did you know teammates before the event, competed with them or played with them?

Once it was created, we all started to look at who was finishing in the top and earning points. So we all started to get to know each other; over the past two years we’ve all built a friendship even though we’re spread out across the country. Ironically, all five of us played at the KPMG back in June. We played practice rounds together and started to create a friendship. By the time we got to the week of this event, we already had great chemistry. We were familiar with each other’s games because we’d all played with each other at some point, and just had great camaraderie.

What do you feel was your strength throughout the week?

I would say my strongest point is my grit factor. We all have wonderful mechanics, we all hit the ball really well. We have a long hitter on the team; we’ve got some great short game players. I think we all added to the mechanical piece very nicely. But I think what I brought to the team was stability and grit. When I had a couple of adverse holes throughout my round, I certainly stayed in there, didn’t let it disrupt me, and kept fighting to the end, especially on that last day, when I looked at the leader board and saw that the gap was closing between the USA and Canada. One of my strengths is to never give up and fight to the bloody end, till I can seal the deal. When things get tough, that’s when I really start to focus and make sure that I can complete my job.

As a teacher, what do these events do for you? How do they help you, change your changing stance and work with others?

I don’t think it necessarily changes my teaching stance, but it certainly creates an aura of relevance to the experiences my students are having. So when they’re playing in their member-member tournament, or club championship, or member-guest—that’s major for a lot of my students. Or if they’re going to an AJGA competition or even a collegiate event. The relevance of me competing and playing in events is very important, because I’m having the same experiences they are on the golf course, just on a different level. Whether it’s having a bad hole and trying to recover or dealing with anxiety before a performance — all the things students talk about. Or potentially being in a slump and trying to get out of it.

If I’ve gone through those things, it gives me more of a base to talk about it, because I might have just gone through it the week before, or the day before. My students enjoy knowing that we can relate on that level, and I can speak from experience, offer some wisdom and help them perform better.

You can right back and played in a event. How did that go?

It was a PGA drive, chip and putt competition. Like the kids’ event, but for adults. It was great to come back and see my section members, who congratulated me and had followed the team.

What’s next for you in the near term, and heading into next year?

I have a month to shape up and get some things in my game a little sharper. At the beginning of December is the LPGA Team National Championship in Palm Springs. It’s a big event. You can pair up with a buddy, and there’s two different formats over two days. There’s a lot of pride involved. That’s my last event of the year.

Then we’ll be looking forward to a busy schedule in 2020.